There have been sharp exchanges between the Fine Gael leader Enda Kenny and the Tánaiste Michael McDowell over leaks from the Mahon Tribunal about the personal finances of the Taoiseach.

Mr McDowell said that Mr Kenny's suggestions that he had been responsible for the leaks to the media were 'beneath contempt'.

Mr McDowell has said he 'utterly rejects' any suggestion that he was involved in leaking Mahon Tribunal documents about the Taoiseach's personal finances to the media.

As he wound up his manifesto launch this morning, Enda Kenny claimed that if the Taoiseach wanted to know who was putting out information from Tribunals he only had to look across the cabinet table.

Later on the RTÉ Radio's News At One, he confirmed he had meant Michael McDowell, prompting a furious response from the PD leader.

This afternoon Enda Kenny’s spokesman said he did not intend to allege the Justice Minister had been responsible for the original leak from the Tribunal about the Taoiseach’s financial affairs but had been referring to events of the last week when Mr McDowell’s adviser had been passed material relating to the inquiry.

Earlier Mr Ahern’s brother Noel said he suspected someone high up in the Opposition, as he put it, was responsible for the leaks although the Dublin North-West deputy said he had no evidence.

Green Party leader Trevor Sargent has said there now appears to be more trust between Gerry Adams and Ian Paisley than there is between Mr Ahern and Mr McDowell.

He also said Mr McDowell had a responsibility in the national interest to put the information he has in the public domain so the Taoiseach's statement can be assessed against it.

The main political business of the day saw Fine Gael launch its manifesto promising a wide range of taxation and spending proposals including cuts in income tax and stamp duty and extra money for pensioners, and free medical cards for infants.

Mr Kenny also said he would have no compunction about sacking under performing ministers.

He said that of €4.9bn in spending proposals, some €2bn had already been agreed with Labour with the balance due to be negotiated.

The party is promising to cut the standard tax rate by 2%, make radical changes in stamp duty and increase the State pension to €300 a week. Fine Gael is also pledging 2,300 extra acute hospital beds.

The Green Party published a policy calling for a special environmental court and stiffer fines for polluters, while the Labour Party launched their childcare proposals.

The Sinn Féin President, Gerry Adams, has said he is pleased that Mr Ahern is to make a statement about his financial affairs. He was speaking at a news conference in Dublin to showcase the party's 41 candidates. 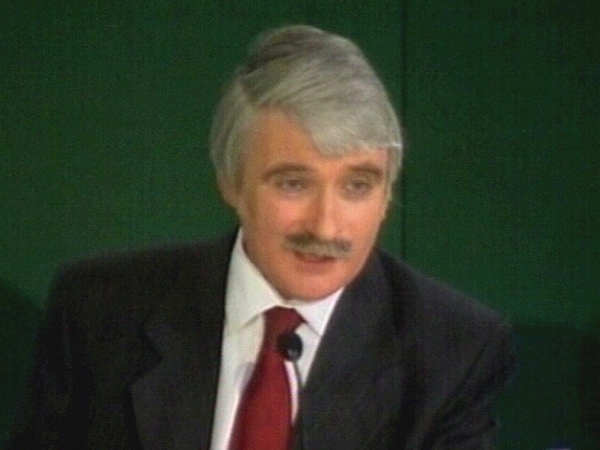