It was supposed to be Fianna Fáil's big campaign launch: a manifesto intended to win the voters.

Journalists at the news conference, like RTÉ Radio presenter Vincent Browne, preferred to focus on questions about the Taoiseach's finances.

'The problem about this money that you got from Micheál Wall is, that it ain't credible that it was for the purpose of the renovation of a house', Mr Browne told the Taoiseach.

Initially, Mr Browne was stopped by a Fianna Fáil representative, at which point he recalled 20 years ago when he claims journalists were obstructed from asking former party leader Charles Haughey questions.

'I hope Fianna Fáil has changed and we won't be obstructed in doing so now', Mr Browne added.

Eventually, Bertie Ahern addressed the issue at hand, one of the first times during this election campaign.

'This has nothing to do with the tribunal', Mr Ahern responded. 'I allocated my money for uses and I'm entitled to do that. I earned the money.'

He added: 'Are you questioning that I shouldn't be allowed to use money?'

'First of all, they were doing a u-turn on stamp duty', commented Mr Rafter. 'And then the Taoiseach was dogged again on the tribunals.'

He added that even though Mr Ahern answered a question, the issues are still hanging over him.

Before the questioning, Fianna Fáil unveiled its election manifesto which included a promise to immediately abolish stamp duty for all first-time buyers.

The party has also promised to increase the mortgage interest relief for first-time buyers and those who have purchased their homes in the last seven years.

Speaking at the launch, Mr Ahern said that Fianna Fáil's proposals for the elimination of stamp duty for first-time buyers will not drive up house prices.

He said that the proposals were targeting the tax system so that money would not be going to sellers.

Mr Ahern said that to follow the proposals put forward by the other parties would create 'a whole load' of distortions in the housing market.

He said that Minister for Finance, Brian Cowen, had always said that Fianna Fáil would not make commitments about stamp duty 'way out' from an election campaign when it would have created instability.

The Fine Gael leader Enda Kenny has described the plan as 'a complete joke' and 'a massive U-turn'.

Speaking at a press conference this morning, Mr Kenny said Fianna Fáil had been in office for ten years and had not acted. He said that as the election is beginning to slip away from the party, it has changed its mind.

On alleged payments to the Taoiseach, Mr Kenny described today's developments as the latest in a series of bizarre comments by Mr Ahern.

Labour leader Pat Rabbitte said that if the campaign gets any worse for Fianna Fáil, the party might propose backdating reform to 1994 and solve some of its other problems.

The party's chairperson, Mary Lou McDonald said that Fianna Fáil was engaging in 'gimmick politics', and that it pointed to the absence of a real housing policy. She said that her party favoured an approach based on tax incentives for first-time buyers.

More than 100 nurses protested at the Mansion House in Dublin at the launch of the Fianna Fáil manifesto, as part of their campaign for a pay rise and shorter working hours.

Stay connected to RTÉ.ie for the latest election headlines and make sure you are registered to vote with the RTÉ Voter Registration Guide. 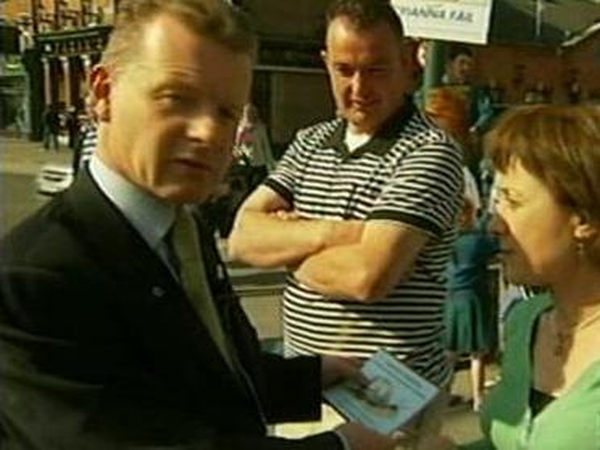