Nurses are set to escalate their industrial action next week, with stoppages in a further 52 hospitals and medical facilities.

However, unions have offered to return to talks without preconditions in a bid to resolve the dispute over pay and working hours.

The General Secretary of the Irish Nurses Organisation, Liam Doran, said that if meaningful talks got underway, the stoppages would be called off.

Meanwhile, the Health Service Executive says the dispute is costing the health services up to €2m a week which may have to be recouped by reducing services and nurses salaries.

HSE Chief Executive Professor Brendan Drumm said that to plug the gap created by the nurses' work to rule, the HSE had been forced to recruit additional agency staff and incur extra overtime.

Prof Drumm said that money would ultimately come from budgets for patient services.

He described as significant the nurses' statement that they were prepared to get into talks without preconditions.

However, he said that if the first issue was the immediate demand for a date for implementation of the 35-hour-week it could represent a false dawn.

Earlier, Mr Doran said nursing unions are willing to enter talks with employers as long as they are meaningful and capable of moving the issues of pay and working conditions forward.

He rejected claims by health service employers that patient care is being compromised by the nurses' dispute.

Work stoppages will take place on Wednesday, 25 April, between 11am and midday at a number of hospitals across the country.

A second series of stoppages will take place between 2.30pm and 3.30pm later that day.

Further action is planned for Friday, 27 April, between 11am and midday. The nurses' work-to-rule will also continue.

Speaking at a joint INO/PNA news conference to announce details of the escalation of their dispute, Liam Doran of the INO said nurses will always respect the National Implementation Body and would respond to an invitation to return to them.

He said he would hope that management would also come with an imaginative approach and an intention to resolve the issues.

Mr Doran added that nurses are coming to the table with more to give than they are looking for, including a willingness to expand their role and save money for the health service.

Mary Conneely of the PNA said it now required a decision by the Government to resolve this dispute.

Nurses have indicated that if by the end of next week they have not reached a point of real engagement with the employers, they will announce the next phase of their campaign and they have stressed they are prepared for a long campaign.

They said that next week's stoppages at over 50 hospitals and mental health facilities will see upwards of 10,000 nurses demonstrating.

Meanwhile, speaking on RTÉ Radio's Morning Ireland, the General Secretary of the PNA, Des Kavanagh, described a claim by the Health Service Executive that nurses' actions had resulted in near misses for patients as 'a scare story'.

Click here for the hospitals affected by the action 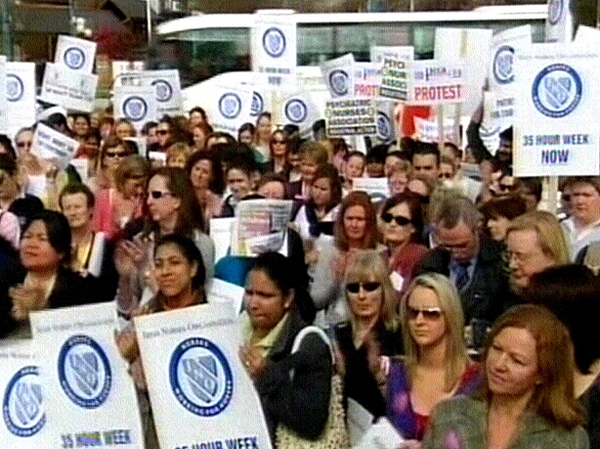