The EU has voiced concern about the political crisis in Ukraine and urged the parties there to work toward a peaceful solution.

The German Presidency called on those with political responsibility in Ukraine to settle their current differences on domestic policy in a manner that complies with the constitution and democratic rules.

A decree dissolving parliament signed by President Viktor Yushchenko yesterday came into force this morning when it was published in the official gazette.

The decree set 27 May as the date for a new election.

It follows months of political stalemate involving the presidency and the legislature, which is dominated by supporters of the pro-Russian Prime Minister, Viktor Yanukovich.

The Kiev parliament last night vowed to defy the order to dissolve the legislature and hold snap elections.

Mr Yanukovich and 53 other members asked the Constitutional Court to rule the decree illegal.

At a stormy cabinet meeting, Defence Minister Anatoly Grytsenko, one of the president's two supporters in the government, said the Ukrainian army would follow his orders.

The rest of the cabinet voted overwhelmingly to support parliament's defiance and Mr Yanukovych asked the president to retract his order for the sake of stability.

Tens of thousands of people were expected to gather in central Kiev to protest against the dissolution order.

In a dramatic televised speech late yesterday after a meeting with parliament leaders, Mr Yushchenko announced the dissolution and ordered the elections to be held on 27 May.

The stand-off reflects deep divisions in Ukraine between the predominantly Russian-speaking industrial east of the country and the Ukrainian-speaking agricultural west. 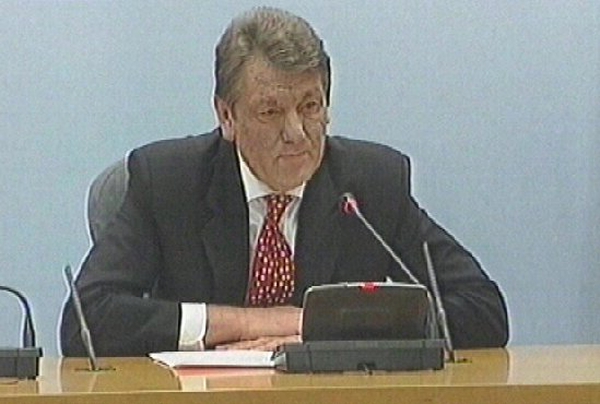