The Minister for Education has said she has the utmost sympathy for students who are trying to fill in their CAO forms but that the CAO would not be extending the deadline on legal advice.

Mary Hanafin said that she was on the site this morning and it was all in working order.

Students have to send their CAO forms today and get a certificate of postage. The deadline for applications is 5.15pm this evening.

Many students have been unable to process their forms online as they were unable to log onto the CAO website.

Speaking on RTÉ Radio's Today with Pat Kenny, Ms Hanafin said the system had proven to be 'extremely slow'.

The CAO has denied that there are any major problems with its system for processing applications online.

Speaking earlier on RTÉ Radio's Morning Ireland, the Operations Manager of the CAO, Joe O'Grady, said it apologised for any delays students may have experienced but there was no need to extend the deadline as most of the applications were in.

Also on RTÉ Radio, Frank Mulvihill, President of the Institute of Guidance Counsellors, criticised the fact that the postal applications must be accompanied by an extra €10 fee.

Mr Mulvihill said the situation had become 'very messy' and the only solution would be to get the minister to extend the application deadline.

Yesterday, for the second day running, students and teachers reported significant difficulties logging onto the site.

Some said it had taken hours to process their applications. 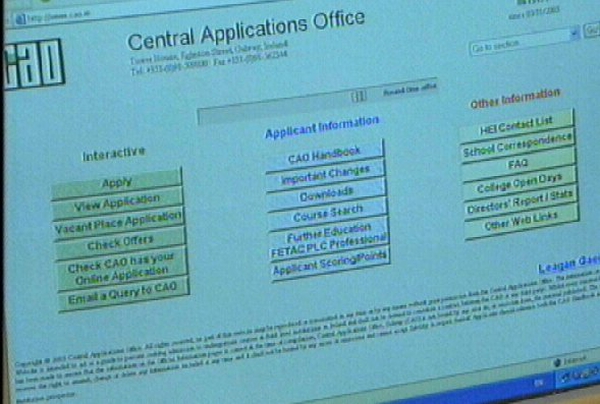