Taoiseach Bertie Ahern has said that Ian Paisley has now provided the clarity that was missing from his statement in the Northern Assembly this morning.

Mr Ahern said the statement was welcome and had removed the doubt that had been raised about the DUP's approach to power sharing.

Mr Paisley indicated his willingness to go forward as First Minister in a power-sharing executive if Sinn Féin met certain conditions and if next year's election results are favourable.

Meanwhile, PSNI Chief Constable Sir Hugh Orde has said that between six and eight devices have been defused at Stormont after loyalist Michael Stone stormed the building earlier today.

The building was evacuated after Mr Stone threw a bag into the main reception area.

Mr Stone previously served a prison sentence for the murder of mourners at Milltown Cemetery in 1988, and has now been detained in connection with today's incident.

The 'suspect devices' are still being examined. The words 'SF/IRA scum' were painted in red on a wall at the front entrance to Stormont.

Northern Secretary Peter Hain said he was deeply disturbed by the events and has ordered an urgent review into the breach of security.

Today's meeting of all the Assembly members was expected to give an indication if there was a realistic prospect of Northern Ireland having a power-sharing administration in place by March of next year.

Before the building was evacuated this morning, Sinn Féin had nominated Martin McGuinness as Deputy First Minister but the DUP did not nominate a First Minister.

Responding to this, the Taoiseach said the Irish and British governments had understood up until late last night that Dr Paisley would indicate that, if his conditions were met, he would accept nomination as First Minister.

He said this had not happened and that, while Dr Paisley had said he was a man of simple words, today he was not.

The Taoiseach said he had spoken to British Prime Minister Tony Blair on the phone. Mr Ahern said he would meet his UK counterpart in the next week, and they would continue to seek progress.

Asked about the two governments' threat to close down the Assembly if clarity was not achieved, Mr Ahern said that would be the easiest thing to do. 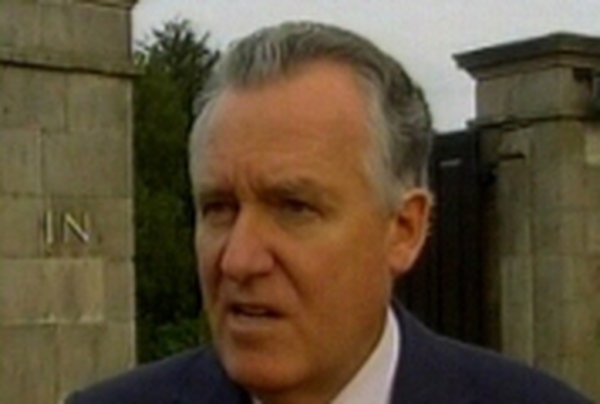