Gerry Adams has dismissed suggestions that Sinn Féin and the DUP could reach any delayed deal on power-sharing which would not have to be implemented until after the November deadline imposed by the Irish and British governments.

Mr Adams said it was still possible to get a deal by that November deadline but he dismissed the idea of reaching any sort of conditional agreement with the DUP under which it could be next year before each side has to meet those requirements.

The Sinn Féin President was speaking following talks with Tony Blair at Chequers, the Prime Minister's country residence in Buckinghamshire.

This afternoon a Downing Street spokesman also dismissed newspaper reports that the two governments were considering any deal which would allow the parties to delay meeting their commitments by the November deadline.

Referring to next week's summit in Scotland, he said: 'We're going for it next week. By this time next week, we will need to know where we are going.'

The North's parties and the two governments are due to attend a summit in Scotland next week to assess the chances of restoring devolution by 24 November.

To succeed Sinn Féin would have to endorse the PSNI and the DUP would have to agree to share power with Sinn Féin. If not, the power-sharing institutions will be closed down.

In another development, the leaders of the four main churches have appealed for progress to be made in next week's talks on Northern Ireland.

The two Archbishops of Armagh, the Presbyterian Moderator and Methodist President issued the appeal at a summit in the Scottish town of Saint Andrews.

They strongly encouraged both governments and local politicians to look beyond what fragments and divides Northern Ireland society, and to concentrate on aspects of the process that would lead towards positive outcomes.

Meanwhile, senior officials from the Department of Finance have been in discussions with their counterparts in Northern Ireland about a financial package that might be provided as part of a deal to restore devolved government.

Yesterday, the Taoiseach, Bertie Ahern, told a conference in Co Antrim that the Government would not be found wanting on the matter of finance if there is the possibility of an agreement on power-sharing.

All parties at talks in Scotland next week will be pushing for money to fund the infrastructure deficit issue in Northern Ireland, with increased domestic rates charges and the introduction of water rates on the cards. 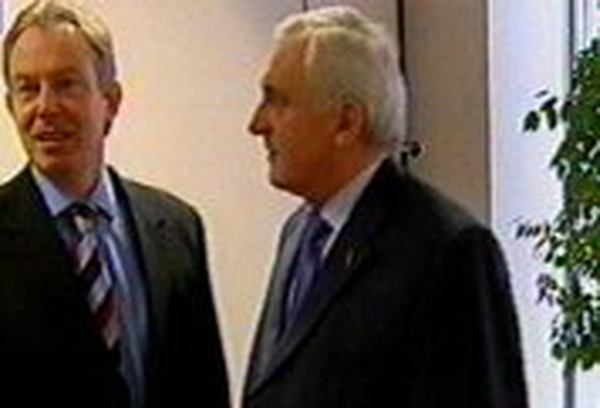