Iraqi police have confirmed that one of Saddam Hussein's chief defence lawyers, Khamis al-Obaidi, has been killed.

Mr Obaidi is the third defence lawyer for the former Iraqi president to be killed since his trial for crimes against humanity opened in October.

The lawyer's body was found near Sadr City, an area that is a stronghold of Shia militias. The body of Saadoun Janabi, the first Saddam Hussein lawyer to be killed, was dumped in the same area.

Mr Obaidi was kidnapped near his house in the insurgent stronghold of Doura, one of the capital's most violent districts.

Iraqi police said his arms had been broken and he had been shot eight times in the head.

His murder has dealt a fresh blow to the US-backed court, which has also been marred by the resignation of the previous chief judge and complaints from the defence and international human rights groups that Iraq's sectarian tension makes a fair trial impossible.

The chief prosecutor in the trial, Jaafar al-Moussawi, has said the murder will 'not affect or delay the trial'.

The killing comes two days after Mr Moussawi demanded a death penalty for Saddam Hussein and three of his former top aides.

They are accused of being responsible for the deaths - following an assassination attempt on Saddam Hussein - of 148 people in the town of Dujail in the 1980s.

The former Iraqi leader has admitted he ordered the Dujail trials that led to executions of members of the long-oppressed Shia majority, but claimed it was his legal right because he was the head of state at a time of war with neighbouring Iran. 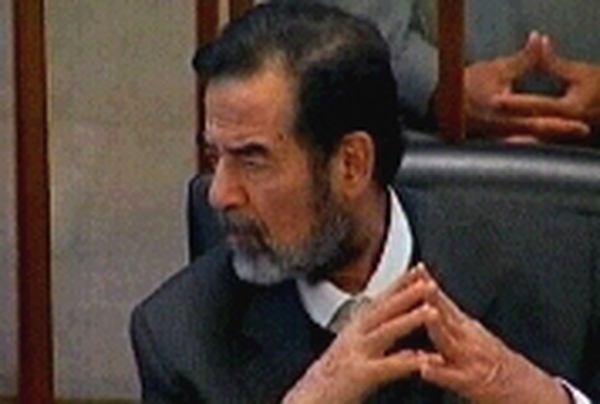