A spokesman for the Minister for Health has said it is unlikely she will be addressing the Irish Nurses Organisation's conference.

It has emerged that the minister will be in the country during the organisation's conference, which begins tomorrow.

A spokesman for Ms Harney had said that the Tánaiste would be out of the country.

The INO had said it was willing to accommodate the Minister tomorrow or on Thursday if she wished to address them.

Speaking this afternoon, the INO's Deputy General Secretary, Dave Hughes, said Ms Harney was welcome to attend the conference whenever it may suit.

Ms Harney will not leave for the US until Friday, meaning she will be here for the first two days of the conference.

A spokesperson for the Minister said she was unavailable to address the conference as requested on Friday afternoon adding that no alternative date was offered by the INO.

The Minister has a number of official duties in Dublin on Thursday including the launch of a Dublin City University project at CityWest.

The Minister of State at her Department, Brian Lenihan, will instead address the conference.

Apart from the controversy surrounding the Minister's non-attendance, the issues of pay and conditions for nurses are expected to dominate the conference which is being held in Co Cavan.

A proposal to hold a national pay rally in June may be decided on when delegates vote on that motion during the three-day conference. 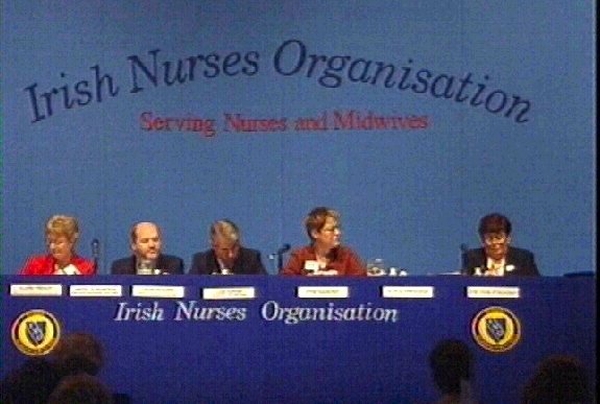