The Taoiseach, Bertie Ahern, presented the US President, George W Bush, with a bowl of shamrock at the traditional St Patrick's Day ceremony in the White House.

In their brief remarks at the shamrock ceremony, both Mr Bush and Mr Ahern referred to the historic links between Ireland and the United States, to the potential for progress in the peace process in Northern Ireland and to the controversial issue of immigration reform.

In his speech, Mr Ahern said he hoped a path may be found to allow undocumented Irish immigrants to regularise their status in the US.

Mr Bush did not respond directly on what is a contentious subject in Washington at present, but he did pointedly note that recent economic growth was now attracting immigration to Ireland.

Following the ceremony, the two men had a half-hour private meeting before attending the annual St Patrick's Day reception, to which the leaders of Northern Ireland's political parties were invited.

Also there were the McCartney sisters and the family of murdered Dublin man Joseph Rafferty, who claim Joseph’s killer was a member of the IRA.

During his speech last night, Mr Ahern said that the Irish and British governments would make difficult decisions, if needed, to move the peace process forward in Northern Ireland.

He further called on all Northern parties to participate in policing, and said there needed to be a 'new beginning' for working class loyalist communities.

Mr Ahern told his audience that while there has been real progress, particularly with the end of the IRA campaign, more work was now needed. 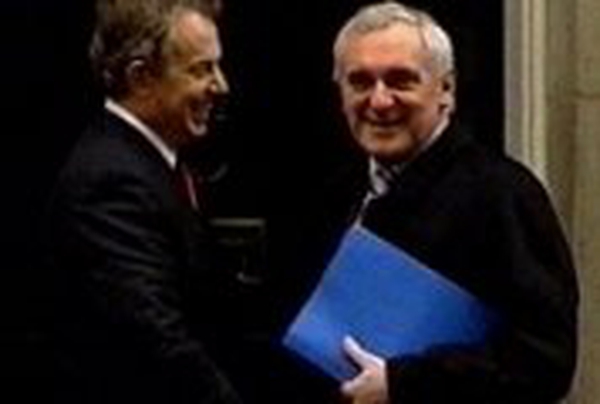