The Minister for Foreign Affairs, Dermot Ahern, held what he described as 'robust discussions' with DUP leader Ian Paisley today over remarks made about President McAleese at the weekend.

Mr Ahern said he told Dr Paisley that on behalf of the Government and the Irish people, he found the criticisms of the president unacceptable, unwarranted and untrue.

He said no member of the Irish Government would do likewise with any head of state, not least the Queen of England.

Mr Hain added that he personally is a great admirer of the president, and that that speaks for itself.

Mr Paisley has so far refused to apologise for the comments, which he made at his party's conference over the weekend.

Mr Paisley said that when President McAleese had made comments regarding Unionists and Nazis the Irish Government had been strangely silent.

He said that he had spoken the truth at the weekend and the Irish Government was going to have to take it.

Mr Paisley also said that Sinn Féin should not be involved in negotiations with the two governments while criminality is ongoing.

Hain hopeful of progress at talks

Earlier, Mr Hain said he was confident that a way forward could be found at talks at Hillsborough in Co Down today.

The discussions, involving Northern Ireland's political parties and the Irish and British governments, are exploring ways of restoring a power-sharing assembly at Stormont.

Mr Hain said all the parties had put forward proposals and all sides accepted that the current state of political paralysis was simply not sustainable.

The Assembly has been closed since autumn 2002. 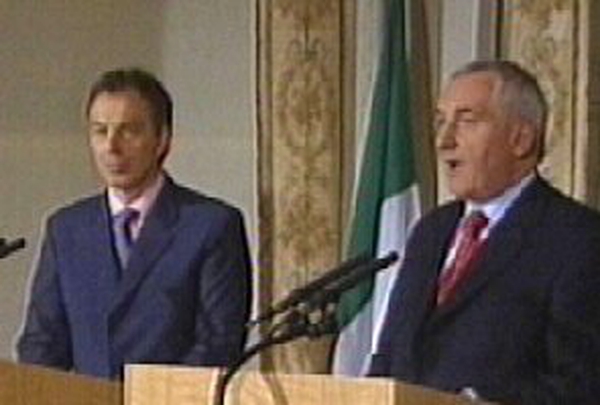 Ahern & Blair to meet on Thursday