Irish Ferries has initiated informal contact with crew representatives over the dispute with has halted sailings on the Irish Sea.

The Executive Council of Congress will hold a special meeting to discuss the dispute on 29 November.

The Executive Council decided to arrange the meeting on foot of a motion from SIPTU President Jack O'Connor calling on Congress to organise a national day of protest against the actions of the company. SIPTU said it would not rule out the possibility of blockading ports.

Congress General Secretary David Begg said he deplored the actions of the company, which not only violated every precept of normal industrial relations conduct, but which could also have put the lives of crew or passengers at risk.

'To date this company has proved utterly contemptuous of all norms of decency. They have refused to engage with representative and democratic bodies, they have refused advice from the body politic and they have scorned public opinion,' he said.

Earlier, the Taoiseach launched a strong attack on the tactics of Irish Ferries management, describing them as anathema to everything he has worked for for more than 20 years.

The controversy over the replacement of union members with cheaper agency staff has resulted in ships' officers on the Isle of Inismore ferry, moored at Pembroke, barricading themselves into the engine room.

Bertie Ahern, speaking during a visit to Budapest, also defended his remarks earlier in the week when he said the Government was powerless to intervene in the dispute.

Some had claimed the remarks had given Irish Ferries the green light to take the action they did.

The Taoiseach insisted that when he had made the remarks he had known from union sources that the company was about to send in security men and a Latvian workforce.

SIPTU’s Regional Secretary for Dublin, Patricia King, told RTÉ News that Irish Ferries was on a 'mission of thuggery' following its decision to put extra security personnel in place yesterday as agency staff were being brought on for training.

One of the officers on the Isle of Inishmore said he and three other colleagues would remain there until the company abided by Labour Court recommendations.

Alf McGrath, Director of Human Resources at Irish Ferries, said the ships' officers still believed they were working for a semi-State company and could get extra money whenever they wanted.

IBEC, the business and employers' body, said yesterday's events on Irish Ferries ships were 'not normal in Irish industrial relations'.

The confederation said, however, that it believed the dispute was unique to the shipping industry and had no direct relevance to companies operating in this jurisdiction.

It said Irish employers were governed by a substantial body of protective legislation and the second highest minimum wage in the EU. The extension of an Irish Ferries model into the broader economy was neither desirable nor practical, it said.

Welsh police have been monitoring the situation on the Isle of Inishmore and another ship, Ulysses, which is docked at Holyhead.

The decision to press ahead with outsourcing was largely expected. But unions are furious at the manner in which the company has chosen to execute its plan.

The Seamen's Union of Ireland, which had supported the redundancy plan for its members, has said it is appalled by the company's tactics.

SIPTU argued that laws could be changed to protect Irish jobs and prevent the exploitation of foreign workers. 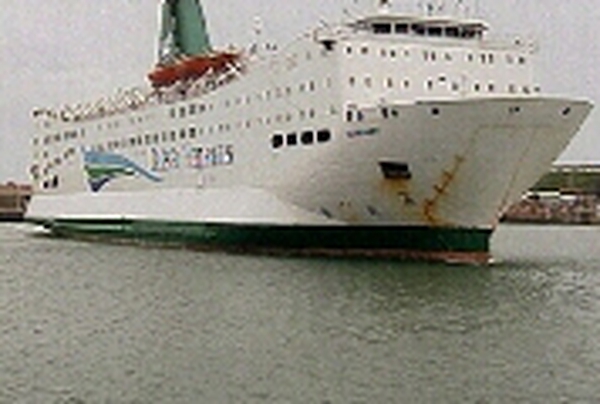