Russian President Vladimir Putin has vowed to crack down on insurgents after his forces killed scores of Chechen guerrillas and local Islamic supporters in Nalchik.

Mr Putin said his forces acted 'coherently, effectively, toughly' in the southern Russian town after gunmen attacked the town in the Caucasus.

'Our actions must be commensurate with all the threats that bandits pose for our country. We will will act as toughly and consistently as we did on this occasion,' Mr Putin said on Russian television.

Russia's Interior Ministry said that up to 100 people were killed in shoot-outs in Nalchik. The ministry said the dead included 70 of the guerrillas.

TV pictures showed special forces troops, backed up by an armoured personnel carrier, firing through the window of a souvenir shop. Moments later, they stormed the shop and dragged out a woman hostage who appeared to be unconscious.

It was also reported that Russian forces freed five hostages held by rebels at a police station overnight.

Up to 1,500 troops, as well as 500 special forces, were sent to the city, which is located in the Russian republic of Kabardino-Balkaria near Chechnya.

Yesterday, President Putin ordered Russian forces to cordon off the area and kill any gunmen who put up resistance.

Rebels from nearby Chechnya and local Islamic militants opened fire on a number of government buildings in the town yesterday. 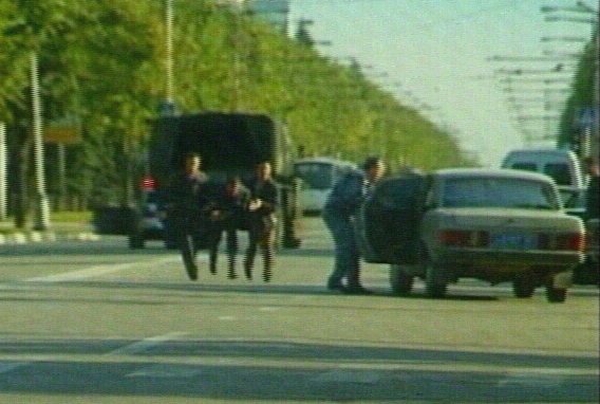