President Mary McAleese has this evening clarified remarks made in an interview yesterday which were seen by the Orange Order as a slur on the Protestant community of Northern Ireland.

On RTÉ Radio, Mrs McAleese acknowledged that she had been clumsy in trying to make the point that people should try to end the legacy of sectarianism on both sides.

She said she was devastated by the response to her remarks and expressed regret for not fully explaining herself. She added that she was deeply sorry for the hurt caused.

The President made the comments before attending the Auschwitz remembrance ceremonies in Poland.

Earlier today, the Orange Order announced it had cancelled official talks with Mrs McAleese in Dublin, in protest at what it described as the President's grossly offensive slur against the Protestant people of the North.

Senior members of the order had accepted an invitation to Áras an Uachtaráin in March as part of President McAleese’s attempts at building bridges with Protestants.

Meanwhile, a spokesperson for the President said she was responding to a question about intolerance and the damage it could cause.

A statement noted that Mrs McAleese went on to quote several examples of how intolerance and hatred could be transmitted to children, and the massive implications this could have for people and society into the future.

'The President's record of equal and sincere support of both communities in Northern Ireland is well documented, and her private guest list to her recent inauguration ceremony is one example of that equal support,' the statement went on.

Ian Paisley Jnr of the DUP expressed anger to her comments as did the Ulster Unionist MLA, Michael McGimpsey.

He said her comments were wrong and deeply insulting. To make such a comparison, he said, was outrageous and possibly displayed deep-seated sectarianism on the part of the President.

Speaking in Cork this afternoon, Mr Ahern said it would be inappropriate for him to comment on the President's remarks directly.

However, he said the Government is enormously supportive and appreciative of the work done by Mrs McAleese on building and promoting reconciliation in the North.

The Jewish community was upset she did not take the opportunity to apologise for then Taoiseach Eamon de Valera's condolences to Germany on the death of Hitler. 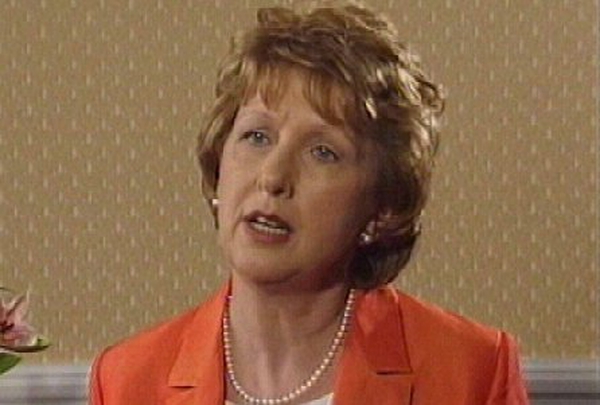 McAleese prays for reconciliation in NI