Palestinian Foreign Minister Nabil Sha'ath has told a news conference in Paris that President Yasser Arafat is very ill, but his heart, lungs and brain are still working.

He said doctors had ruled out both cancer and poisoning as causes of the 75-year-old's illness, but were not in a position to give a firm diagnosis.

Efforts are still being made by his French doctors to stop cranial haemorrhaging as the leader lies in a coma.

Earlier, the former Palestinian Prime Minister, Mahmoud Abbas, had said that the condition of Mr Arafat was ‘very serious’ after visiting him in hospital in Paris.

Mr Abbas, who is the second in command in the Palestinian Liberation Organisation, spent two and a half hours visiting Mr Arafat with Palestinian Prime Minister Ahmed Qurei and with Mr Sha'ath.

Palestinian Cabinet Minister Saeb Erekat told a crowded news conference in Ramallah this afternoon that Mr Arafat's condition was 'very serious', but he was still alive.

Mr Arafat was earlier said to be in a deep coma and it was reported this morning that his condition had worsened overnight.

His wife, Suha, had objected to the visit of the officials, claiming they were conspiring against her husband.

The officials' trip was earlier cancelled after an angry outburst by Mrs Arafat on Al Jazeera television. She accused the Palestinian leadership of a plot to bury her husband while he was still alive.

The French Foreign Minister, Michel Barnier, had increased the pressure on her to allow the visit to go ahead and to lift the veil of secrecy she had imposed on the state of her husband's health.

There has been no official announcement of the cause of Mr Arafat's illness since he was brought to France 11 days ago. 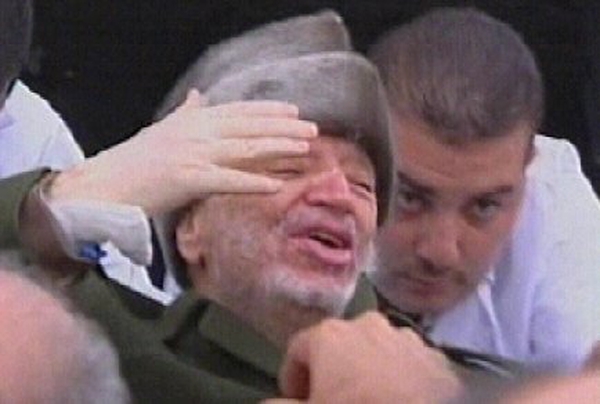 Confusion over health of Arafat