The members of the new Cabinet have received their seals of office from President Mary McAleese at Áras an Uachtaráin tonight. This was followed by a private meeting at the Áras.

The Taoiseach, Bertie Ahern, announced his new Cabinet in the Dáil today. Mr Ahern opened his statement in the Dáil by announcing that Michael Smith had resigned as Minister for Defence.

He went on to pay a generous tribute to the outgoing Minister for Finance, Charlie McCreevy, and to the Minister for Agriculture, Joe Walsh, who announced his resignation some time ago.

The Tánaiste, Mary Harney, has taken the health portfolio while Brian Cowen moves to finance. The new Foreign Affairs Minister is Dermot Ahern while Michéal Martin moves to the Department of Enterprise, Trade, & Employment.

Mary Coughlan becomes the first woman to hold the agriculture portfolio, while Noel Dempsey moves to the Communications Department.

Martin Cullen takes the challenging transport portfolio where he will have to deal with Aer Rianta and CIÉ and Séamus Brennan is to take up the Social & Family Affairs portfolio.

Mr Ahern has also announced that Minister of State Jim McDaid had resigned.

Only three ministers remain in their existing portfoilos. Michael McDowell remains in the Justice Department. Éamon Ó Cuív stays in Community, Rural and Gaeltacht Affairs, and John O'Donoghue in Arts, Sport and Tourism.

Reacting to the Taoiseach’s statement, the Fine Gael leader told the Dáil that the reshuffle does not amount to a new Government.

Enda Kenny accused the Taoiseach of trying a confidence trick on the electorate, adding that the new ministers were as guilty of the Government's failings as their predecessors were.

Mr Kenny said that the public had learned that Mr Ahern would do anything to achieve a third term in office, and as a result he had lost their trust.

Labour Leader Pat Rabbitte told the Dáil that the only hard decision taken by the Taoiseach was what he described as the 'exile' of Charlie McCreevy to Brussels.

He also suggested that the decision to appoint the Tánaiste as Minister for Health was designed to allow Fianna Fáil to blame the PDs for problems in the health service. 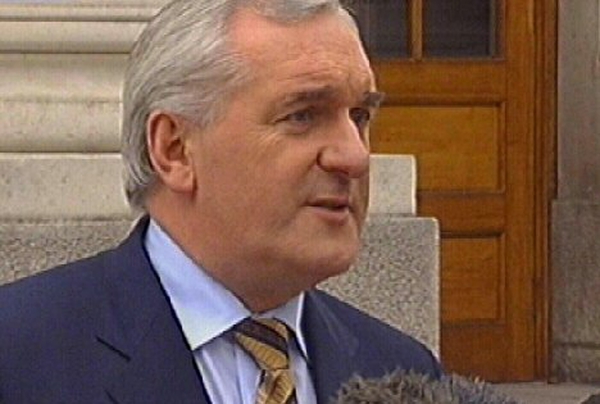