Go Outside and Play is back this summer for a brand-new series, Famous Locations, and this time Carl Mullan isn’t alone. With a summer of exciting staycation ideas ahead of us, we are thrilled to introduce Carl’s new co-presenter, Karl Doyle!

Born with arthrofibrosis, which led to osteoporosis and scoliosis, Karl has been using a wheelchair for all of his life. His need for accessible routes (along with his cracking sense of humour) will bring a whole new element to the travel show as the two navigate travelling around the country's most scenic spots.

These famous locations are home to the big and small screen and ideal to get the perfect Instagram snap. This series is not to be missed ahead of planning some day trips or staycations around Ireland this summer.

Having searched for FREEEDOOOOM!! in the Wicklow mountains, Carl and Karl head north to hunt for dragons and claim their place on the iron throne.

Northern Ireland has become hugely popular with visitors ever since the cast and crew of Game of Thrones descended there for filming. It was the biggest series ever shot on the island and one location, the Dark Hedges, has become one of the most Instagrammed locations going.

In today's episode of GOAP, we see the presenters take on an eventful pre-dawn adventure to visit some of the iconic sights.

Donning a "Jon snow cape", Karl guides Carl through the Dark Hedges - a famous GoT location that was actually only used once in the show as the King's Road.

From there, the duo head to Musseden Temple in Coleraine in Derry which was transformed into Dragonstone, home of Stannis Baratheon.

Next, the two hosts take a scenic road trip to Bushmills in Antrim to visit Dunluce Castle which, with a little TV magic, became Pyke Castle of House of Greyjoy. 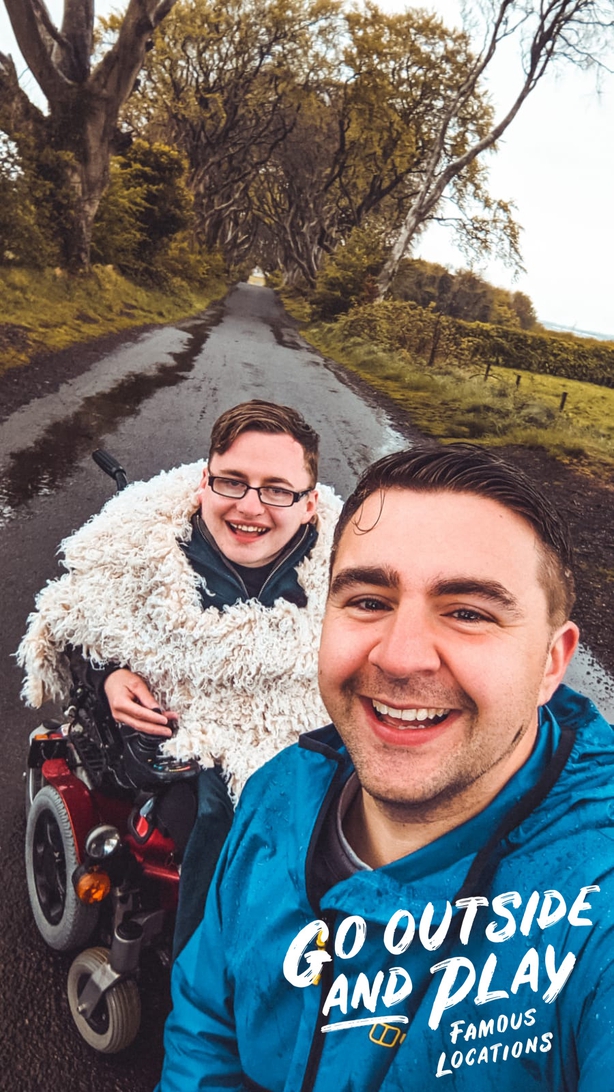 Famous connection?
Thanks to its cinemantic beauty, historic castles and rugged coast lines, Northern Ireland was the perfect setting for the epic story of Game of Thrones.

How to make a day of it
With eight seasons to its name, the popular fantasy drama clocked a lot of hours on location, with about 25 locations filmed in Northern Ireland alone including Musseden Temple, Ballintoy Harbour, Castle Ward, Inch Abbey and Downhill Strand.

There are plenty of private and group tours available that will bring you on a concise tour of some of the show's most iconic locations (ring ahead to check accessibility options). However, if you want to go it alone, here are a few ideas for a GoT-themed weekend away:

1 in 7 people in Ireland have a disability that prohibits them from participating fully in the outdoors. RTÉ Player's Go Outside and Play is proudly sponsored by Rockshore.