Nestled along the scenic coastline of the Wild Atlantic Way lies a magical city brimming with colour, culture and tradition. Galway, often referred to as the ‘City of the Tribes’, has a history as vibrant as its rainbow-hued houses, and is home to the largest Irish-speaking community in Ireland.

The county boasts 35 heritage sites, 31 museums and 10 art galleries, and is the birthplace of the symbolic Claddagh ring, as well as the traditional fishing boats known as the Galway hookers. It’s also the festival capital of Ireland, hosting over 100 festivals and events per year, including the Galway International Arts Festival, Galway Comedy Festival and the Galway Food Festival. 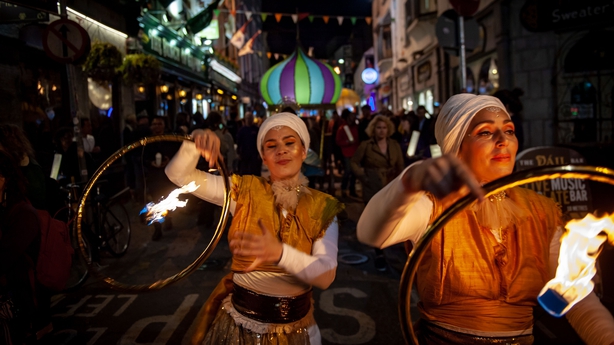 The city’s newly-achieved status as European Capital of Culture 2020 really says it all. From foodies to film buffs, oyster guzzlers to literature lovers, and art fiends to music fans, it’s a bustling hive of activity that caters to everyone.

A year-long programme of extraordinary events will showcase the artistic richness, creative ingenuity and cultural diversity throughout the year. It is a celebration of not only Galway City, but of its islands, country, language and, most importantly, its people.

The Latin Quarter
The Latin Quarter is known for its cobbled stone streets, boutique shops and quaint restaurants, and is only a short amble from the famously fast-flowing River Corrib.

Defined by some of Galway's most historic landmarks, like the Spanish Arch, this is where Galway really comes to life. Fancy some window shopping, or perhaps an afternoon tipple in a quirky bar?

This is the perfect spot. Magpies and bookworms, keep your eyes peeled for hidden gems at Tempo Antiques or the characterful Charlie Byrne’s Bookshop.

Galway Market
If you’re looking for somewhere to heighten your senses and peruse a range of fresh, local produce, then Galway market is the place to go.

The market, situated next to St Nicholas’ Collegiate Church, is brimming with friendly local traders, as well as handmade arts and crafts stalls. Enjoy the sights and the smells of baked bread, freshly ground coffee or, if you’re up for it, the enjoyable pong of Sheridans Cheesemongers.

It’s almost impossible to leave without indulging in some famed Galway Bay oysters, or even bagging a jar of Cobie’s homemade jam – what a treat!

It’s said that Christopher Columbus worshipped here during his visit to Galway in 1477 – an experience he documented in the margin of his copy of Imago Mundi.

The church’s unusual structure derives from its captivating history – it dates all the way back to 1320 – and there are also some fascinating monuments and memorials dotted throughout, including that of Jane Eyre.

Where to eat and drink

The King’s Head
A vibrant, medieval pub in the centre of Galway, The King’s Head is a prime location for either an extended, hearty lunch or a swift half of the local ‘Blood Red Ale’*.

Steeped in rich and riveting history, this grand establishment is one of the oldest pubs in Galway and provides a strong variety of entertainment, including live music, comedy and sport, or ceol agus craic, as the locals might say.

If you’re lucky, you might even be able to commandeer a chair by the fireplace, built in 1612. Some say it’s the best seat in the house – I’d have to agree!

Pullman Restaurant
The Pullman Restaurant at the Glenlo Abbey Hotel & Estate delivers an unforgettably unique dining experience. Dine aboard a beautifully restored train carriage enriched with history and dripping in elegance, one of two original carriages from the Orient Express, which make up the restaurant.

Make yourself comfortable in either a private booth or a window seat, and marvel at the spectacular views of the estate. The majority of herbs and wild foods used in dishes are grown in the gardens of Glenlo Abbey Hotel or foraged in the local area. I can assure you this is one train you’ll never want to get off. (Three-course menu from €69 and a bottle of wine from €29.50.)

Tartare
Café by day and an organic wine bar at night, Tartare caters for culinary enthusiasts and casual coffee drinkers alike, and is arguably one of the hottest brunch spots in Galway.

Headed up by the inspiring husband-and-wife team, Jp McMahon and Drigín Gaffey, Tartare was awarded a Bib Gourmand from the MICHELIN Guide in 2018.

Their philosophy is admirable and their bao buns are to die for. Not only are they environmentally aware (using only small, local and ethical suppliers), they also present an adventurous menu of mouth-watering meals using the very best Irish ingredients. (Sharing boards from €16.50 and a bottle of wine from €27).

Glenlo Abbey Hotel & Estate
If you’re looking for an idyllic, relaxing spot to stay in a convenient proximity to the vibrant buzz of Galway city, there’s no better choice than the luxurious Glenlo Abbey Hotel.

Sitting elegantly on a beautiful 138-acre estate, on the waters of Lough Corrib, the hotel is a cosy, countryside paradise and offers a range of activities including falconry, golf, whiskey tasting and fishing.

It also provides a choice of interesting local tours and walks of the surrounding area. If, however, you’d just like to unwind, opt for a drink in their rustic Oak Cellar Bar, dine at their award-winning Pullman Restaurant or enjoy a film in the hotel’s very own Abbey Movie Theatre. Doubles from €96.

Where to get your culture fix

Druid Theatre
The Druid theatre, founded in 1975 by Garry Hynes, Marie Mullen and Mick Lally, was the first professional Irish theatre company outside of Dublin.

They put on a range of riveting productions throughout the year, one of the more recent being The Cherry Orchard. Tom Murphy takes on Chekhov’s masterpiece – a faultless amalgamation of the great Russian classic. The Cherry Orchard runs from February 22 until March 7. Tickets from €28.

Take a step back in time and enjoy the delights of an open turf fire with a hot pot of tea and delicious scones. Make sure you don’t miss the design studio at the rear end of the cottage, where you’ll discover an impressive array of Ireland’s best contemporary and vintage interior home accessories, and a selection of Irish gifts.

Tours can be purchased from €5 per person.

Connemara
A few miles down the road, you’ll be greeted by the beautiful, rugged landscape of Connemara. Where rivers cut gracefully through valleys and hills disappear into the ever-changing clouds, this is one of the most spectacular destinations along the Wild Atlantic Way.

The views of the harsh, characterful terrain are simply breathtaking. This vast expanse is also the location for the Kari Kola lighting installation by Loch Na Fooey, which translates as ‘Lake of the Winnowing Winds’. Consisting of around 1,000 light fixtures across an area 6km wide, this dazzling display will be one of the largest illuminated artworks ever attempted, and will run from March 14-17.

The project is free to attend and will be known as ‘Savage Beauty’, a nod to Oscar Wilde’s description of Connemara – a perfect name for such a remarkable setting.

How to plan your trip
The programme of events for Galway 2020 is available at galway2020.ie/en/programme.