Kia's new generation of electric cars starts with the EV 6 - due in Ireland later this year - and a claimed range of 510 kilometres.

I have yet to drive an electric car that can live up to its claimed range in everyday driving conditions. Most electric cars are perfectly adequate in city stop/start environments but once you get onto a motorway or increase demand on the battery - by using air conditioning, the heater, radio, demister or other functions - you can see the gap widening almost dramatically between the range available and the battery consumption.

Some manufacturers are better than others in matching their claimed mileage with real world conditions but even the best of them tend to fall short. Kia has been one of the better ones in terms of the range match, so news of its new generation of electric vehicles with high ranges is worth noting. Even allowing for an average 20 per cent drop in range, we're still looking at a potential range of over 400 kilometres. 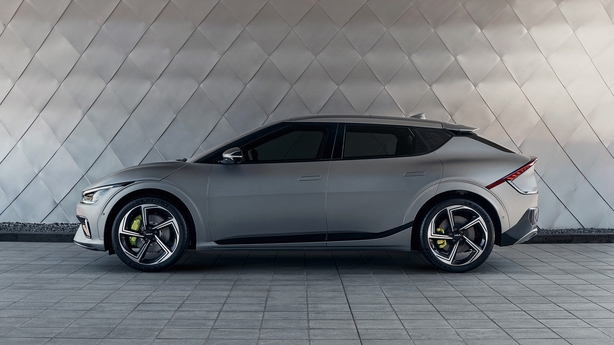 The EV 6, which arrives in Ireland, towards the end of the year is priced at €50,000, including grants. Built on a dedicated battery electric platform, the car benefits from much better spacial dimensions than would be the case with a conventional car. With no transmission tunnel it has 900 mm more legroom than others cars of this size, for example, and the boot is a capable 520 litres and extends significantly with the seats down.

It looks sharp in its design and will certainly pose a challenge for more expensive electric cars, such as those from Jaguar and Tesla. Two versions will be coming here, with an entry level one called "Earth" and a GT line. They will have 77 kWh batteries, which can be replenished on a fast charger from 10% to 80 % capacity in 18 minutes, according to Kia. Charging a standard public network charger will take significantly longer. 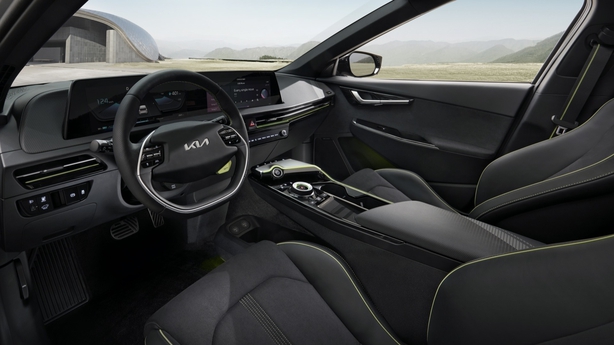 The interior is dominated by two 12.3" screens - one for instruments and one for infotainment - and there is also a built-in charging pad for a 'phone.

Output is 222 horse power for both. The GT version will get extras such as bigger wheels and sport trim.