A University College Dublin/Toyota study has found that hybrid cars do not use petrol for an average of 40 percent of distance travelled.

The new study - the first major one in Ireland to determine how long hybrid cars run purely on electricity during average journeys - has found that they run without petrol for 40 percent of the distance travelled. This figure drops with longer distance motoring, however.

The study was undertaken by a team from UCD and was funded by Toyota, which provided seven drivers from the university’s consultancy service with Prius cars for a week last November. It involved some 2,000 kilometres of driving between UCD and six locations. Routes included motorway driving, secondary roads and city driving and were described as being typical of Irish commuting journeys. 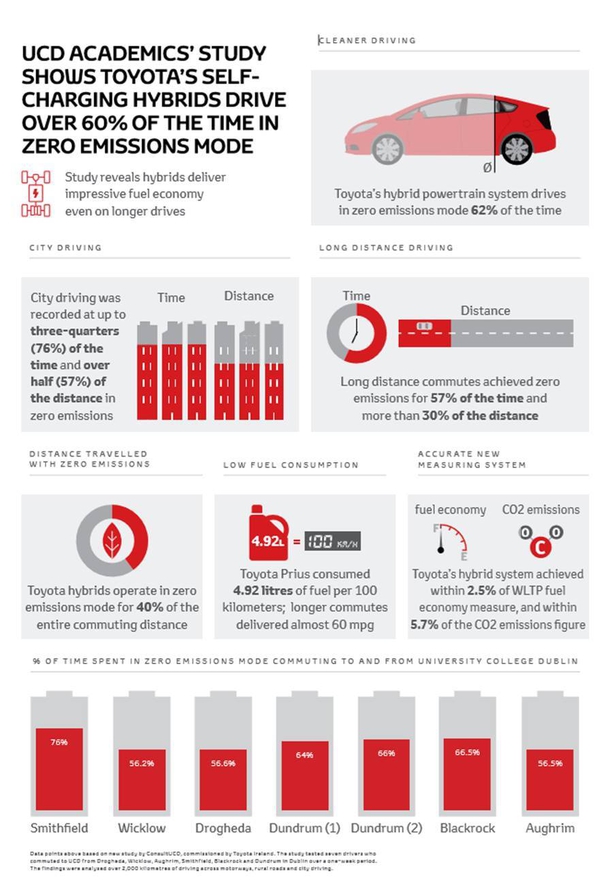 The locations were Drogheda, Wicklow, Aughrim, County Wicklow and Smithfield, Blackrock and Dundrum in Dublin. The commutes were in addition to normally scheduled activities such as school runs, shopping and so on.

The results show that in the case of the long-distance commuters the cars were driven in zero emissions mode (ZEV) for over 50% of the time but were lower, in terms of the distance covered, at 30%. Zero emissions mode is described as "the time the engine is not running and the vehicle is, therefore, emitting no pollutants." This obviously includes periods when the car is stationary in traffic.

During city centre commuting, the cars were in ZEV over 75% of the time and for over 50% of the distance.

The three drivers with the longest commutes had the best fuel economy, averaging 4.7 litres of petrol per 100 kilometres, or almost 60 mpg.

While long distances meant greater fuel economy, shorter journeys meant less fuel economy. While the lower figure for the longer commute was 4.7 litres, two of the average city consumption figures were 5.3 and 5.4 litres per 100 kilometres of driving, or 53 and 52.3 miles per gallon respectively.

The commuters from Drogheda, Aughrim and Wicklow town to UCD spent over half (56%) of their time in zero emissions mode over the respective 644 km, 452 Km and 293 Km driven over the course of the week’s testing.

The study also revealed that, on average, fuel consumption for the Prius was 4.92 litres per 100 kilometres (57 mpg) and average C02 emissions were 114.2 grammes per kilometre. The figures are closely aligned to the new and more strict world harmonised consumption figures recently introduced.

The researchers were given "guidance" on optimising hybrid driving but were otherwise free to choose their own routes and driving styles. Interestingly, the study was carried out in November  - a time of year when batteries have heavier burdens because of extra heating and other draws.

Hybrid cars are not incentivised by the State in the same way as electric cars as they still have petrol or diesel engines. In other words, conventional combustion engines.

However, Toyota’s Corporate Affairs Director, Mark Teevan, said self-charging hybrids had a significant role to play in decarbonising the Irish car fleet. He said hybrids did not have the disadvantages currently faced by electric cars.

"The study underlines the fuel economy and positive environmental impact that self-charging hybrids can bring to society with reduced C02 and improved air quality, which, in turn, can deliver significant health benefits for cyclists and pedestrians traveling the same routes", he added.