At 61, actor, presenter and musician Martin Kemp has been in a hit band, starred in movies, reality TV, a top soap and documentaries. But for him, the 80s remains the highlight decade.

And he’s now far enough removed from New Romantics band Spandau Ballet to feel able to write Ticket To The World: My 80s Story – about how the group came about, the spats, the hits (To Cut A Long Story Short, True, Gold…), the competition and, most of all, the fun of the era.

His brother Gary, singer-songwriter and lead guitarist with Spandau, hasn’t yet read the book, but Kemp chuckles that he can go out and buy one. "He can afford it."

The siblings remain close and are in regular contact, he adds, despite all the ups and downs of the band. Family comes before everything.

"For a long time, I always felt that it was Gary’s band. He was writing the songs, he was moulding it into what he wanted. That’s not taking away from my brother at all because he was absolutely brilliant." 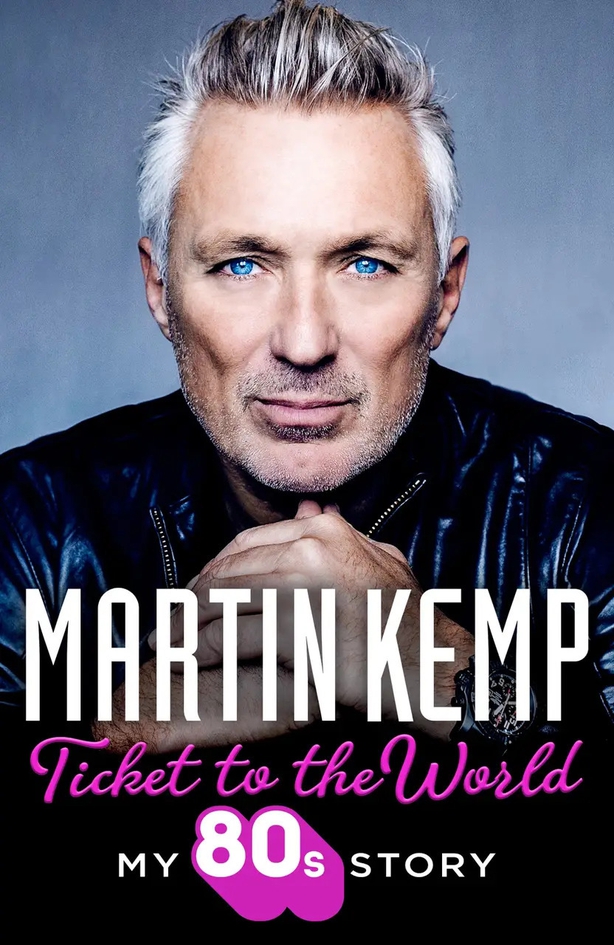 Kemp, who plays bass guitar, continues: "We all knew what part we had to play, but I always felt my part was probably smaller in a way than everyone else’s. I always felt that the only reason I was there was to be on the front cover of a magazine.

"I’m not sure that’s the most fulfilling thing to have, even when you’re an 18-year-old boy. But what I didn’t know was that it was an incredible ride and everything I dreamed of doing."

Time has helped him see his Eighties experiences in a new light, he reflects.

"I read somewhere that every seven years, you replace every cell in your body, so every seven years you become someone completely different. That makes me about six times removed from the kid that I was that signed that first record deal. I can look back and see what’s right and wrong with it. As well as the rush and the incredible journey we went on, I can see it for what it was."

In Spandau's heyday, the band would be mobbed by screaming fans wherever they went and pursued by paparazzi.

"We would do the shows, escape out the back of the gig in an ambulance huddled together. When you are 18 and 19, with thousands of kids banging on the windows, you are laughing at those moments. It was happening to a bunch of school friends."

He still keeps a few costumes from those heady days. "One’s a classic – it’s made up of 12 pieces that to this day, I do not know how to put it on." Other pieces don’t fit him anymore, he says, laughing.

As with so many bands, there were tensions. The buck stopped with Gary, which didn’t always go down well. Sometimes it came to blows between the brothers, he adds, chuckling.

"Gary and I were like the pressure cooker, the release valve. When pressure in the band built up, Gary and I would go off and argue. Our arguments would sometimes turn into fights, but we were brothers, we knew that our love went beyond the fight and we would get it out of our systems.

"If there were problems in the band, I could talk about it to Gary, whereas the other guys couldn’t because it would probably mean an end to the band."

Spandau split in 1990. "The last album was very difficult, the tensions were difficult, we’d been together too long. It was one album too many," Kemp reflects. They reunited in 2009, but lead singer Tony Hadley left in 2017 and it’s a subject Kemp doesn’t want to discuss today.

It must seem like an age away from his life now, as we see him josh with his radio presenter son Roman on Celebrity Gogglebox and Martin & Roman’s Weekend Best.

While he says the music scene today is healthy, there are aspects that don’t live up to their Eighties predecessors.

"What they don’t have now that we had back then is a pop culture, where kids are trying to shock their parents. Pop culture has become what happens behind a laptop. That’s really sad. We as kids used to have to go out there, buy records of the tribe we belonged to – that was our flag. On the internet, to me, it doesn’t seem to be as social, even though we call it social networking."

Unlike so many of his music contemporaries, Kemp never descended into drug addiction and has enjoyed a marriage that has lasted.

"We were primarily a drinking band, working-class kids who were looking after one another all the time. The drug of choice for our band was alcohol."

He married Shirlie Holliman in 1988, after becoming infatuated seeing her on Top Of The Pops when she was a backing singer for Wham! He recalls that George Michael, who became one of his closest friends and was Roman’s godfather, was her chaperone on their first date.

Were the couple ever tempted to stray when they were on the road?

They renewed their vows to celebrate their 25th wedding anniversary on the Caribbean island of St Lucia, where they first married.

"We’ve never been a couple to count the years or to even mark them," Kemp says. "Anniversaries come and go, we don’t worry about it. They are not the important things. The important thing is looking after each other while you are with each other."

After the band split, he and Gary enjoyed success in the hit movie The Krays in 1990. But in 1995, he was diagnosed with two brain tumours after discovering a lump on the back of his head, and over the next three years had treatment to remove them.

In 1998, still not totally recovered, he jumped at the chance to play Steve Owen on EastEnders, aware that his prolonged health battle had stopped him from working.

"Looking back, I will always appreciate the gig with EastEnders because it took me out of that part of my life that was all about a brain tumour. When I joined EastEnders, I was struggling to remember lines. Sometimes if I needed to walk left, I would walk right. There was stuff I was keeping to myself. My brain was still repairing itself."

He says his family was deeply affected by his brush with death.

"Shirley, my mum, and dad, and my brother were at home every day waiting for a phone call that I’d passed away. I could feel that with them for years afterward. Because I was in the middle of it, on every drug possible coming into me, you fight to get to the other side."

He says there are no lasting health problems, but he does look after himself.

The wider Kemp family have also collaborated in work. In 2019, he and Shirlie recorded an album together which featured their daughter, Harley, and in 2020 they wrote a book about their relationship. Family has kept Kemp grounded, he agrees.

"At the end of the day, that’s the most important thing," he says. "I would happily walk away from a career to keep my family together."

Ticket To The World: My 80s Story by Martin Kemp is published by HarperCollins. Available now.