Following her retirement from racing, jockey Nina Carberry found herself in limbo. She tells Donal O'Donoghue how Dancing With The Stars changed everything and why motherhood means so much to her.

"Dancing With The Stars opened up new opportunities for me, but it also opened up another side to me." Nina Carberry, the former champion jockey who has forged a new career as a TV star sips her green tea and reels in recent times. From winning DWTS last March to emerging as the new coach on Ireland's Fittest Family, the 38-year-old has found a niche while also revealing new facets of her public persona.

"I realised that life was not all about horses," she adds (she still has her own business, Nina Carberry Racing). "I also found my shouting voice," she says of the imminent TV series which pits her against fellow coaches Davy Fitz, Donncha O’Callaghan and Anna Geary. "I thought that I was going to be the quiet one but I definitely wasn’t." Following her retirement from racing in 2018 at the age of 33, Nina Carberry was lost for a while. "I missed it massively in the beginning," she says. "There was a big hole in my life and I didn’t really know where I was going. Obviously, I was also trying to keep my own business of buying and selling horses going, but the buzz of horse-riding was gone from my life."

"From the age of 15, I was used to riding races and now it was hard for me to get my head around it. Then Dancing With The Stars came along and it gave me a new lease of life, a new purpose. Here was something to fight for again. I’m very competitive and I didn’t really realise that until DWTS."

We meet in a café not far from Carberry’s home in Ashbourne, Co. Meath, where she lives with her husband, Ted Walsh Jnr, and their two children, Rosie (6) and Holly (3). Nina looks casually glam, not unlike the other well-heeled diners, but her firm handshake suggests the grafter underneath. 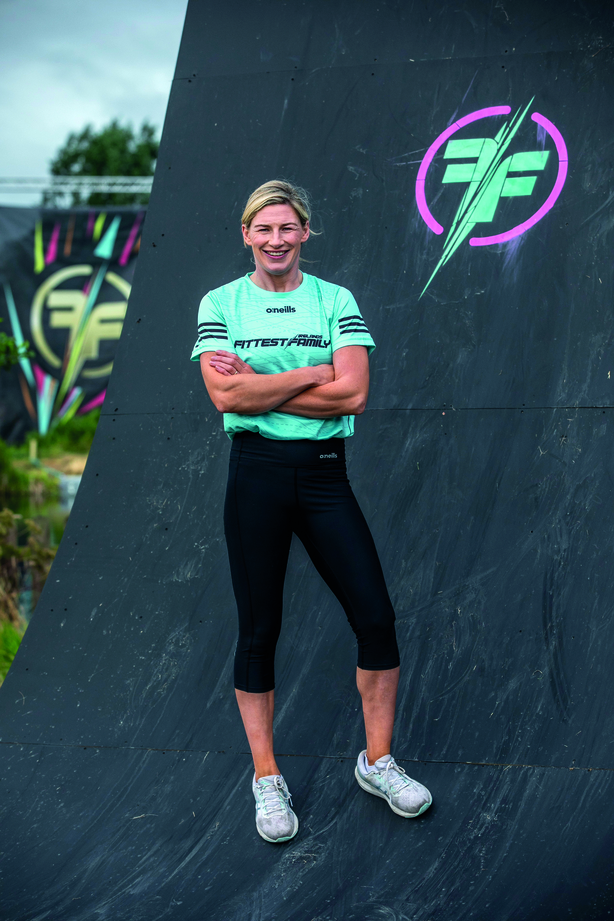 She’s also unexpectedly shy, which makes her achievements in an unforgiving sport, male-dominated for so long, even more impressive. And here she is now, re-invented. So what possessed her to participate in DWTS? "My agent said to me that I’d only have to do 12 hours training in total," she says and laughs. "So I figured I’d see the girls every night. Ted said to me 'Sure why don’t you do it? You’ll be grand.’"

Of course, Nina was far better than grand, but the reality was far from the original pitch: gruelling hours of training, late nights away from family and Sunday evenings fixed in the crosshairs of primetime and the public. "I think everyone expected me to be quite rigid because that's how they see you as a jockey," she says. "Also, because I’m quite a shy person, a lot of my friends were saying 'What are you doing?’ Plus I had two left feet. But then when they saw me, they were thinking ‘Ah you’re not too bad.’" 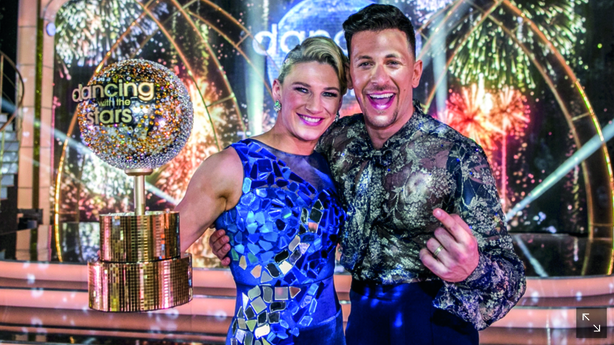 Despite what she says, that competitive streak was always there; it just needed to be re-ignited. "You’re totally there to win as a jockey," she says of race day." Then you come back in and you’re friends again with the people around you."

After she signed off with a win at the 2018 Punchestown Festival, Carberry found herself in limbo. "Racing was my life and now that was missing," she says. Did she get down? "Oh yes. I was trying to find my way again and at that time I didn’t have my business set up properly. I was ready to retire because I had Rosie and she was my focus, but when the business isn’t going as well as you want it, you definitely get down about things." 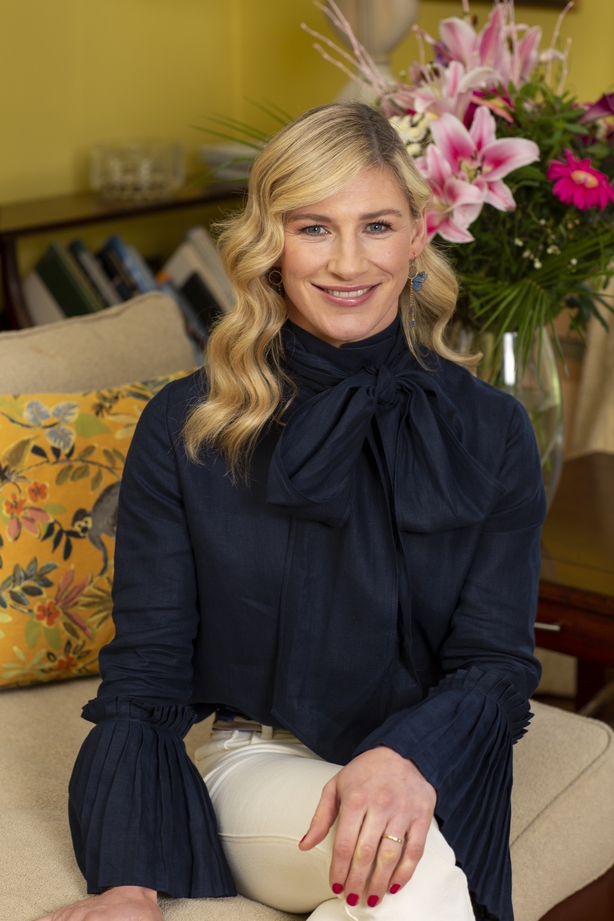 "That was hard to take and I think it’s something that needs to be looked at more, to help sportspeople come to terms with life after they retire. You’re in such a high adrenaline sport for so long and when you retire, you really miss it and get very down. I definitely suffered with that."

By then, she was also a mother to Rosie, born in May, 2017. What did that give her? "It gave me everything. Everything I worked for was going to be for her and that’s how I look at it now. Everything I do is for my girls and to do the best by them." Being a mother was something she always wanted.

"I would have been devastated if someone told me that I couldn’t have kids. It was something that I didn’t want to leave too late in life either, always in the back of my mind and I worried about it. I would have regretted my whole life if I didn’t make the time to have children. It’s a miracle and I know that I’m blessed to have two healthy kids because many people are not so fortunate." 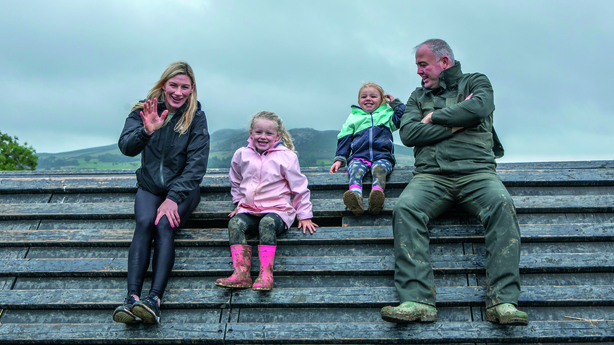 In July 2017, shortly after Rosie arrived, Nina’s father, the legendary jockey Tommy Carberry, died. "Dad had dementia and suffered a good bit towards the end, but at least now I can tell Rosie that she got to hold his hand before he passed. She visits his grave now, says a few prayers. It helps to keep Tommy’s memory alive and Rosie will learn about her grand-dad as she grows up. It will be nice to tell her how much of a legend he was."

Tommy Carberry was quiet but telling influence on his daughter's career. Best advice? "Make sure you only win a race once. Dad never said a whole lot but was always there when you needed him. As were my older brothers Paul and Philip (both champion jockeys)."

In an illustrious career – first female jockey to win a Grade One, second ever female winner of the Irish Grand National – Nina Carberry never considered herself a trailblazer. "That’s what everyone says about me but I never saw it like that," she explains. "I was just competing and going out to win every race. But now, when I look back, I’m very proud that people see it like that and the sport has come so far." She says she never experienced sexism in the sport but concedes it is still there. "Rachael (Blackmore) says she never gets it but in the beginning, she also didn’t get the opportunities apart from the ladies races." 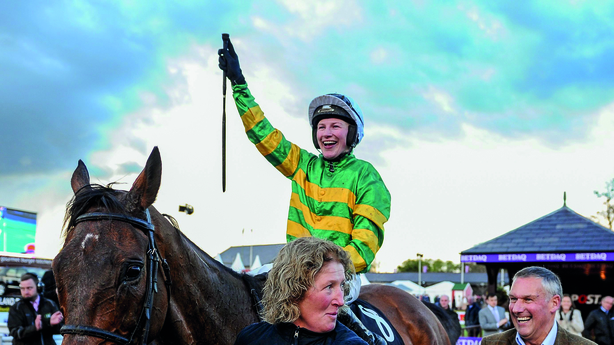 Growing up with five brothers hardened Nina Carberry. "It made me tougher and also probably made me into a bit of a tomboy. So when I entered the male-dominated sport, I was never daunted by it." Was there ever any sexism? "There still is, I believe, but I have to say how it was from my experience and because I had my brothers in the weigh-room, I was never going to get any hassle. They were always going to stand up for me. Plus I was able to fight my own corner on the track and that upbringing helped. If I did have a problem with somebody I’d tackle it head on and get it sorted right there."

She was injury-free when she retired. "I went out in the last race and all I wanted to do was to win it," she says. Like any elite sportsperson, she couldn’t let the fear of injury inside her head. Yet the possibility was always there and we talk briefly about the recent tragedy of 13-year-old jockey, Jack de Bromhead. "So sad. You can’t get away from the dangers of the sport and that’s the reality of it." What about her own daughters getting into racing? ‘I will never say no to them. I’m sure my mum, Pamela, was the same. She probably didn’t want me to do it, but horseracing was all I wanted to do. Mum was never going to stop me and I’m never going to stop the girls, even if I wish that they did something else."

Nina Carberry still watches the racing on TV, but she has her own TV turf now. When we spoke, she had just wrapped Ireland’s Fittest Family (she won the 2020 celebrity version of the show with the Walsh family) and she expects that when DWTS returns early next year, she will get to make a cameo appearance as the reigning champion. So where does Nina keep her DWTS trophy? "With my other bits and pieces," she says. "It’s tiny but it was a bit of craic."

I imagine it was also so much more than that, the leg-up she needed to find herself again and for others too to see her anew.