By now, many of us are well used to whipping out the antigen tests at the first sign of a cough or a sneeze that just won't go away. With all the awareness of the symptoms of Covid-19, it can be easy to forget that the common cold hasn't gone anywhere in the last two years.

How do you tell the difference between a bad dose of flu and a normal runny nose? Jennifer Zamparelli chatted to the show's regular ICU Nurse, Sarah Kearns all about the common cold.

"There's loads of people saying they've common colds and the reason is we're all now back at work, we're all in school", she said. "There was good weather last week, so we're all out and about but now we're back inside because it's actually colder. "There wasn't as many common colds around during Covid because we were all at home, we weren't mixing as much", she said.

The virus lives for "about three hours" after making contact, whether you sneeze or cough into a space or onto a surface. "During winter when it's cold but it's dry, your nose membranes get dry and if you imagine you're pouring water onto dry sand, it gets absorbed really easily." This is why our noses absorb viruses much easier in cold weather.

Not only is the common cold extremely contagious, Sarah said, it's also the leading cause of people not being in work or school. Main symptoms are a runny nose, a sore throat, sneezing "because your nose is getting really irritated".

She said to watch out for a "mild cough", adding: "If you ever heard of... nasal drip, so some of the snot drips down the back of your nose and it can go down into your throat and into your lungs, and cause a bit of a mild, scratchy cough." 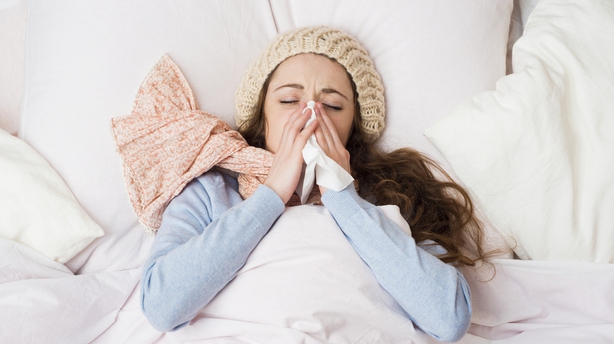 So how can you tell the difference between a common cold and a flu? First of all, they're caused by different viruses, with the flu being caused by the influenza virus. The common cold builds on you gradually, but "the flu, it hits you like a train".

Aches, pains, high temperatures, sweating through your bedsheets, it's a much stronger virus. Not only that, but the symptoms can become much more serious, such as the "gunk in your sinuses" becoming infected.

So how can you treat these various viruses? It's all about "symptom management", Sarah said.

"Antibiotics are for bacterial infections", she added, so this can be used to treat mucous that gets infected in your lungs after a flu or common cold. Keep an eye on your phlegm, too, because the colour of it will help you know whether you're close to being better or not.

"If it's really sort of browny, green you know you're sick. Then over the next day it'll be lighter colour until it's just clear again."

As for the common cold, Sarah suggests going old school: Vicks on the chest and nasal spray, to clear the nose and nasal passages. Albus oil on your pillowcase if you're an adult, or dotted on a muslin cloth and placed near your baby or toddler if they have a cold.

For more tips, listen back to the full interview here.