Last night at the 94th Academy Awards, moments before winning the Oscar for his role in King Richard, US actor Will Smith stormed the stage and hit Chris Rock in the face after the comedian made a joke about his wife, Jada Pinkett Smith.

Referring to the actress' buzzcut, Rock joked: "Jada, can’t wait for GI Jane 2", prompting the actress to roll her eyes before her husband left his seat. Following the slap, Smith was heard saying "Keep my wife's name out of your f****** mouth."

As well as sparking conversation about both Rock's joke and Smith's actions, the incident has shone a light on Pinkett-Smith's experience with alopecia.

"You're self conscious about it and you feel like a bit of a freak." @RyanTubridyShow was joined by Claire who openly spoke about her frontal lobe alopecia after last night’s #Oscars2022 confrontation between Will Smith & Chris Rock. pic.twitter.com/J1VBNnPUfn

Three years ago, while filming an episode of her Facebook chat show, Red Table Talk, Pinkett-Smith opened about the condition, which has no known cure.

The 50-year-old says she first noticed she was losing "handfuls of hair" in the shower and that the experience was "terrifying when it first started".

"It was one of those times in my life where I was literally shaking with fear," she said.

In December of 2021, The Matrix Resurrections star took to Instagram to share a video where she discussed her receding hairline further. She captioned the video:

"Mama's gonna have to take it down to the scalp so nobody thinks she got brain surgery or something. Me and this alopecia are going to be friends … period"

Listener Claire joined Ryan Tubridy on RTÉ Radio 1 to discuss the memorable Oscars moment and her own experience with frontal lobe alopecia.

"I have... it's called frontal lobe alopecia, it's kind of a posh word for receding hairline. I am not someone who is particularly conscious of my appearance but I find it very embarrassing and something I'm very conscious of, so if I was in the public eye and I was an actress, I think it would be very difficult to manage."

While Claire explained that she doesn't condone violence and believes there were better ways for the actor to confront the situation, she admits that she is "kind of grateful" for the way he "blew the lid of this" and shone a light on the condition.

Listen back to Claire's full chat with Ryan Tubridy on RTÉ Radio 1 above. 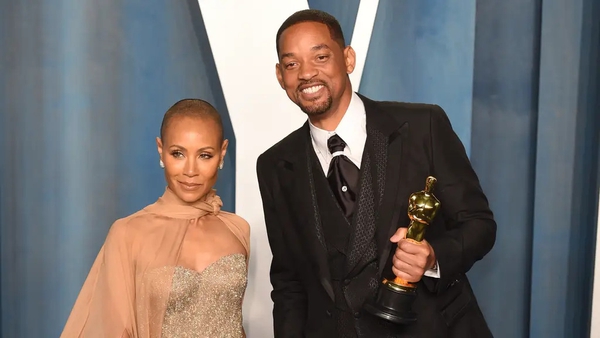 What is alopecia? As Will Smith lashes out over Oscars joke