It might be pretty normal in your household to throw away potato peelings, cauliflower leaves and apple cores, but there’s a new movement encouraging us to use all those bits up to help curb the growing global food waste problem. After all, they are perfectly edible – even delicious, given the right treatment.

Plant-based chef and supper club host Sophie Gordon admits she’s received "a couple of looks" on the train when eating an entire apple, down to the thin stick. "I was just thinking how funny it was, because I know it’s not the nicest part of the apple, but it’s still fine."

Nearly a third of all food produced globally goes to waste; it’s a staggering statistic, and as we all try to be more conscious of our ecological footprint, chucking extra food into a dish instead of the bin seems simple and doable.

Gordon, 29, is part of a growing number of people in the food world proving whole vegetable cookery is possible (and tasty) – similar to the movement using the entire animal. And while many people are getting on board with ordering cod’s cheeks and offal in restaurants or cooking with dairy cow meat, we might turn our noses up at the hairy end of a spring onion.

Her debut cookbook, The Whole Vegetable: Sustainable Recipes For A Healthier Planet, is a collection of seasonal recipes celebrating veg in its entirety (whether that’s whole-baked harissa cauliflower or roasted celeriac), tips for wasting less and using up leftovers, or using fruit and veg in ways you may not have thought of before (like cabbage ramen, chive and chickpea sandwiches, or maple and thyme roasted pears).

It was her chef dad who first instilled the notion of minimal food waste in her. Now Brighton-based, Gordon spent time in Australia where she says "the food isn’t in packaging, you can buy one carrot instead of a whole bunch", and she lived alone: "I’d often have half a pepper or a little bit of cauliflower left, so I always wanted to find new ways to use them, and not waste it."

"With cauliflower or broccoli, people chop off a big portion of the stalk and then chuck it away," Gordon says, "but you can just chop that up and add it to whatever you're doing."

Why are we so conditioned to throw the harder parts away? You can boil those bits first, then put them in a pan. We’re really missing a trick when it comes to lettuce, too. "People just chuck their lettuce away if it’s looking a bit limp, but you can just chuck it in and cook it as if it was spinach," she says. Added nutrients, less waste – win-win.

And why are we so adamant potatoes need to be peeled? Gordon, who has been vegan for a decade, says she tends not to peel them ("I like the skin") and "often you just need to give it a really good scrub, it’s exactly the same, it’s just another part of the vegetable".

If you absolutely must have your mash silky smooth or your roasties bare, you can still make tasty use of the peelings. "Peel them off and chop them really small, then fry them in oil, garlic, salt and pepper, and then they’re kind of like croutons or crisps. You could put them on a salad," she says.

Don’t be afraid to experiment with the parts you often throw out, is the message. "Celery leaves are just the herb – they’re a bit like parsley. You kind of feel like you’ve achieved something, you know?"

One thing Gordon swears by is keeping a ‘stock box’ in the fridge. "If I have leftover onion peelings or something like that, I keep building that box up, and I’ll make a stock maybe once every two weeks," she says. Even if you can’t use it straight away, it’ll freeze."

Naturally, being more sustainable means trying to eat produce only when it’s in season – but if you’re used to seeing every fruit and veg packaged up all year round on your local supermarket shelves, it takes some conscious effort.

"You just sometimes have to be OK with the fact that tomatoes you buy from a supermarket [out of season] aren’t going to be very nice – so just avoid them. Sweetcorn and chestnuts are two of my favourite vegetables, but they don’t have a very long season – you might see corn late May until September, and then it’s gone." But that makes it more exciting, she says, "And then you get used to it."

Ultimately, Gordon says: "You’re not going to be perfect, and you don’t have to be."

The cookbook is littered with helpful non-waste tips and tricks: "More planning, more writing a list of what you’ve got [to get] before going to the shops," she says. "When you say it out loud, people say, ‘Oh that’s really simple’. And we should probably start implementing them into our daily lives to become habits.

"But they are so simple – and that’s why we should do them."

The Whole Vegetable: Sustainable Recipes For A Healthier Planet by Sophie Gordon is published by Michael Joseph. Available now. 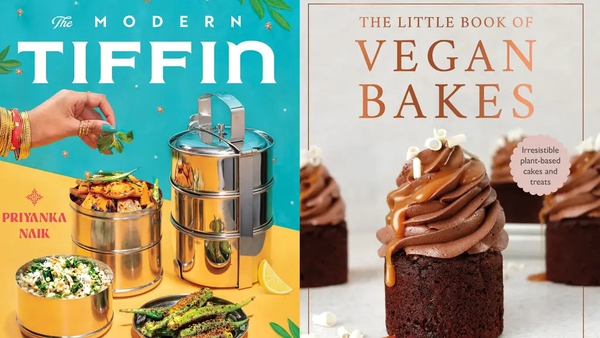 5 of the best new cookbooks to continue plant-based eating