Advocates of social justice don’t come much bigger than Black Eyed Peas star will.i.am. Holding no qualms about calling out political leaders in his own music videos, the US rapper has become increasingly vocal in his support of racial equality – most recently standing in solidarity with Black Lives Matter protesters.

An artist whose own material was adopted as a chant by crowds on both sides of the Atlantic following the murder of George Floyd – The Black Eyed Peas’ hit single Where Is The Love? could be heard ringing out across cities including London and New York – will.i.am firmly believes that fear should never stand in the way of change.

"Society today is super sensitive on any subject, so doing the right thing should not be stopped because you’re afraid of negative reactions," says the I Gotta Feeling hitmaker.

It’s precisely why the 46-year-old musician has ventured to the UK once more, this time in a bid to learn more about the history of black Britain as part of new ITV documentary The Blackprint.

Airing as part of a season celebrating Black History Month, the one-off documentary sees will.i.am swap his judging chair on hit reality show The Voice UK for the nation’s museums and inner-city youth centres, discovering the similarities between two nations that continue to be blighted by racism.

"I’m excited to find out if the UK’s gonna let me back after this doc," laughs will.i.am, as part of the forthcoming hour-long special.

Will.i.am, real name William Adams, is quick to highlight his own surname’s origins as part of the documentary. Noting Adams to be a "very British last name", the hitmaker touches on the fact that historically this would suggest "my ancestors were someone’s property" due to black slaves being assigned surnames by white slave owners.

Covering pivotal historical moments and how these milestones continue to impact the youth of today, the rapper speaks candidly about the disadvantages faced by teens growing up in cities across both the UK and US.

"I always wondered who was the equivalent of our Martin Luther Kings, Malcolm Xs and Marcus Garveys and the folks that fought for civil rights, so meeting the leader of the Bristol Bus Boycott, your version of our Rosa Parks, was fantastic," he says.

Referencing African-American civil rights activist Rosa Parks, who was arrested on December 1, 1955 for refusing to give up her seat on a Montgomery bus to a white man, will.i.am explains that the UK’s Bristol Bus Boycott – which followed the refusal of the Bristol Omnibus Company to employ black or Asian bus crews – stands as an equivalent.

The rapper also goes on to recount memories of his own brother’s detention by US police as part of the soon-to-be-aired documentary, with the rapper vividly describing the police’s use of restraint.

Having admitted that his voice and platform (more than 12.1 million followers on Twitter alone) aren’t enough to further the plight of the disadvantaged in isolation, the musician firmly believes actions speak louder than words.

"You can’t just turn a blind eye and ignore living conditions and the lack of opportunities for folks," says the rapper. "I don’t shy away from bringing up subjects, only because I like to put myself at the centre of solving, bringing solutions."

With the musician’s widely recognised passion for technology intertwining with diversity as part of the pledge, it’s a topic of conversation that sees will.i.am spring to life, talking vividly about his visions for the future of education.

"What is the world going to be like in 2030 and beyond? It’s going to be insane," enthuses the musician, describing how increasing levels of investment, education and automation are set to provide an opportunity for greater equality.

"If you have a skill-set to drive a bus, you should be able to drive a bus," says the rapper. "It shouldn’t be based on colour, it should be based on ability. We’re at a time where there ain’t gonna be no bus drivers. There are no bus drivers in 2035, 2040. Humans aren’t operating that bus. Now who’s writing the algorithms? We’ve gone from driving the bus to writing and programming the algorithms."

The Blackprint airs on ITV at 9pm on Thursday, October 14. 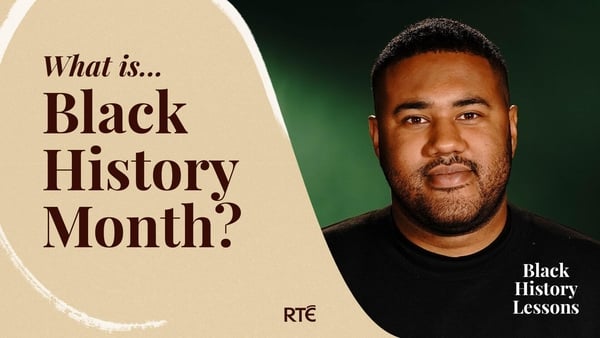 What is Black History Month? A new RTÉ series delves in