In Queer History Lessons, comedian Shane Daniel Byrne is teaching us all about LGBTQ+ history, from flags to voguing and everything in between. In today's episode, we're learning about the interesting history of the word lesbian.

L is for lesbian - the first letter in the LGBTQ+ initialism. Although you might not think twice about the definition today it has quite a unique history in comparison to the other letters. The term literally means "from the Island of Lesbos" the same way Australian means "from Australia". Here’s how it became the term for a homosexual woman.

The beautiful Greek Island of Lesbos, rich in flora, fauna and famous olive groves, is located in the northeastern Aegean Sea (spelt "levos" in Greek and often called Mytilene after it’s capital") and has a population of about 100,000. 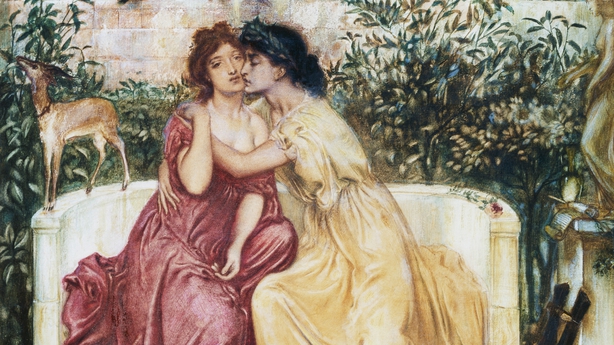 Today there is very little known for certain about Sappho’s life and much of her work has been lost or destroyed, some believe on purpose. In the Ancient Greek world when Sappho’s poetry was written, homosexuality wasn’t considered immoral or wrong but in the early nineteenth century, when classics became a formal discipline, scholars tried to straightwash her work by insisting the love she spoke of for her female friends was "innocent" and in no way "objectionable, vulgarly sensual, and illegal" and her own sexuality has often been debated.

But regardless of this, the modern identification of Sappho with female homosexuality is very strong. The words ‘sapphic’ and ‘lesbian’ are derived from her name and home Island, she’s been used as a symbol of protest for equal rights, and today the village of her birth, Eros, has become a popular destination for gay tourism with about 3,000 – 4,000 visitors every summer. This small village, that has only 1,500 residents, now has three lesbian bars. Three more than Dublin!

Although there is acceptance on the Island today towards lesbian visitors this was not always the case. In 2008 three residents of Lesbos brought a case to Greek courts to try to ban the word lesbian being used to describe gay women who said they were unhappy that the term had been "usurped".

But the case was rejected by the Athens court and the plaintiffs were asked to pay court expenses of €230. With Vassilis Chirdaris, a lawyer for the Gay and Lesbian Union of Greece saying "This is a good decision for lesbians everywhere".