Can growing some plants around your home make you happy? Claire O'Mahony finds out.

From the newest work-out routine to the latest must-try healthy ingredient, we are accustomed to the ephemeral nature of trends that promise to make you feel good. However, the craze for houseplants, which combine aesthetic appeal and well-being benefits, has a long history.

Instagram might be flooded with fond plant parents proudly showing off their feathery asparagus fern and Mexican firecrackers but the practice of cultivating personal indoor green space can be traced as far back as ancient Egypt. The ancient Romans kept plants in marble pots but it was during the Victorian era that houseplants became an obsession as a way people should show off their wealth and taste  by showcasing exotic specimens.

There are many reasons why indoor plants are currently proving so popular, one being that they’re seen as a way to reconnect with the natural world in these tech-heavy times. For millennials, a key demographic in driving the trend, it’s posited that houseplants are something to nurture as they have delayed life milestones like getting married and having children because of economic pressures.

While houseplants have a certain cachet and look impressive on social media, they also serve a broader function of providing connectivity and fostering a sense of community, with plant owners sharing tips and advice online. Lockdown is yet another reason why a love of houseplants is thriving, as spending more time at home has forced us to re-evaluate where we live and look for ways to make our surroundings more pleasant. Plants are proving to be that instant décor upgrade.

Arguably, most importantly of all, is the wellness factor and there are myriad science-backed ways in which houseplants can boost well-being. Indoor plants reduce CO2 and increase oxygen, which can benefit breathing. They’ve been proven to help with anxiety and interaction with plants can reduce physiological and psychological stress.

Houseplants have been linked with improved cognitive function with studies in the US and in the UK indicating that houseplants help with concentration and productivity as well as enhancing problem-solving skills. Yet another study showed that houseplants can stabilise and increase beneficial microbes in built environments.

Houseplants are often celebrated for their air purifying qualities but not all scientists agree about their efficacy in this regard. A famous study by NASA, published in 1989, found that certain plants including aloe vera and the spider plant had the ability to remove harmful volatile organic compounds (VOCs) such as benzene and formaldehyde from the air.

However, more recent research from 2019, which evaluated several previously published studies, found that while plants do remove VOCs, they do so at such a slow rate that air quality is not significantly improved.

According to these researchers, the results of the NASA study, which was conducted in a lab, did not carry across to the setting of an ordinary house where you would need a huge number of plants to clean the air. But nonetheless, there are still plenty of ways that plants contribute positively to our welfare. Even the act of looking at images of plants on screen can have a calming affect according to researchers at Vrijerije University Medical Centre in the Netherlands.

David Smith is the founder of Clay Plants, a contemporary botany company established last year. "There’s a therapeutic element to houseplants, both visually and in the physical aspect of taking care of them," he says.

"It’s a little bit Zen, in that you have to take the time out of your own day to give them water and make sure they’re getting enough light, and you’re not thinking about yourself for a little while. I think also the fact that they’re living makes a huge difference to your relationship to the plant. I get great joy when I see the rubber tree is constantly making new leaves, especially in summer time when they grow and grow and grow and it’s just great to see those natural processes take place."

The houseplant trend, he suggests, is reflective of an increased interest in our well-being. "People are a lot more focused on wellness, whether that’s more people going vegan or trying to lead a cleaner, healthier lifestyle and exercising more. I think that people see houseplants as being part of that whole ecology," he says.

For Pat Keville, horticulturist and owner of Plantstore.ie, plant care is ultimately self-care and lessons we can learn from looking after our foliaged friends include the importance of hydration, the benefits of fresh air and sunshine and how essential nutrients are key for growth and development. While the pursuit of wellness can sometimes come with a hefty price tag, Kelville believes that developing an interest in houseplants doesn't have to be prohibitively expensive.

"From under €10 s to a couple of hundred euros for the larger specimen plants, it’s still not hugely expensive to have a large plant indoors," he says. "It’s very accessible to have it as hobby."

The inexhaustible amount of houseplant-related information on the internet doubles down on this accessibility, and as a subject matter, there’s always something new to learn. "The world of botany is endless. You could spend an entire lifetime reading about different plants and you probably wouldn’t get through a tenth of it," says Smith. However, he cautions against plant owners striving to achieve social media perfection.

"We get people who message us who are concerned that the plant has developed a blemish or that something isn’t going exactly right. We always try to drive home to people that that’s the joy of having something that’s alive. The plant that you see on Instagram might look absolutely perfect but that’s not always going to be the case. It’s a living thing and it will have its ups and downs and the joy of it is being able to care for it and seeing it flourish and grow."

Indoor inspiration: the best plants for each room

Kitchen
"We spend a lot of time in kitchens and modern kitchens have a lot of light and shelving in them, so they can be handy for trailing plants like spider plants and devil’s ivy. Both of those like the humidity in the kitchen caused by cooking," says Plantstore.ie’s Pat Keville.

"The other thing I’ve found through the years is that people who have plants in kitchens, they see them a bit more and they look after them a bit more."

Bathroom
Bathrooms in general are also humid but they can also be a little cooler or darker than a kitchen. "Spider plants do well in bathrooms that have a window," says Keville. He’s also a fan of ferns, a group of plants that predate dinosaurs and are estimated to be approximately 350 million years old.

"Ferns do really well here, like a Boston fern and the table fern," he says. Something to be aware of in general for plants in all rooms is that during the winter months, when the heating is cranked up, the air can become dry.

"Water the plant less in the compost and spray a little bit more around the leaves to create humidity," advises Keville.

Bedroom
People are sometimes concerned about having plants where they sleep because plants release CO2 at night. Keville suggests trying the snakeskin plant (also known as mother-in-law's tongue or Sansevieria trifasciata).

"The stoma on this plant opens at night and adds oxygen to the bedroom," says Keville. "Aloe vera is good for the same reason but it needs a lot of light at some point during the year. If you have a bright bedroom, good, and if not you can bring it on its holidays to a hotter spot or even outdoors during the summer months." 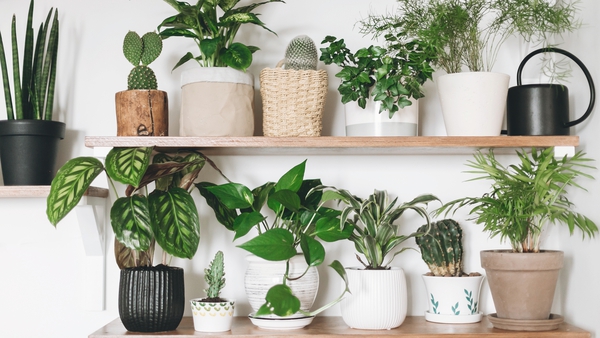