Alex Pettyfer is no stranger to smashing things up. The Magic Mike star, who cut his teeth in destruction while helping on his father’s construction jobs, got to finally capitalise on these skills in his latest film, Echo Boomers.

The thriller, about a millennial gang of art thieves, aims to put a new spin on the classic heist film by adding some sociological themes into the mix. He plays the leader of a gang of equally disaffected millennials who feel they are forced to pursue a life of crime because of unjust economic opportunities. The gang rob wealthy people’s homes of valuable artworks and vandalise the houses in the process as an act of protest about income inequality.

"I have a weird relationship with smashing stuff up," Pettyfer muses over Zoom. "My dad was a construction worker, he was a builder, and so when I was growing up my dad would always bring me in to help either knock down a wall or help with bricklaying and so for me, it’s a gentle reminder of hard labour as a young boy, helping my dad out.

"And I was a little bit safety cautious, I was wondering why we didn’t have goggles or gloves! But obviously, it’s a movie and the things we are smashing up are not real, they are sugar glass."

Pettyfer stars opposite Patrick Schwarzenegger (son of Arnold), as Lance, a recent graduate who studied art history and took on a load of student debt in the process of getting his degree. He soon discovers the job market isn’t exactly flush with opportunities and so takes up his cousin’s offer to join the "start-up" he works at.

Lo and behold, he is soon part of the gang, identifying the most valuable artworks on behalf of their big boss, Mel, played by Michael Shannon, and smashing up huge glass chandeliers.

"That was fun," Schwarzenegger admits. "I had a great time doing it, I only got to do it once or twice because the whole first half of the movie I’m not really doing any of the heists and everything like that – those were fun days to film and let out a little stress."

But stress relief aside, the film does point to some real issues facing young people. "I think this movie does have a lot of political and economic commentary without putting it right on the nose," says Schwarzenegger, "but it’s fun because at the end of the day it’s still heists and robberies – which people love.

"And unfortunately but fortunately, people can root for these guys because they understand it. I’m not saying it’s the right way to go about it, it’s not, but it is a system that has not been updated for a long time that is messed up and does create false promises."

"The reality of student debt and the system of it haven’t evolved over the years," adds Pettyfer, 30, also known for roles in  I Am Number Four and Endless Love. "And that translated into this movie in a weird dynamic where all the wrong choices that someone can make are for relatable reasons. I really caught on to that theme."

It has not escaped his notice that generational inequality has been hugely exacerbated by the coronavirus pandemic, with graduates leaving school and university to a bleak jobs market. "It feels timely," the actor says but he remains hopeful about the prospects for young people.

"We live at such a rapid moving pace with technology. Someone said to me, ‘What are the millennials going to do?’ and I said, ‘What is interesting is when we are pulling the arrow back, we have to figure out how to let the arrow go and fly forward’.

"I think for a lot of people, they are going to band together. Some of the richest companies in the world are Amazon and Google and innovative companies where it’s less about the qualifications that you have and more about the appeal of who you are as a human being, what you are bringing to the table.

"I think a lot of people will soon find that when they do leave university or college, maybe they might find more success in the passions that endure over those four or however many years, and by banding together with groups of people and creating these small business, they can grow into bigger businesses." 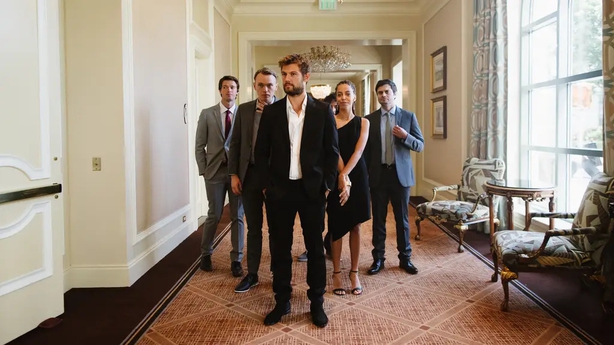 Schwarzenegger, 27, who made his film debut as a teenager in The Benchwarmers and has since appeared in Stuck in Love, Grown Ups 2 and Scouts Guide To The Zombie Apocalypse, before landing his first starring role in 2018’s Midnight Sun, nods in agreement.

"The film was a way of commenting on it without making the film all political-based," he says. "It has the commentary without being all about that and I think that is what makes it fun and intriguing for the audience, because at the end of the day they don’t want to watch a documentary on something telling them this is what is messed up, but it’s a fun way of using film as a medium to touch on those issues."