Room to Improve is back and better than ever with Ireland's favourite architect, Dermot Bannon, creating diverse and beautiful homes, pushing budgets to their limits, installing glass windows like nobody's business, and inspiring some of the country's funniest tweets.

David and Nessa
On last night's episode, we met David and Nessa Conlon, a couple who bought a 1990s split level detached bungalow with plans to move in with their twin boys, aged 11, and 7-year-old daughter.

With a budget of just over 220k, Dermot was faced with a huge challenge as the house was basically a series of staggered terraces making their way up the site. Our hero architect presented a design that saw the house open up with a raised pavilion at the rear, some concreté in the kitchen and a pergola in the garden - all of which would cost just a little more than the couple had planned on spending.

Next, it was time to tackle the garden - a task so momentous that Dermot had to call in back up. Audiences were delighted to see garden supremo Diarmuid Gavin walk onto the scene to take on one of the most challenging gardens to date.

But did it all go to plan? If you missed last night's episode, you can catch up on RTÉ Player now. 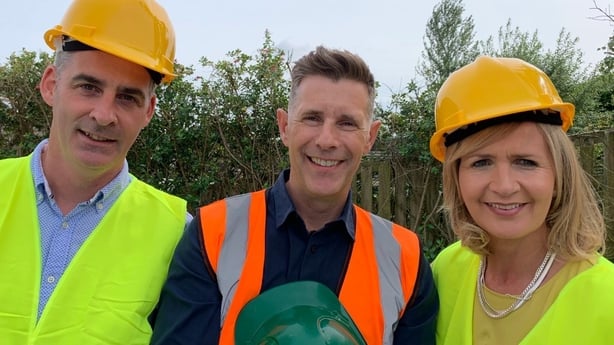 The tweets
We love Dermot, we love Diarmuid, we love strong-willed homeowners and we love the show's brand new quantity surveyors. Most of all though, we love reading your reactions on Twitter.

From fashion commentary and concrété appreciation to wishing for a Francis Brennan cameo, here are some of the funniest tweets from last night's Room to Improve.

Me a few years back: "Who'd watch a tv show about someone building a new kitchen?"
Me, now: "Nessa, you've taken on a garden you can't handle, the budget is spiralling out of control and you don't appreciate how much Dermot loves concrete. Get a grip, girl."#RoomToImprove

Diarmuid Gavin wearing all white to go digging in the garden. The lunacy #roomtoimprove pic.twitter.com/XXDFE1NuCq

Client at the top of their garden when Dermot tells them the revised price of landscaping #roomtoimprove pic.twitter.com/RHgSu3CPWw

The thrill of it all

The thirties hit me hard lads.
And I love it.

Will Bosco make an appearance?

All the doors in this house remind of Bosco's Knock Knock open wide, see whats on the other side Magic Door! #RoomToImprove @DermotBannon pic.twitter.com/2cZPsZc9Wj

Dermot Bannon: "I think a house should explain itself."
I've lived in flats so bad that if they explained themselves there would be no words, just the middle finger. #roomtoimprove #loveyoudermot

So much room for activities

Tonight is the anti Netflix night ... A nation is coming together all saying one word ... "DERMOT" #roomtoimprove

A pergola, is it?