Well, GoT fans, our watch has ended. After an incredible eight seasons, Winter has come and gone and we can now, finally, put our fan theories to bed.

Needless to say, the final episode has left viewers with some thoughts, questions and many, many, emotions.

We've gathered some of the funniest tweets for you to scroll through while you process that very unexpected ending.

If you haven't watched the finale, look away now!

My theory:
Sansa ends up on the Iron Throne
Arya becomes the hand of the Queen
Daenerys kills Jon Snow
Arya kills Daenerys
Tyrion continues to sh💩t the bed
And I miss all of it because I'm traveling. #gameofthrones @SophieT pic.twitter.com/VxQxkzH6Ah

When you’re traveling internationally on the day of the #GameofThronesFinale pic.twitter.com/B5yTSRw9Vs

The only time I teared up was when #Brienne wrote what she done wrote. #GameOfThones

Sansa Stark,cause she ain’t a little bird no more. She’s comin’ 4 that crown & Snow doesn’t want it & he is in love with a Dragon goddess turned straight up psychopath. & Daenerys was dead as soon as Arya witnessed the mother & daughter get burned alive. Yep. Bye bye Dragon Lady. https://t.co/XZjhw0rGUg

Craycray incestuous family rules 7 kingdoms. Baddies from the north invade so most put away their differences to fight together. After winning they go after the craycray Queen who didn’t help them fight and everything ends up in a hot mess and a big disappointment. The end.😘 https://t.co/IA9qHeJCLE

"Shakespeare, but with zombies, dragons, and an odd fixation with castration." https://t.co/BrKkf43ppD

I boy is thrown out a window, turns into a bird then lands on a throne.

TYRION: People love stories. And nobody has a better story than Bran.

JON SNOW, WHO WENT FROM STARK BASTARD TO LORD COMMANDER TO KING IN THE NORTH, WHO WAS LITERALLY KILLED AND RESURRECTED, WHO SLAYED HIS QUEEN/AUNT/LOVER FOR THE GOOD OF THE REALM: [Jim Halpert look to camera]

So they resurrected Jon Snow and revealed his huge Targaryen secret just to send him back to the wall. pic.twitter.com/j3Hc5f2w7c

"What's west of Westeros?"
My wife: The Resteros

Tyrion: ...but what we found out is that each one of us is a brain...
Brienne: and an athlete.
Sam: and a basket case.
Davos: a princess.
Bronn: and a criminal.
Tyrion: does that answer your question?

Drogon is out in the wild with Dany’s dead body and I’m just supposed to be fine with not knowing anything about that? #GameofThronesFinale pic.twitter.com/653nNPww9K

Yall reduced Danerys Targaryen to a Snow White?? To a Cinderella?? To putting her faith in a man?? PUT WOMEN IN THE WRITERS' ROOM. #GameOfThronesFinale

Drogon really suffered the most. He lost both of his brothers and now his mother. No dragon should have to go through this #GameofThrones #GameOfThronesFinale pic.twitter.com/Wai0YDjwhU

When you don’t contribute in the group project & still get an A #TheFinalEpisode #GOT pic.twitter.com/UwsAC1JYLH

TYRION: People love stories. And no one has a better story than Bran

ARYA, WHO LEARNED SHAPE-SHIFTING AND MURDERED THE INVINCIBLE ICE KING OF DEATH: Bran has what now

what brienne really wanted to write in that knight book: #GameofThrones #DemThrones pic.twitter.com/MkuoNrzD6q

So this is what Brienne wrote in the back of the Book of Brothers.#GameofThrones pic.twitter.com/GwE5Wk2TGi

Whoever opens that book next after Brienne of "didn’t let the ink dry" Tarth, gone be like#GameofThrones #demthrones pic.twitter.com/tSiNAT4oKn

Queen of our hearts

sansa @ all her haters after outliving all her abusers, getting the north's independence and being crowned the queen in the north #GameOfThrones #SansaStark #SansaHive pic.twitter.com/x2D5RICoBo

Will watch Arya the Explorya.

The ending we deserved

The only satisfying conclusion to Game of Thrones is if it ends with a Tormund bottle episode, where he’s up north, just chilling and getting over Brienne, really starting to take care of himself 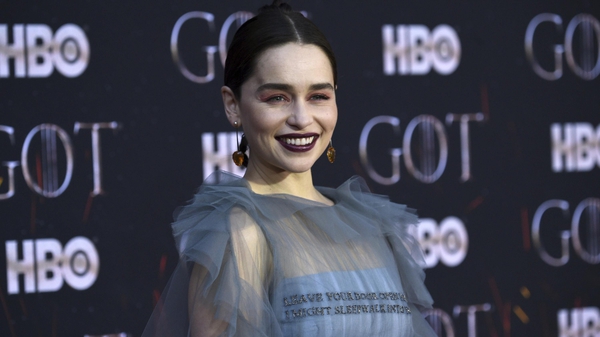 All of the most incredible Game of Thrones-inspired makeup