They've toured the country’s B&Bs, but now Daniel and Majella O’Donnell are off on a much longer trip, as they drive an RV across America's Midwest. They tell Jess O Sullivan about their newest adventure.

It's hard to imagine Daniel O Donnell's voice as anything other than calm and collected. However, put him on a pair of waterskis being pulled at high speed behind a motorboat and you will hear him make sounds in a register even he didn't know he possessed. This is because Daniel is terrified of water, but being the good sports that they are, he and his wife Majella agreed to give it a go.

The challenge is in the first episode of their new show for RTE, Daniel and Majella's USA Road Trip, that brings the magic of their successful B&B Road Trip show across the Atlantic. "I nearly died in the water," he says recalling his experience of the sport popular in many US states. As he gives it his all to stay upright on the skis, Daniel can be heard breathing, almost Lamaze style, before tumbling with a screech into the water. To say it's comedy gold is an understatement. "I thought I was going to pass out. I can swim but when I'm out of my depth in the water I have a wild fear of it, when I don't know what I'm dealing with. I thought I wasn't going to manage it." 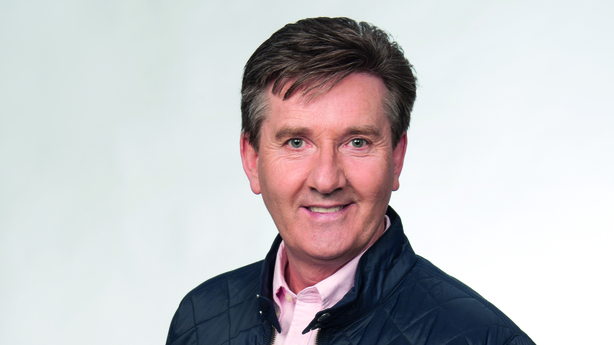 Despite his own anxiety, Daniel admits that Majella had it tougher. Although she’s not afraid of water, Majella found herself perched on the shoulders of a burly American man, almost 10 foot in the air while waterskiing. Not ideal for someone with a perforated eardrum which causes her to lose her balance and feel dizzy and nauseous when up high. "Yes, I was absolutely terrified at the waterskiing. It felt high. There was also the problem that I'm not that agile and when I was on his shoulders, I had to wrap my legs around his back to grip on, but I'm very stiff like that as I have a bit of arthritis."

Facing down their fears ultimately proved to be a lot of fun and they could give themselves a little pat on the back afterwards. "I couldn't believe I got up there to be honest," says Majella. "I would never have done it except for it's on television so you're egged on in that respect, and I wouldn't do it again. But even though the waterskiing was scary, I like being challenged."

Viewers of the two seasons of B&B Road Trip will know that Daniel and Majella are pretty much game for anything, so they didn’t hesitate at the idea of travelling across America's Midwest in an RV. In fact, it was the culmination of a dream for Ireland's favourite couple. "Majella and I talked about doing a road trip across America in an RV a number of times, but we never got as far as doing it. Then the opportunity came up because I had a gig to get to in Chicago, and also the fact that it was an extension of the B&B Road Trip." 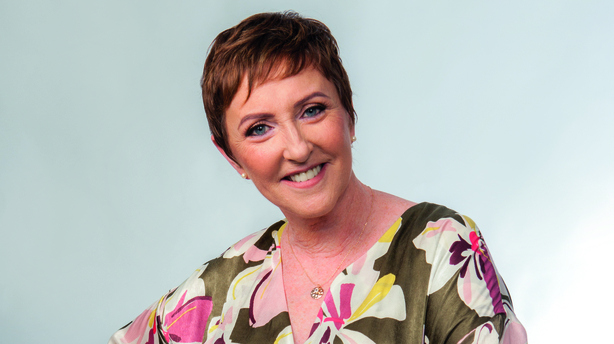 Daniel's music is popular in this part of America, where he had a show on public television which introduced him and his music to a whole new audience of country music fans. Producers used his fanbase Stateside when planning the itinerary for the pair, as Daniel did a call out for fans to submit suggestions for places he and Majella could visit along the way. The list of activities include baseball, a hot air balloon ride at sunrise over the Black Hills in South Dakota, and dressing up as cowboys to take part in a re-enactment of a Wild West shoot out with Calamity Jane and Wild Bill Hickok in Deadwood, South Dakota, a daily performance for tourists during the summer, although many tourists possibly didn’t expect to see am Irish country singer as Wild Daniel in the show.

Of course, there were plenty of Daniel O Donnell super fans to meet along the way too. Majella says until trip it really hadn't hit home just how popular Daniel is in the middle of America. "You wouldn't necessarily choose to go to these out of the way places. We'd been driving for miles and we stopped in a town for something to eat and go to the toilet. It was so empty, big wide streets but really empty." Majella says she doesn’t intend to disparage the town in any way, but to emphasise just how isolated these locations are and how far people live from each other in America’s huge landscapes. When people give directions or talk about their neighbour "just up the road", she says, what they actually mean is 50 miles away, maybe even a hundred. "I went up to the jukebox in the café we were in for the craic. And bugger me if there wasn't five albums belonging to Daniel on it. I couldn't believe it. I took pictures to show people at home that he really has infiltrated the States because for him to be there, on that jukebox in the middle of nowhere, was ridiculous. I couldn't believe it." She recalls a woman at the shoot out in Deadwood, who recognised Daniel and said, ‘I have your CD playing in the car.’ She brought him over to the car and right enough when she put on her CD player Daniel was singing." 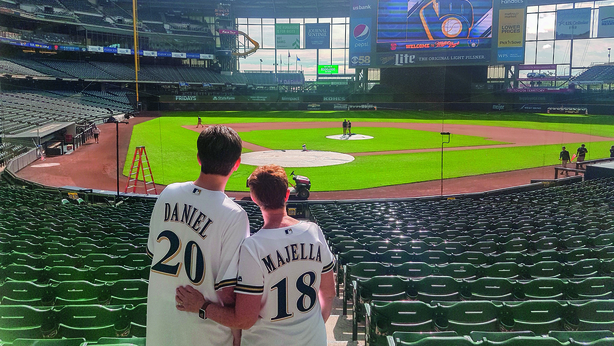 En route, one of the super fans they called on at home gave Majella a bit of a start. "One woman we visited had a picture of Daniel, with just trousers on, so nothing on from the waist up, in her bedroom. I thought, ‘Well that's a bit weird,’ going into someone else's house and seeing your husband half-naked up on the wall."
While there were plenty of fun moments throughout the trip, there were also more thoughtful and touching encounters. When they stopped at a shop in Sioux Falls, South Dakota, that sells Irish items, including Daniel's CDs, they met a man who Majella describes as "real country American – an older man with longish hair." He had a very personal connection to the music, Daniel explains: "His wife had died two years ago, so it was still early on for him. He said, ‘My wife listened to you all the time. She sure loved you.’ He was looking for a particular song she had loved, and when I sang it for him he had tears coming down his face because it brought all his feelings to the fore. It was touching because you wouldn't expect it of him."

Interactions like this, says Daniel, remind him why making music is important. Even if he can’t meet people in person like on Road Trip, he connects with them through his songs. "Music is amazing. Of course, it makes people happy, but also when people are going through tough times, music can really help them, especially if someone is sick or has died. It's amazing how music can be a comfort. It's not making things any different but it's giving some kind of comfort and it's a privilege to do that." 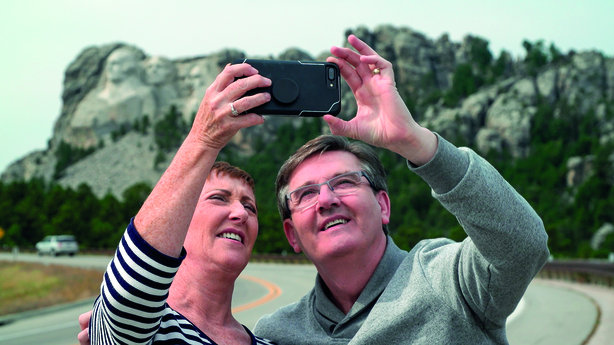 Undoubtedly the third ‘star’ of the show is the couple's RV, which Daniel and Majella used for travel and accommodation for the entire trip. Although they admit their initial response to the RV was lukewarm, they ended up warming to it later. "We were expecting a big huge thing," laughs Daniel. "We thought we were going to be like Dolly Parton, in a big bus. It wasn't very big but it was absolutely lovely. We enjoyed it immensely, but it could be very noisy inside. One night it was raining heavily, and it was like there was someone dancing on the roof – the racket of it."

Spending long hours driving and living in such close quarters on the RV would test the strongest of couples and Majella says with a wink that at the end of the trip it was definitely "time to go home." Daniel says that once again they survived some "heated conversations" on the road and came home with some lovely memories. "We have these shows now and I know in time to come we'll be able to look back and think, ‘Imagine we did that.’" Majella agrees. "Yes, it's the memories – that's exactly why we put ourselves forward for these things." 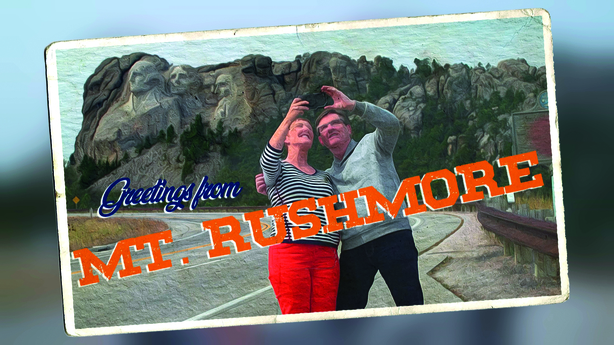 Anyone who doubts Daniel and Majella's contribution to the country's tourism industry need only hear the unscripted story of them checking in at Dublin airport on the way to the States. "We met a couple from America, who were never at one of my shows, but they said they had just done a B&B road trip in Ireland following our route for a week. They got the DVD and watched the first series. I know some of the B&Bs definitely got people coming to them. Some people would come because they were fans, but others just saw the beauty of where they were located." It seems that Daniel and Majella's adventures on the road have inspired a wave of Americans to come and explore parts of Ireland that are rarely in the spotlight. So who knows? Next summer, there may be a reciprocal wave of Irish Daniel O’Donnell fans driving across America's Midwest in RVs fit for a king of country music.

Watch Daniel and Majella's USA Road Trip every Sunday on RTÉ One at 9:30pm.