Sometimes a micro-trend occurs that is so bizarre, it’s difficult to comprehend quite how it’s managed to achieve its own pop culture moment.

Take Mrs Hinch, for example. If you haven’t heard of her, you soon will. The Instagram-famous cleaner, whose real name is Sophie Hinchliffe, has gained more than a million followers on the app, through sharing pictures of her immaculate Essex home.

Thousands tune into her Instagram stories to watch her bleaching her toilet, wiping the smears from her mirrors and scrubbing the grease from her cooker, with satisfyingly gleaming results.

Her followers have dubbed themselves the ‘Hinch Army’ (#HinchArmy has a staggering 60,000 impressions on Instagram and counting) and even coined a new phrase – ‘hinching’ – for the act of cleaning their own homes.

There’s no double glamorous but down-to-earth Hinch, who says she "wants to make chores fun", has achieved overnight success with her home hacks. But for many in her online community, her service goes far beyond providing tips for getting stubborn tea rings off a coffee table.

Watching other people cleaning can, it seems, be a type of digital therapy, and a quick scroll through Hinch’s comments finds that in some cases, it can have a profoundly rehabilitating effect on their mental wellbeing.

"I suffer with bad anxiety and panic attacks and, believe it or not, the only thing that helps ground me through a bad bout of anxiety is ‘hinching’," commented one user.

"Before I found your account, I was so bad that I would stay in bed all day because it was my ‘safe place’, whereas now I’m getting up everyday, I’m cleaning, taking pride on my own and shopping on my own.

"You’re not just sharing tips and tricks on cleaning, you’re literally helping people like me find themselves again."

"You are my support mechanism," said another. "I’m 19 years old and have bad social anxiety, some days I struggle to get out of bed and face the world. But then I watch your story and it makes me want to get up and do something."

So why exactly does watching a woman clean her home have such a soothing effect on the brain? The answer could lie in something called autonomous sensory meridian response (ASMR), a type of physical reaction that causes people to experience a pleasurable sensation in the body when they hear certain sounds or watch certain activities.

People who experience it often describe the feeling as a tingling that begins at the scalp, flowing down the back of the neck to the spine. Scientists have described it as sort of like having a "brain orgasm".

"Our recent fMRI [functional MRI] study showed that specific areas of the brain are activated during ASMR," says Craig Richard, a professor of biopharmaceutical sciences at Shenandoah University, Virginia. "These brain areas are similar to those activated during ‘affiliative behaviours’, where caring behaviours are shared between two individuals."

Richard says that a classic example is monkeys grooming one another in the wild, which is similar to a human going to the hairdresser – a popular genre of ASMR video online.

"No one has measured the neurochemicals which may be involved in ASMR, but oxytocin is a likely candidate," Richard notes. "Oxytocin is released in the brain during grooming behaviours and induces relaxation."

Researchers have found that ASMR sounds and visuals – such as whispering, cutting hair or pages turning – can have a uplifting effect on people with anxiety and depression. A Swansea University study found that 80% of participants who were exposed to ASMR content said it had a positive effect on their mood, while 69% said it eased their moderate to severe depression symptoms.

It’s no surprise then, that ‘ASMRtists’ have boomed on YouTube – and cleaning, with its slow but sure movements, is fast becoming a way to tap into the trend. Although ASMR is not a form of mental health treatment, experts say it’s sort of similar to mindfulness meditation – the psychological process of focusing on the physical present and bringing one’s attention to experiences occurring in the present moment.

"Watching cleaning videos can definitely induce ASMR in some viewers, as long as the sounds are gentle, the motions relatively slow and predictable, and the person has a kind disposition," says Richard.

"The core aspect of most ASMR videos is a caring person demonstrating or performing a helpful task – which would include someone giving you cleaning tips."

He believes that kindness is crucial, as human brains constantly and unconsciously monitor other people for signs that they might be a threat.

Brain tingles aside, there’s also positive psychology to back up the mental benefits a clean space can have on the mind.

A study, which used linguistic analysis software to look at the way the way 60 women discussed their homes, found that those who used language like "cluttered" or full of "unfinished projects" were more likely to be depressed and fatigued than women who described their homes as "restful" and "restorative."

The research, published in the scientific journal Personality And Social Psychology Bulletin, also found that women with untidy homes had higher levels of cortisol, the body’s stress hormone. A similar Scottish Health Survey found that that carrying out regular, vigorous housework could cut feelings of anxiety and stress by up to 20%.

Of course, there are some concerns about the popularity of cleaning content – particularly as they may be triggering for people with obsessive-compulsive tendencies. But unlike beauty and fashion bloggers (whose content is often focused on physical appearance), it’s refreshing to see a new type of influencer that everyone can relate to on some sort of basic level.

Even in the digital age, it seems that for many, home is where the heart is – or at the very least, a sense of total peace and calm in the chaos of daily life. 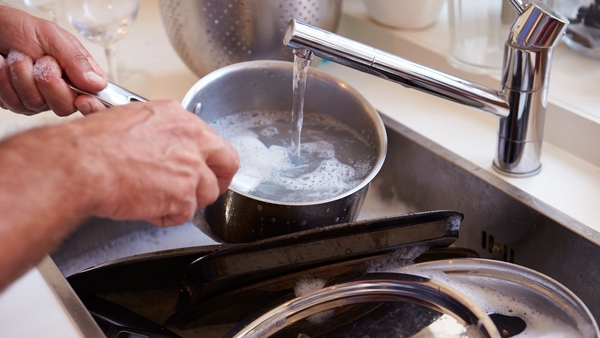 How often should you clean your tea towel, sheets & towels?