This year’s series of Super Garden reaches its climax tonight on RTÉ One. The show is being broadcast as part of RTÉ’s Bloom Live coverage and features the judges deliberating over which garden to award the prestigious title of Super Garden winner 2018.

This year’s series has seen the creation of five very different innovative and original gardens and each designer will feel like they are in with a chance of success.

Will the title go to Darren Joyce for his Lock Keeper’s View Garden which he created for the Nassiris in Stepaside or will it be Catriona Hassett’s Outback Oasis for the Egans in Nenagh?

The final competitor is Anthony Faulkner. Will his Tranquility Garden for the Hartnett's in Limerick win out?

The show is being broadcast as part of RTÉ’s Bloom Live coverage and features judges: Gary Graham, Monica Alvarez and Brian Burke deliberating over which garden to award the prestigious title of Super Garden winner 2018 (and the prize of being recreated at this year’s Bloom Festival in the Phoenix Park).

Once the judges have reached their decision the three then travel to the winning garden to surprise the triumphant designer.

The show ends live from Bloom with the winner proudly displaying their recreated garden and with the presentation of the Super Garden winner’s trophy.

This year’s series of Super Garden reaches its climax with the sixth and final show on Thursday 31st May at 7.00pm on RTÉ One.

You can meet the winner and the judges at a Supergarden panel discussion in the RTÉ tent at Bloom in Phoenix Park this Saturday, June 2 from 1-2pm. Bloom is taking place until Bank Holiday Monday June 4, 2018. 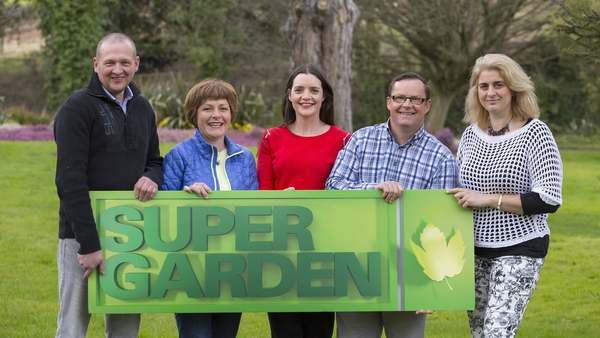 Will tonight's Super Garden go up in flames? super garden