It was a tradition in my old place of work (and hopefully still is) that whenever somebody left the company they would be given a large A3 card with a photoshopped image of themselves on the front. The card would be signed by all the staff, and typically the photoshopped image referenced the employee’s personality or the sterling work that they had done during their time in the company.

My card was that of Clark Kent ripping open his shirt to reveal the Superman logo and suit underneath. My face was superimposed on Mr Kent’s body, and the reference I can assure you was not that I was a ‘Superman’ but rather Mr. Geek Chic like Clark himself.

Fast forward 12 months, and my then three year old – Thing 1 – who was (and still is) a Superhero fanatic came across the card as we were clearing out the spare room. He literally froze in astonishment staring at the card while momentarily glancing back and forth between me and my now alter ego Superman. He couldn’t believe it. He genuinely thought that I was once Superman (the man boobs giving away my early retirement) and not one to disappoint I took on this role with aplomb and embellished it for all it was worth.

I told tales of Lex Luthor, detailed my battles with General Zod, explained the menace that was Darkseid and talked about sharing burgers with Spiderman and Batman in Planet Hollywood. He loved it. I loved it. He saw me as Superman - my wife saw me as a SuperPrat but it didn’t matter because Thing 1 was ecstatic and as any parent will know that’s all the matters. No Kryptonite in the world was going to change this.

As time went on and Thing 1 got older, he continued to ask me questions about my cape-flying ways. Every book we read and every toy shop we visited resulted in further recounts of embellished tales of my superhero days. To be honest, I thought that he’d outgrow it and granted I didn’t extinguish the myth but being honest, I loved it.

I loved that he was still so innocent as to think that the Dadbod standing in front of him was once Superman. My wife, the real superhero in the house, could only stand back and dream about having a husband with a six pack and bulging biceps. 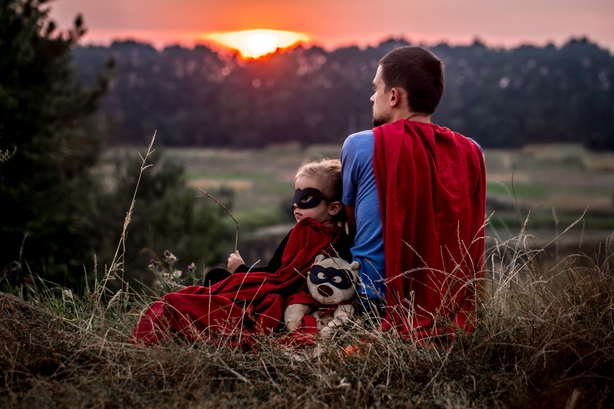 Yesterday, everything changed however.

Sitting down for dinner, I asked Thing 1 about his day. As usual, he had a great time in school and mentioned that he played superheroes with his friends. But he said that when he told his friend that I was Superman, his friend laughed at him. When asked how this made him feel he said ‘Not good’.

I looked at my Wonder Woman wife, and together our hearts sank. I’d have to tell him. I’d have to shatter my his dreams and I’d have to do it before school the next day. I felt both sadness and joy that this little boy was still so innocent that he believed everything I told him.

So this morning I faced the biggest battle of my Superhero career. I got up early with Thing 1 and as we sat together having breakfast I told him that I wasn’t Superman. I explained about the photoshopped card and that when he first saw it he was too young to understand.

He seemed to take it all in but what came out of his mouth next almost floored me...’So you were never a crime-fighter daddy?’ ‘No son I wasn’t. Does that make you sad?’ He turned away with watery eyes and proceeded to finish his Weetabix– the same Weetabix that I told him helped me with my super powers. I felt awful, and if I’m being honest I was close to tears myself.

We hugged and in fairness to the little guy, he took it in his stride and moved on pretty quickly. We went about building some Lego structures, and I withstood every urge I had to tell him that I was once a Lego character... I’ll tell him another time, I thought.

Thinking back to all the fun we had over the years discussing superhero tales and battles, I don’t think I would have changed anything. Kids are innocent and that’s one of the loveliest things about them. I genuinely felt emotional seeing Thing 1’s face change when he realised that I wasn’t the crime fighter he thought I was, but it was better he found out now than be made fun of about it in school.

This whole episode taught me a very valuable life lesson about how gullible kids are, and I’ll be extra conscious in future about the type of ‘tales’ I tell them. One thing is for sure though, I’m absolutely dreading the day that I have to tell them about Santa and - to a lesser degree - the Easter Bunny.

If you have any comments I'd love to hear them