The Irish Times lead tells us that 185 applications, more than 30 percent of all claims to the government's symphis-i-otomy redress scheme, were unfounded, as the women were unable to show they had undergone the procedure.

In her report to the government, the assessor of the scheme, Judge Maureen Harding Clark, says that even some of the women who have been awarded compensation for having gone through the procedure, probably never had. The paper runs the analysis of the details and an opinion piece inside.

The lead for the Irish Independent is that global investment banks are being discouraged from setting up in Ireland after Brexit because they are deemed to be high risk. A spokesman for the Central Bank has denied this, saying it has met a number of financial services firms about Brexit in this context.

There are calls for the establishment of a 24/7 "emotional wellbeing centre" in response to what's now being referred to as a "suicide crisis" sweeping Cork. In the last two weeks, 16 people have died by suspected suicide, and the rate of suicide in Cork city and the county is twice the national average. That's the main story for the Irish Examiner.

The Irish Dail Mail has seen a report from the Joint Committee on Finance, Public Expenditure and Reform, where the recommendations include, we're told, that motorists here should be able to buy cheaper car insurance abroad, consideration to be given to a State-backed car insurance scheme and the appointment of a Minister for Insurance. 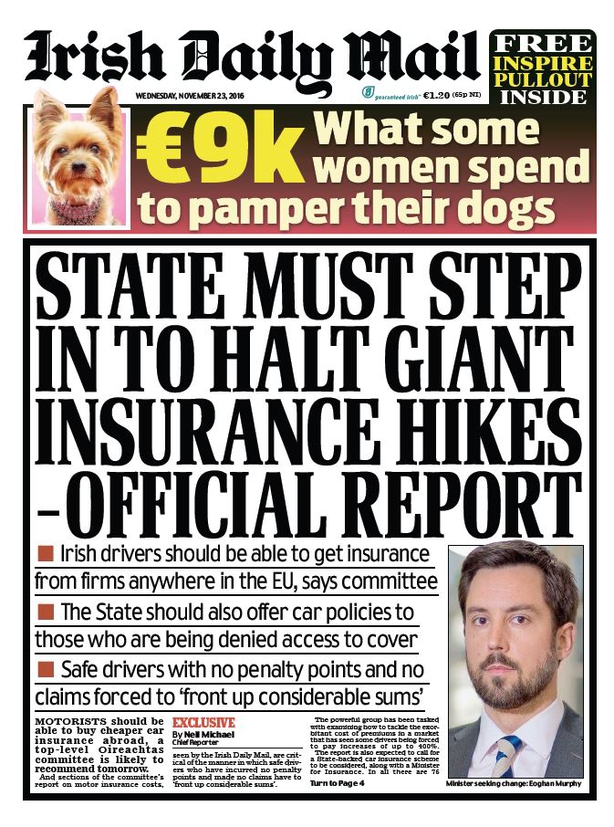 In the coming weeks,  Ryanair will start recruiting 2,000 new cabin crew that's in the Examiner - while in the Independent, the airline's Michael O'Leary is reported as saying government ministers in Britain have no idea of what they're doing in re Brexit, comparing them to Dad's Army: It'll be all right, Sergeant Jones. "If we get it wrong," he adds,  "I'm sure we'll come charging back into the UK with more aircraft and airports, but frankly, there's very little evidence, apart from some mildly lunatic optimism over here, that it will be all right on the night. ... they're all talking to themselves.

The Irish Sun runs a piece saying that the controversial ban on visible alcohol, dubbed the Booze Burqa, has been binned as a result of a revolt by some TDs, including John Paul Phelan of the state's Finance Committee who said : "I didn't get into politics to close village shops..."

The Examiner's front page runs  a very sad story about the father of Karen Buckley, murdered in Glasgow in April 2015. Yesterday, John Buckley was in Glasgow to pick up his daughter's posthumous Master's degree in occupational therapy. 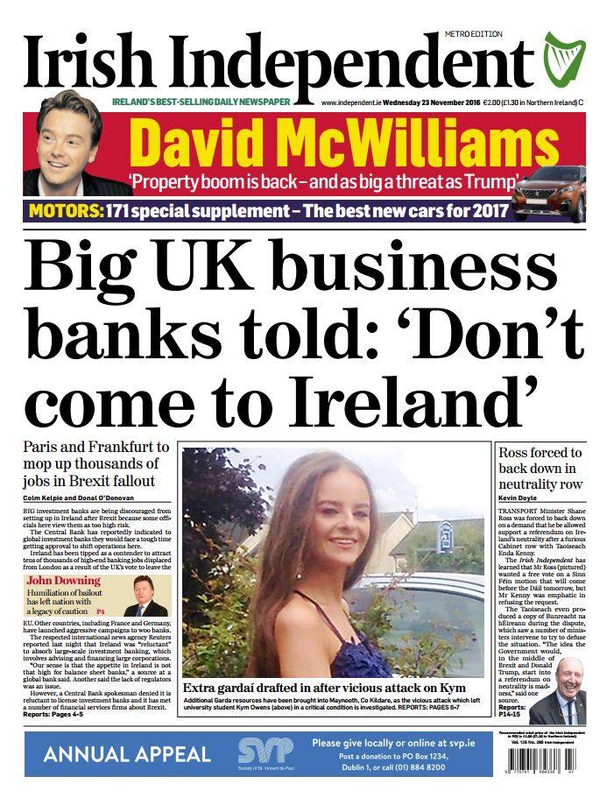 The death of RTE's Nuacht reader, Padraig O Mealoid is mentioned in most papers, who note also that he acted in TG Ceathair's soap serial, Ros na Run.

Meanwhile, Seachtain, the Independent's supplement for Irish speakers, leads with the headline: Imni faoin bhagairt stailce ar gach leabharlann sa tir - fearing that all libraries in the country may close because there are threats of strike action over increased opening hours in the areas of technology...

The Irish Daily Mail reports  A Suggestion from researchers at the University of Herefordshire: supermarkets should consider the  installation of slow lanes for elderly shoppers, who value the chance to chat when they're out shopping.

And in the same paper, columnist, Fiona Looney is rehearsing for handwash day, obeying the demands of medics who say that for hygiene purposes in Britain, one should wash one's hands for the length of one verse of God Save the Queen, while over here, it should be for one verse of Happy Birthday to You. She's dying to see the full playlist an hopes it will include [Im just a] Teenage Dirtbag..

And this from the front page of the Times... Stephen Collins writes that when the movie, The Quiet Man first came out, the Irish Embassy in Washington feared it would create a false impression of Ireland; and more recently the Irish-American writer Malachy McCourt echoed this, saying the film showed Ireland as a country of wife-beating, priest-ridden, blather-talking gombeen men getting drunk, standing around gossiping -  and then erupting into stereotypical Irish behaviour. Say what you mean, Malachy...