The main story for the Irish Independent this morning is that the deficits in the pension funds of the state's largest companies and semi-states have ballooned, raising fears that far more schemes are too close - this, he writes, means that the much-feared pensions time bomb is now exploding for workers who are not in the public sector.

The Business supplement of the Irish Times also leads with this, telling us that the deficit in these funds has swelled by 160 percent in the first nine months of this year. The problems are, we're told in both papers, due to an upheaval in the bonds markets and very low bond yields over the course of 2016.

The Irish Times main story is that the Government and Department of Finance are, respectively, "playing down" and "studying" the recommendation of the European Commission that EU countries increase spending next year to help the ailing European economy. The paper says, that with half of new money available for the 2018 budget already allocated the Commission's recommendation is likely to increase pressure when pay talks actually commence with the public sector trade unions. 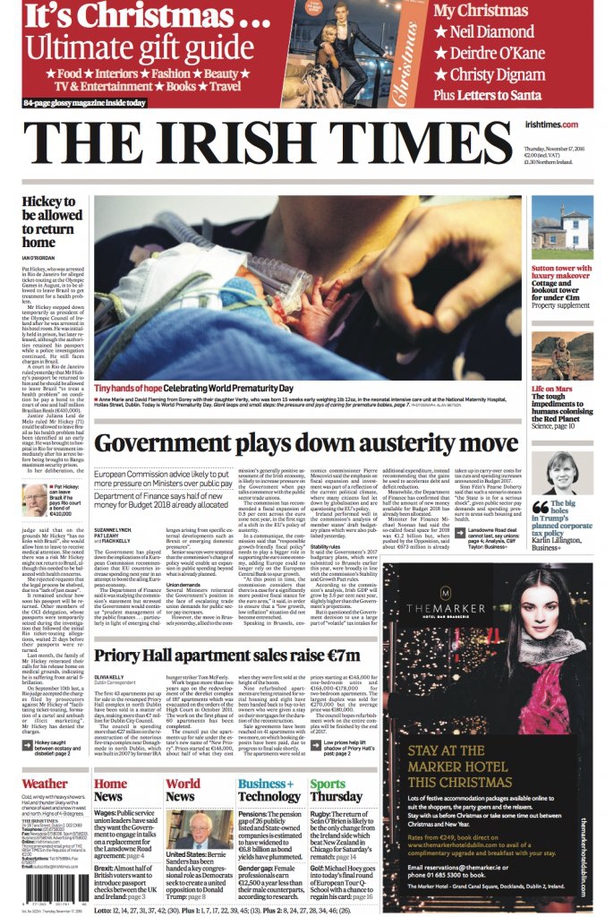 And those prospective pay talks, whenever they occur, make the lead for the Irish Examiner, which tells us that public sector unions have warned of a "free for all of the industrial action and strikes" if they have not begun by January.

The Irish Daily Mail's main story concerns its analysis of Exchequer figures, and warns that in addition to the 850 million Euro already allocated in the last two budgets, to complete the task of bringing salaries to pre-boom levels would cost 1.4billion Euro and would add the equivalent of five percent to the top rate of income tax. 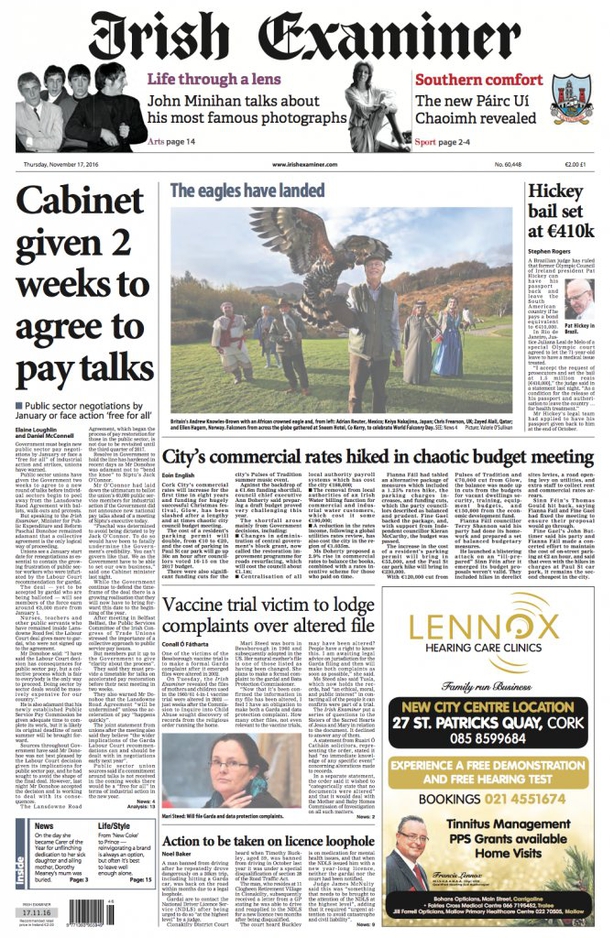 In his Irish Independent column, Richard Curran writes that everything President-Elect Trump has said and done since his victory suggests he is preparing to ditch huge chunks of his campaign promises, to focus on one thing only - how to ensure his peers in corporate America make more money in the short term; that doesn't sound great, he writes, but on an economic level, it might be a lot better than the global chaos many, including here in Ireland, feared.

In the lead for today's Farmers Journal, we're told that in ten days time, 2,000 bulls will be loaded on board ship for transport to Libya, an event which will, they say, be welcome news for beef farmers since any serious resumption of live exports to Libya would be welcome.

The Examiner runs a story about that controversial plan to screen off alcohol from public view in grocery stores. The junior Health Minister, Marcella Corcoran Kennedy, says the paper, has told colleagues she is open to finding solutions to the concerns of small corner shops on the issue, including the possibility of exemptions and other moves.

According to the Irish Examiner, there are serious worries concerning a leaked memo, said to show that An Post is to institute mobile post offices - which, campaigners on behalf of the retention of rural post offices for social and community reasons.

And almost all of the papers mention that possible homecoming, for medical treatment of a health issue, of Pat Hickey of the Olympic Council of Ireland.

The supplements are falling - a sure sign that Christmas is looming closely now. Almost every paper offers them as inclusions or pullouts, sometimes multiply so; even the Farmer's journal offers its own 32-page" festive food mag" along with its offerings on Machinery and Country Living.

The Irish Independent's business section, runs a lengthy interview with the security chief of Facebook, Alex Stamos( who previously headed a Yahoo team called 'The Paranoids') and who says that while there's a big focus on incredibly sophisticated attacks and threat actors online, when you look at the statistics, most of the harm is being caused by people reusing passwords in multiple places.

The planned launch of The National Party, which has an anti-immigrant, anti-Europe and anti-abortion agenda, according to the Examiner, its timing planned to coincide with the victory of Donald Trump, has been cancelled.  Many papers give this a mention, with The Irish Sun giving it splash treatment on page five - and forecasting the coverage on page one, with the headline, Donald Ducks.