Some papers still continue with the Trump jokes.

A headline in the Irish Daily Star says "They think it's comb over... it is now". The main headline is: "The West Wig".

The Irish Sun shows the reaction of the cartoon character Homer Simpson to the news. Sixteen years ago, an episode of The Simpsons jokingly predicted that Donald Trump would become president. "D'Oh!" says Homer, as the prophecy comes to pass.

For most other papers it's no joke, and the reaction to America's new president is more like the Irish Daily Mirror's. Its front page has an image of the Statue of Liberty with her head in her hands. "What have they done?" is the headline.

The Irish Times in a page-long editorial, says Americans have voted for a man who is the most unprepared president in modern history, a racist and abuser of women, who has threatened to prosecute and jail political opponents and has said he would curtail the freedom of the press.

"He lies without compunction. He will cut taxes on the wealthy and gut Obamacare for the poor. Is this really the America they want?" the paper asks.

The Irish Independent says in an editorial that "had the Capitol Hill commentariat looked beyond the super-sized, pumped-up personality, they might have spotted a standing army of disillusioned, fed-up voters who felt written out of the script.

"The most bitter thing for Democrats -- especially the Clintons -- to swallow, is that it is still the economy, stupid!" says the paper.

The Irish Sun in an editorial says we need to calm down. Trump's victory speech was commendably moderate, says the writer, even if his attempts to unify America now are hard to swallow.

The Irish Daily Mail reminds readers, over two pages, of some of the things Trump has said during the election campaign, on such subjects as Muslims, women, immigration, gun laws, climate, his rivals and himself.

The Irish Daily Star's columnist Ian O'Doherty, one of the few commentators to approve of the election result, reckons the losers' bitter tears make it all worthwhile.

Colm Tóibín, in an opinion piece in the Irish Times, says: "While Trump will be entertaining the cameras with more of his ill-informed and offensive views, his vice president Mike Pence and others like him will be quietly, effectively and ruthlessly setting America back 50 years."

Dan O'Brien, in a comment piece in the Independent, remarks that the United States' internal strength should be enough to see it through four years of presidential demagoguery. But that the global order is much more fragile. 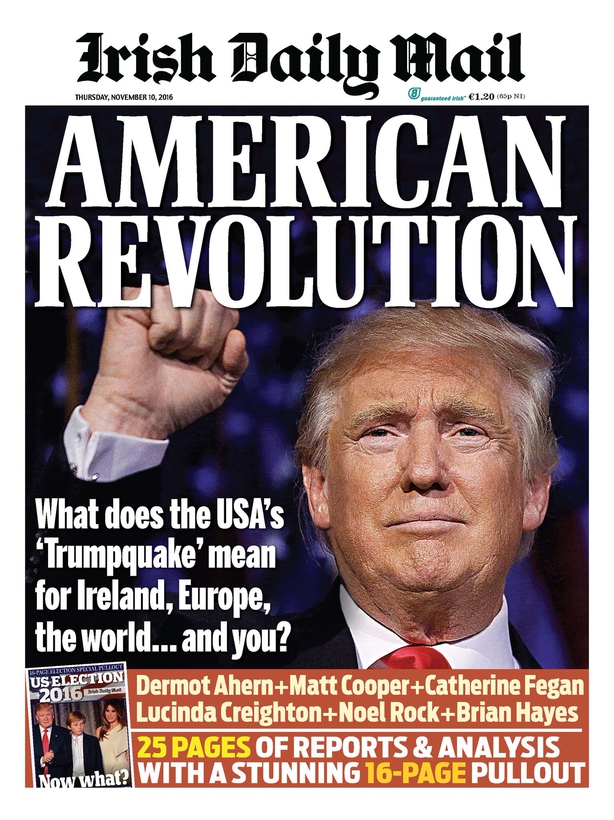 O'Brien says if Trump conducts the foreign affairs of his country as he has said he will do -- on international trade, climate change and military co-operation -- Ireland, Europe and the world will become less secure and less prosperous.

Pat Leahy in the Times considers the particular effects on this country. "Ireland, more exposed to the squalls of the international economy than any other country now faces the second dramatic transformation of one of its closest allies in a few months.

"First Brexit. Now Trump," he writes. "The world is changing fast in ways we will almost certainly regret. There is no good side to this."

"Following the election of Donald Trump as president of the United States," says the Examiner, "the time we live in has just become more interesting than ever -- and dangerously so."