It was Irish rugby's greatest day

The Irish Times has a fine photograph by Billy Stickland of the two teams facing each other before the match. As the New Zealanders lined up to perform their haka posture dance, the Irish dropped into a formation of their own to form a figure eight, in tribute to the late Anthony Foley who, as the paper says, served his province and country well wearing the number 8 jersey.

There are more men in green on the Irish Examiner's front page, but in this case, they are Cork City players celebrating their victory against Dundalk in the FAI Cup final yesterday. "Sweet success for Seánie," says the headline -- that's Seánie Maguire, who scored Cork's winning goal in injury time.

The Irish Examiner leads with a report that with mounting pay demands by unions after a 40-million-euro proposed deal for gardaí, there is pressure on the government to fast-track the new Public Service Pay Commission.

The 200,000 secondary school pupils who are locked out of school indefinitely from today, because of the teachers' pay dispute, are highlighted in the Independent and Times lead stories.

The Irish Daily Mail leads with the same story, and a quote from Fianna Fáil's education spokesman, Thomas Byrne. He told the paper that "literally nothing" had been done to deal with the crisis, and it was "a shame on the government". 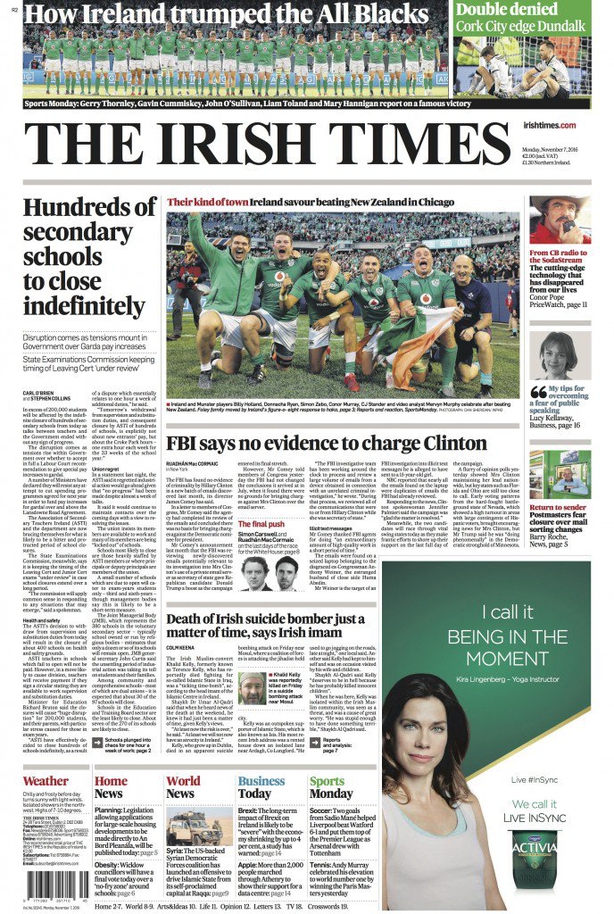 The seizure of weapons by Gardaí in Cabra, on the north side of Dublin, is the main story for the Irish Daily Mirror and the Irish Daily Star. Both papers reckon that the two submachine guns and three hand guns were destined for the Kinahan drug gang.

The Irish Sun reports that three jockeys, two of them Irish, have been arrested in England on suspicion of rape, and released on bail.

There is ample coverage of tomorrow's US presidential election. Catherine Fegan reports for the Mail from West Virginia. She spoke to a 92-year-old man, Ed Shepard, who worked for 66 years at a petrol station in a prosperous town.

But the pumps -- and the prosperity -- are long gone, and Mr Shepard will be voting for the Republican candidate Donald Trump. He said: "Trump is well supported here. It's all to do with the coal and what he said about opening the mines. They know he is lying but he is giving hope."

Caroline O'Doherty is in Pennsylvania for the Examiner. She says that if Trump has attracted unexpected support, he has alienated many others, not just from himself but from the election process. "I just wish it was done already," said the night manager in a rural roadside hotel. 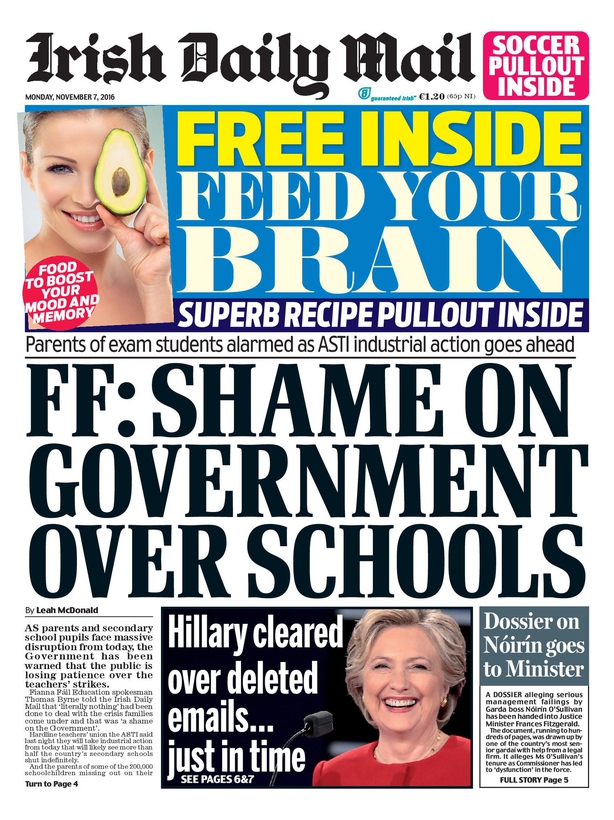 Kevin Doyle in the Independent tells a similar story. Most Americans just want it to be over, says the headline over his reports from New York. Doyle writes that for months now people have watched the warped sitcom of Trump versus Clinton, amused and bemused.

The Independent also carries an analysis piece from the Daily Telegraph, in which Tim Stanley says President Trump could be a reality, and it might not be as bad as some people fear.

The Times disagrees, and in an editorial calls for a vote for the Democratic candidate Hillary Clinton. The paper is concerned about a rekindled zeal among Trump voters, and says the election is "a choice between continuity and wild unpredictability, internationalism and xenophobia, a commitment to the rule of law or a contempt for everything except self-interest. 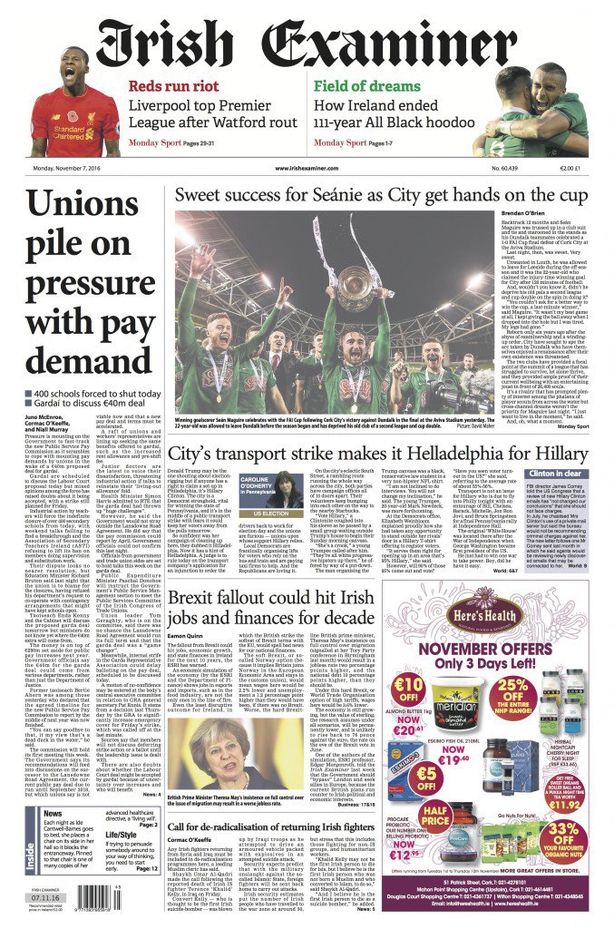 "But we don't get to vote," says the writer. "All we can do is hope, for our sake and for that of the citizens of the US, that Clinton wins this election. America, listen to the better angels of your nature!"

Elsewhere in the Times, Simon Carswell reports from North Carolina, one of a dozen so-called battleground states in the election, with a high percentage of black voters.

He quotes current president Barack Obama, campaigning for Hillary Clinton, telling a rally there last Wednesday: "We won't win this election, potentially, if we don't win North Carolina. So I hate to put a little pressure on you, but the fate of the republic rests on your shoulders."