So what does substantial mean?  Well the Irish Independent story tells us that the GRA president Ciaran O'Neill would not be drawn on what such an increase would be, but the Irish Daily Mail gives us an indication of what it believes it clearly wasn't.

'Gardai reject 3% pay offer' is the headline there. In the piece underneath Jennifer Bray writes that the paper understands that to have been the offer but she says, the GRA has said it's not acceptable as it doesn't come anywhere near the 16.5% it had originally sought in pay restoration. 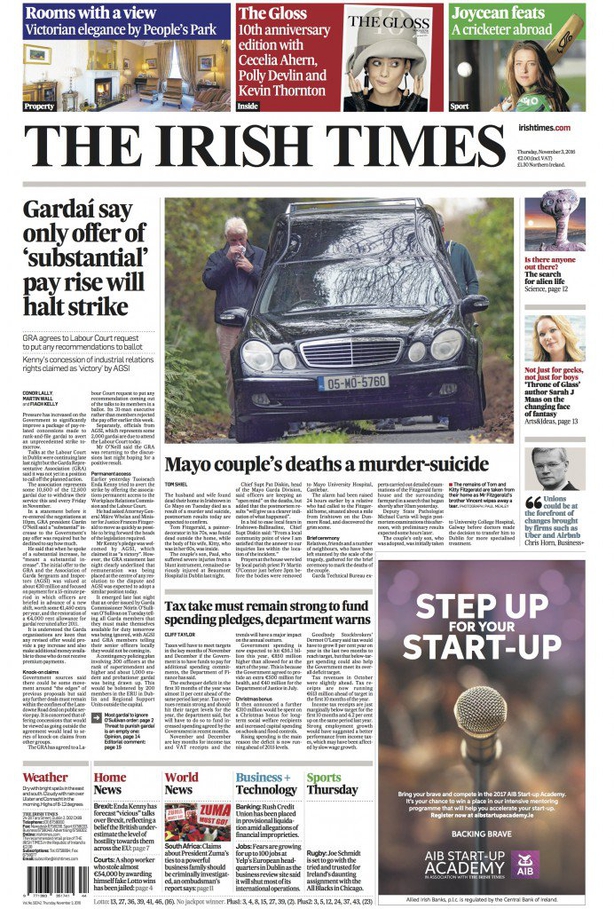 The Irish Examiner has a front page story on all this too, headlining the efforts which were made late last night.  'Last ditch Labour Court talks bid to avert Garda Strike' is the headline on the piece there, but for its lead story, the paper goes with more on the Foster Abuse case concerning the woman known as Grace.

'HSE bid to sack 'Grace' whistleblower' is the claim made in the headline. The story reports the details of the case highlighted by John Deasy under Dail privilege last night.  We're told that, in referring to the situation faced by both Grace and another woman, while they were in foster care, he hit out at the limited laws meant to prevent abuse and said:  'If what happened to these people happened to a dog, there would be a greater chance of conviction'.

There is follow up today on the awful deaths in Irishtown in Mayo, of Tom and Kitty Fitzgerald.  Both the Irish Times and the Irish Independent find front page space to report on further details given yesterday by Gardai.  The Times reports the local Chief Superintendent's saying he was satisfied that 'the answer to our inquiries lies within the location of the incident'. 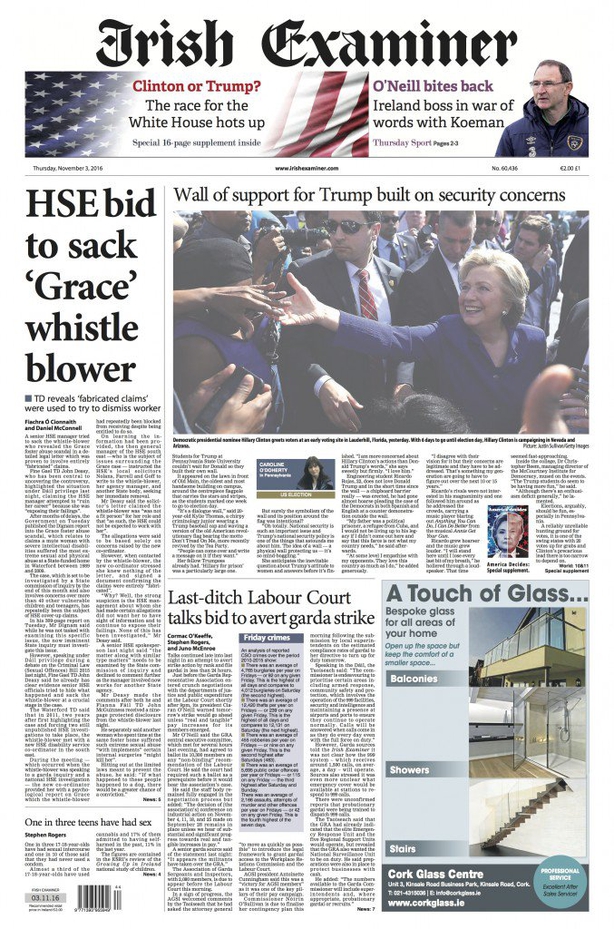 There are many national fears of course, over Brexit and there is much coverage today of yesterday's first All Island Civic Dialogue on it.   'It was informative, inclusive, but vague - at times bordering on bland' says Elaine Loughlin of it all in the Irish Examiner.  She tells us that while many arguments and voices may have found a place to speak out, the problem with Brexit is that it is very difficult to come up with solutions to what is at present a theoretical problem.

In the Times meanwhile Miriam Lord was underwhelmed by it all:  'Lots of buns but no fun at Great Brexit Speak off' is the headline over her piece, while the editorial writer in the Independent is dismissive - 'Brexit forum an abject waste of time by Kenny' is the verdict there. 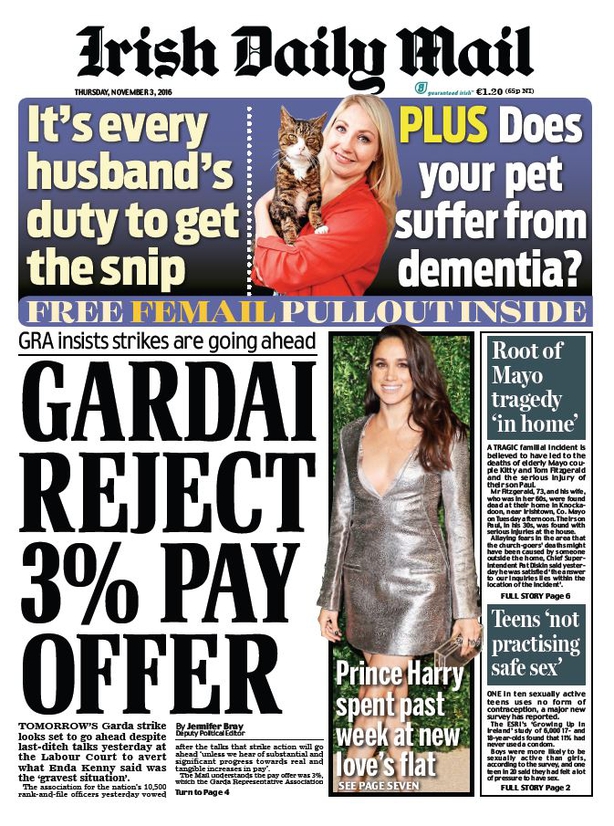 What will be the verdict delivered by Americans next week?

There is, of course, plenty of further coverage of it this morning.

'Trump's wall of support built on security fears' says the headline on the piece about it all on the front of the Examiner.   Caroline O'Doherty visited Penn State University where, she tells us, students supporting Trump had built a wall of their own in support of him.  In the Irish Times meanwhile Ruadhan MacCormaic seeks out one particular Hillary supporter.  'Ex-president combines policy mastery with folksy anecdotes' he says under the headline:  'Bill Clinton takes road less travelled in low-key role, batting for Hilary.

And there's more.  The Examiner prints a special 16 page supplement.  The lead story in the Independent Business Week supplement is headlined:  'Markets plunge on fears of Trump victory' and the main  reports in the Independent and Mail news pages focus on the words of Barack Obama yesterday:  'Vote will decide the fate of the world' is what the Independent headline says is his view.

But if the view of Americans is that Trump should prevail, well Victoria White, writing in the Examiner, gives her view of why it will have happened.   Both Democrats and Republics are to blame she says, for the fact that over the past 40 years, a cult of individualism has eaten away at the struts of American social cohesion like an infestation of hungry rats.   And so she says, IF we wake up to greet President Trump next week,  'don't blame the emails.  Don't blame the FBI or the Russians.  Blame capitalist individualism which has rampaged through Western societies since the 1980s, and resolve to shut your gate to it.'