Two of this morning's papers lead with transport-related stories.

"Rail lines could close due to Iarnrod Eireann funding crisis" is the lead headline in The Irish Times, which reports that a draft report which has been given to Transport Minister Shane Ross details how our rail infrastructure has deteriorated to such a degree due to funding shortages that it has impacted on safety.
Martin Wall reports that the rail network needs an investment of more than 600 million euro over the next 5 years. 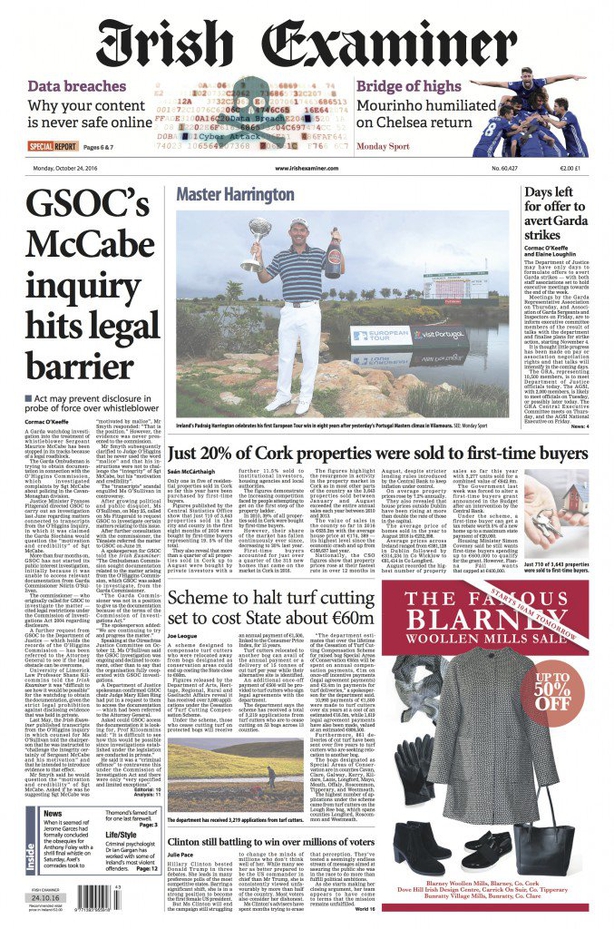 The Irish Independent leads with a report by Paul Melia which tells us that with an increase of 6,300 vehicles using it every day in the past year the M50 is now at 'breakdown point'.
Almost 159,000 cars use the country's busiest motorway every day. "Motorway or carpark?" is the question posed in one of the headlines there.

A tragic road death, meanwhile, provides the lead story in today's Irish Daily Mirror and Herald.
The Mirror reports that 13 year old Lee Henry saved his friend's life when he pushed her out of the way just before he was struck by a car in Coolock in Dublin on Saturday night.

Both papers report that a man in his twenties was questioned about the schoolboy's death yesterday.

Elsewhere on the front pages:

The Irish Examiner leads with a story about how the GSoc investigation into the treatment of whistleblower Maurice McCabe has been stopped in its tracks because of legal restrictions on the disclosure of Garda documents.
The paper's lead editorial is also devoted to this story today...while the headline over the analysis piece in today's paper reads: "Legal restrictions on GSoc worthy of Kafka".

The Garda strike, meanwhile, provides the lead story in today's Irish Daily Mail.
The paper reports that high-ranking Gardai will be patrolling the streets if the strike goes ahead. 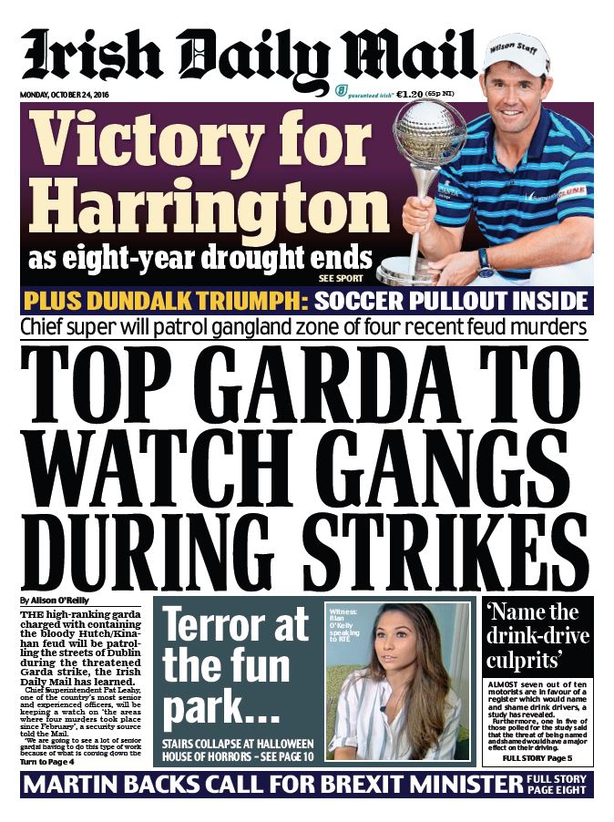 The Irish Daily Star leads today with an interview with Audrey Fitzpatrick in which she defends her husband Dave Mahon and says that he didn't have anything to do with her daughter Amy's disappearance.
Mr Mahon is serving a 7 year jail sentence for the manslaughter of her son Dean.

"Everyone was crying and screaming" is the lead headline on the front of today's Irish Sun.
25 year old Rian O'Kelly gives an eyewitness account of the incident at Tayto Park yesterday when a staircase collapsed at one of the visitor attractions at the theme park.

And you'll also be hearing Rian's account of what happened later in the programme.

Just 20% of residential homes sold in Cork so far this year have been bought by first-time buyers.
That compares with 39% in 2010.
That's in The Irish Examiner which also runs with a story about how the scheme designed to compensate turf cutters who were relocated away from designated bogs...could cost the State close to 60 million euro.

Back on the front of The Irish Times it is reported that two senior experts in midwifery recruited in the west after the death of Savita Halappanavar have resigned only 2 years after taking up their jobs.

Theresa May is to off the leaders of Northern Ireland, Scotland and Wales a role in shaping Brexit's strategy for leaving the EU. That's also on the front of the Irish Times.

In sport, Padraig Harrington's first European Tour win in 8 years at Vilamoura yesterday is one of the big sports stories of the day. He's pictured on the front of The Irish Examiner under the caption 'Master Harrington'.

But finally, Munster's victory over Glasgow Warriors yesterday is also covered extensively this morning.
The Irish Examiner carries a picture on page 3 of Anthony Foley's 2 young sons Tony and Dan standing alongside the team as they belted out 'Stand Up and Fight' on the pitch at Thomond Park.

"Heart and Heartbreak" is the headline on the front of the Irish Times.