When the first Covid-19 restrictions hit in March, it seemed people all across the country were united by at least two things: banana bread and lack of sleep. The stress of a pandemic ramped up our need for sweet comforts and a soothing night's sleep, and at least you could whip one of those things up fairly easily.

Now, midway through our second set of tighter restrictions, we find ourselves with little sleep and too many bananas once again.

Just remembered that I used to drink banana tea (just sliced banana in boiled water, let it cool) before bedtime and it would knock you out like you owed it money

As always, it started on Twitter. Comedian Gerry McBride shared that he "used to drink banana tea (just sliced banana in boiled water, let it cool) before bedtime and it would knock you out like you owed it money". Naturally, people were intrigued.

He added that this includes the peel and all, but you don't eat the banana or peel when you drink the "tea". "Just down the tea and be sure to be somewhere it's ok for you to pass out."

Early responses were divisive: comedian Michael Fry, jumping at the chance of a night's sleep, immediately tried the method, reporting back that "first things first, it tastes rotten" but a good sleep was had.

Presenter Muireann O'Connell was another early adopter, trying out the tea on her Instagram stories soon after. "The skin is the important bit so", she wrote. "You just cut some up and lash boiling water on it and leave it to cool down."

As for the taste, she said it "tastes like slightly stewed flavoured banana water". But it was worth it in the end as the presenter said she got some much-needed shut-eye.

So how does it work? Banana tea oracle McBride shared an article on his Twitter by Mommy Potamus, a popular parenting blog, explaining why banana tea is the go-to bedtime drink for the tired and wired.

According to the article, banana peel contains magnesium and potassium, two nutrients that help the muscles of the body relax. Forbes also reports that bananas "also contain the amino acid L-tryptophan, which gets converted to 5-HTP in the brain. The 5-HTP, in turn, is converted to serotonin (a relaxing neurotransmitter) and melatonin". 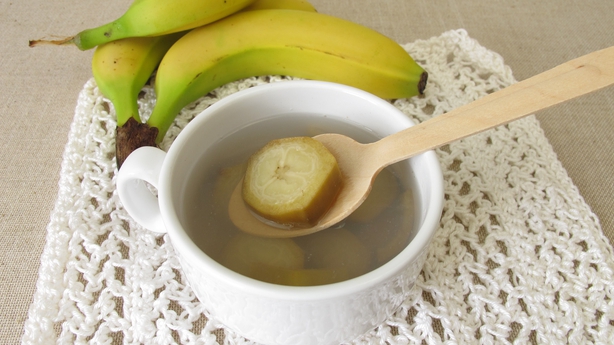 Mommy Potamus suggests using either whole banana slices or just the peel to make your tea, and drinking it an hour before bed. She even adds some vanilla extract and cinnamon to hers.

And her method is easy enough for even the most sleep-deprived zombie to make.

"Cut off the ends of the banana and slice it into a few pieces. Place it in a small pot and cover it with water. Boil for 10 minutes, then strain the banana out with a colander and drink the tea."

Now, before you start brewing pots of the stuff, it should be noted that all things are better taken in moderation. Here's what Dietitian Sophie Pratt had to say about the craze:

"Banana skins are a source of fibre, antioxidants such as vitamin C, vitamin B6, potassium and magnesium which may help improve sleep quality."

"When used in tea a small proportion of these nutrients from the banana skins seep into the water thus are ingested without having to consume the actual banana peel. However, the fruit of a banana itself is rich in the same nutrients therefore there is no need to consume the peel if you do not want to.

"Although there is no concrete evidence about the harmful effects of excessive banana tea consumption, overconsuming bananas has been found to increase the levels of potassium in the blood (hyperkalemia) and although rare due to the large amount of bananas you would have to eat in order for this to happen it could be plausible for the banana tea also."