Like all professional chefs, Mark Moriarty is no stranger to cooking under pressure. He is a chef at the two Michelin star restaurant The Greenhouse in Dublin's city centre, but for the last few months, like most others in the hospitality business, he’s had to adapt his daily life, as well as his cooking style.

When I ring him, he’s washing pots with the Greenhouse head chef Mickael Viljanen; something neither of them has done in a restaurant kitchen for many years, Right now, however, with the restaurant closed, they have teamed up with a not-for-profit initiative to prepare meals for front-line staff dealing with COVID-19 in the ICU of Naas General and Connolly Hospitals.

Mark is also preparing meals for four local nursing homes and the community support runs being made by  gardaí in Kilcullen, Co Kildare. He’s also hoping to help the rest of us face the daily challenges of eating well and feeding families at this time with his new TV show, Cook-In with Mark Moriarty which is now on RTÉ One.

"We started a Go Fund Me page and we’re using the donations to pay for ingredients to cook meals which then go to the intensive care units and the nursing homes in Kildare. We were struggling in week one to do the quantities because we’re not used to having to cook for such large numbers but we got there.

"We usually do 40 covers in the restaurant so trying to work out how to do mash for two or three hundred was fun, but we’ve got it nailed now."

Viewers might be familiar with Mark from last year’s culinary hit, Beyond the Menu, a show in which Mark showcased young talent on the Irish cooking scene. The TV chef style of presenting on Cook-In with Mark Moriarty is a new challenge for him and he admits that in a world filled with TV chefs, he’s trying to find his own style.

"I try to make it original and not copy anything or anyone. You take a lot of inspiration from what a lot of these people have done and they’re masters of that craft, but it’s my own style.

"I enjoy talking about food. I love my job and I’m very passionate about it, so it’s not exactly difficult for me. Beyond the Menu was easy because you’re talking to other chefs with the same interests and passions, so you forget about the cameras after a while.

"This is a little different because I’m in a studio, talking to a camera; the producer is in her house 20km away talking to me through an earpiece and I’m not allowed out of my little kitchen area. I’m not perfect at it, but the more you practice talking to your audience the better you get."

A former San Pellegrino World Young Chef of the Year (2015), Mark, who has also been listed on the Forbes '30under30' list and is used to cooking at the highest level, so it’s been hard for him to stick to basic ingredients for the show. "I’m constantly battling on the recipes with the producers: if it’s getting any way too fancy or with ingredients people wouldn’t have, then it’s gone. It’s about producing great meals but with store cupboard ingredients."

At only 28, Mark’s CV reads like that of someone twice his age. Very ambitious, he's dividing his time between the Greenhouse, TV work, consultancy and brand ambassador. He admits that he’s not one for sitting around, even during lockdown.

"That was one thing I noticed when we first went into lockdown; I went from doing a hundred things to doing nothing and I was more fatigued as a result. It was nice for a week or two to calm it all down from the craziness of the kitchen, but I’m raring to go again."

Like everyone, he’s worried about what the future holds for his industry, but he is optimistic that thanks to the people involved, it will bounce back.

"It’s hard to know: do I worry? Yes, I think anyone who has a job in this industry is worried at the moment, but I do believe opportunity always comes out of these things. We’ll have to wait and see and just follow the guidelines. Irish businesses are very adaptable and creative and that has been shown during this time."

To donate to Mark and his colleagues’ Go Fund Me page for their efforts in cooking for front-line staff, go to his Intstagram @markmoriarty1 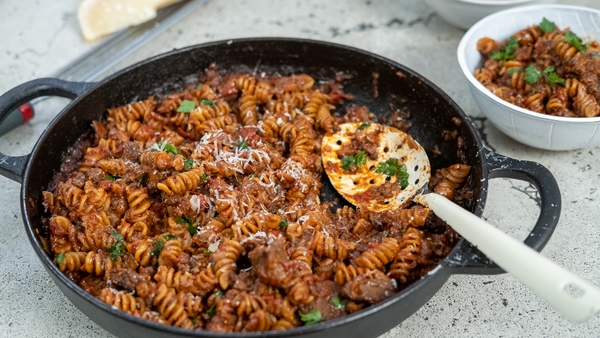 Karen Koster: "I always wanted to do well in Ireland"

Josh Gad on working with new talent in Artemis Fowl