Lady Gaga stole the show at last nights 60th Grammy Awards in a pastel angelic gown after wowing on the red carpet in a dramatic black, floor-sweeping gown which morphed into a lace jumpsuit.

The singer was nominated for Best Pop Album for Joanne and Best Solo Performance for Million Reasons and when she took to the stage she dedicated the song, Joanne, to her late aunt.

Showing her support for the Time's Up campaign, she added the words to her song and received a standing ovation at the end of her powerful performance.

Many stars wore white roses on the red carpet, including Gaga, Anna Kendrick, Miley Cyrus, and Kelly Clarkson, in support of a group called Voices in Entertainment, who are encouraging people to take a stand against sexual harassment.

Wearing an Armani Privé dress on the red carpet, all eyes were on the singer and probably one of the longest trains in red carpet history!

The singer opted for a corset braid to complete the dramatic look.

The singer later removed the skirt from the Armani Privé dress to reveal a lace jumpsuit before donning the gown for her performance on stage with Mark Ronson where she sang a mash-up of Joanne and Million Reasons. 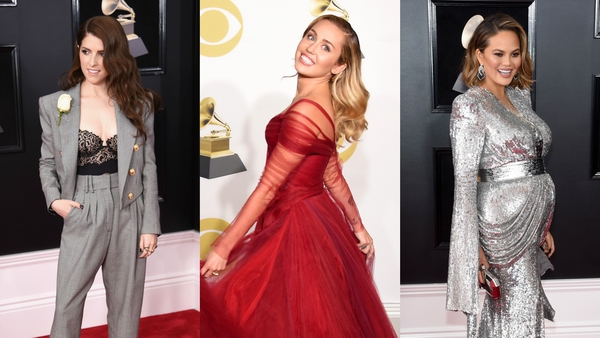