The man's got style, there's no doubt about it.

Whether he's rocking a custom-made three-piece suit, a Gucci mink or Jimmy Choo dress slippers - McGregor knows how to present himself to the public.

Born and raised in Crumlin, Conor made his professional Mixed Martial Arts (MMA) debut in 2008 at the age of nineteen. Under the guidance of coach John Kavanagh, McGregor fought his way to the top where he signed a multi-fight contract with the Ultimate Fighting Championship (UFC) in 2013.

On April 6th, 2013, McGregor fought Marcus Brimage for his UFC debut and both his win and his attitude earned him attention on a global scale. After the fight, Conor announced to the press that he would be splashing out with his winnings:

"I'm going to buy myself a car anyway, a nice car and I don't know... Just last week I was collecting the social welfare".

Irish fans rallied around the Crumlin man and he was quick to become the country's champion after he knocked out Diego Brandao on 'UFC Fight Night Dublin' in July 2013 and shouted the famous line:

Since becoming the first two-division champion in UFC history, McGregor has remained true to his word on both counts. Not only has he raked in more money than he knows what to do with but he's been using it to fuel the Irish economy by treating himself to a fleet of cars and suits.

Conor's passion is never limited to just one subject. GQ Style made him their spring cover star because they thought he had "as much fun shopping and getting dressed as he does mushing opponents' faces in the octagon."

Voted as 'Most Stylish Man' at the VIP Style Awards in 2015, the UFC fighter proves that a good barber, an excellent tailor, and a reported net worth of $22 million can do a man wonders.

The Sun reported that Conor’s net worth is believed to be made up of $18 million in salary and winnings and $4 million in sponsorship and endorsements. Quite the turnaround for a man who was collecting social welfare in 2013.

Thank you @TIME magazine and @Schwarzenegger for including me in this years "TIME 100 Most influential people" list 🙌 pic.twitter.com/bW9tsRoQHR

In 2017, one of Crumlin's own made TIME magazine's '100 Most Influential People' list and, needless to say, he was chuffed about it.

Arnold Schwarzenegger praised the star for his "razor-sharp" and "contagious energy".

"The Dublin native is razor-sharp, disciplined and charismatic. His energy is absolutely contagious, to the point where you almost start shouting in an Irish accent after 30 seconds of hearing that world-famous mouth," he wrote.

In 2015, McGregor became the first European to be signed to Reebok. And with a penchant for Jimmy Choo dress shoes, Dolce & Gabbana loafers and "Custom Irish" Reebok trainers, it's safe to say that the UFC champ's shoe collection has expanded.

Conor's partner, Dee Devlin, told ESPN's Brett Okamoto that some of his shoes even have their own passports: "He's kind of gotten into animal skins recently. He had already bought one pair of shoes that have a travelling passport because they are made of python skin."

"So, the other day, we went to the shops on the Las Vegas Strip and he bought a pair of caimans, which I think is crocodile or something, and we brought them home and I said, 'Conor! These shoes have a passport, too!'"

In the above Instagram photo, McGregor is said to be wearing a 15k Louis Vuitton mink coat, a 30k David August suit, a 50k Rolex watch and Tom Ford shoes. As you do.

McGregor's stylist David Heil, CEO of David August clothing, spoke to TMZ about Conor's custom-made suits: "Every outfit I make for him takes 60 hours. He likes to wear his suits high and tight and really tailored."

According to TMZ, each custom suit ranges from $4,000 to $10,000 and the Notorious orders eight to ten outfits for every media tour.

After his featherweight victory over Chad Mendes in Las Vegas last year, McGregor celebrated by picking up 'His n' Hers' Audemars Piguet diamond encrusted Royal Oak watches for himself and partner Dee. The price tag for each watch lands somewhere between €30,000 to €50,000.

Speaking to The Guardian, he revealed that he often celebrates his wins with his wallet.

"We went shopping for ten hours straight yesterday. I got us a limo and we stuffed it with shopping bags so it was a great day and then we had a great night,"

Of course, it doesn't end there. Conor's watch collection ranges from a $150 Diesel wristwatch to a Patek Philippe timepiece worth approximately $62k. His impressive assortment of Rolex pieces even earned him the cover of Haute Time, a magazine dedicated to top luxury watch brands.

When it comes to sunglasses, Conor favours Paul Smith, Ray-Ban and the designer eye-wear brand DITA which cost approximately $700 a pop. Not to mention the amazing flip-up sunglasses he wore to the Grand National this year.

According to the website CarKeys, the "champ champ" is believed to have a series of cars including a white BMW i8, a Cadillac Escalade, a Rolls Royce Dawn, a Mercedes-Benz AMG s500 Coupe and the only Lamborghini Huracan Avio in Ireland. To name a few.

Not only that but the notoriously generous McGregor bought new cars for his girlfriend, sisters and parents along with paying off his parent's mortgage.

As Tony told Ryan Tubridy on RTÉ Radio 1: "He's going to buy the house off us and we'll hold the lifelong interest so it's a huge gesture. I mean, we're really, really lucky about this."

So there you have it. Whether you love him or hate him, you have to admit it - the Crumlin man has style. 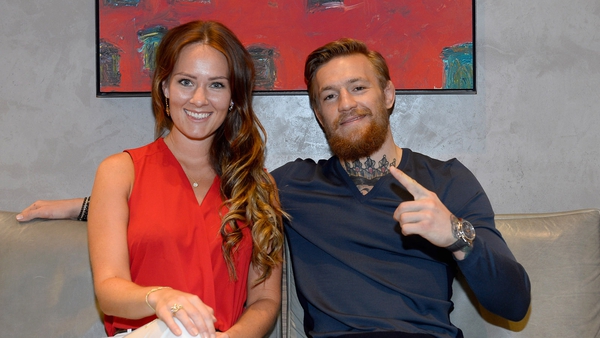