Last Autumn Alice and Florence caught a wolf spider in their house, and they sent in the question: why do spiders have eight eyes, and we only have two?

It's a great question, but not one we could answer by ourselves. So we called in arachnid expert Collie Ellis, a researcher who not only studies these creatures, he also houses them too.

"I have hundreds of spiders and tarantulas and scorpions and invertebrates. I have thousands of cockroaches, different species of cockroaches. And then when you’re getting into frogs, in my garden alone, I don’t know, frogs and newts, native species, I have hundreds and hundreds of them that are basically living wild in my estate," says Collie, when we ask him how many pets he has living with him. He also has snakes, a skink, toads…the list goes on!

I cannot imagine having so many pets. Can you?

So, what can Collie tell us about spiders, and why they have eight eyes?

So, when it comes to eyes it's "spiders eyes for spiders lives…Spiders live very different lives than me or you, or most mammals," says Collie. Basically, our eyes have evolved to be the way they are so that we can see food easily and so that we can see where the food is. But also, we have a neck; we can turn our heads very easily to see things to the left and right.

Spiders, they don’t have a neck! So, to avoid being snuck up on by predators, they need more than two eyes. Some spiders, like the jumping spiders, have evolved to have eight eyes that go all the way around their heads, so that they can see all around them.

However, other types of spider don’t have any eyes at all! Cave spiders, which live in caves (obviously), have no eyes: they are completely blind. Instead of using a sense of sight, they use other spidey senses.

Spiders build webs to catch their food. But the webs also act as an extension of their limbs. So, as some prey, like a little bug, lands in a web it wiggles around trying to escape. This makes the web vibrate around it, and these vibrations are felt by the spiders, and so they can find their prey.

Why don’t you try to see if you’ve got spidey senses? When you can, why not go to a playground with one of those pyramidal rope climbing frames? Climb safely up into the middle, spread your limbs out so they are in contact with different ropes, and close your eyes.

Get your family and/or friends to climb on and see if you can guess where they are on the web!

Now we know not everyone has one of these climbing frames in their local playgrounds, and not every one can make it out to a playground at all at the moment, but that doesn’t stop us!

We can help you make a mini spiderweb at home so you can play this there too.

4) Scissors - always be careful and have an adult with you when using a scissors!

Here’s what you need to do to build your web:

1) Put the push pins in a circle onto the cork mat. To make it simple, if you follow the arrangement of a clock, put pins in position 12, 3,6 and 9 o’clock, and then one in between each of those

5) Continue with this until thread is looped around each pin and you have thread lines going diagonally across your circle.

6) Cut the thread with scissors and tie the end to one of the threads on the web. 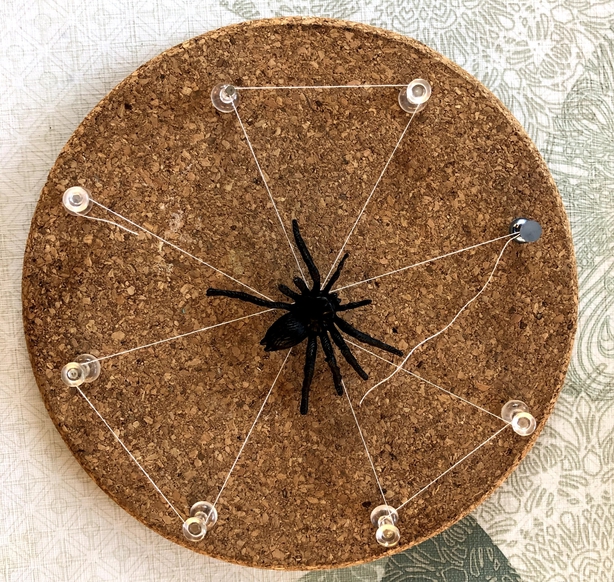 To play the game, draw a little spider on your index finger, put on the blindfold and then carefully place your finger/spider onto the web, right in the middle.

Then get your playmate to gently touch one of the threads. Now see if you can sense where they are and catch them! You can take it in turns to play.

One of the other amazing things that baby spiders do is something called ballooning. This doesn’t mean that they blow themselves up like a balloon, or turn into balloons! It means they can fly, in a manner of speaking.

Baby spiders, or slings, when they hatch, they find a high point near to where they are and stick their bums in the air, and wait for a breeze or some warm air to come by.

They then release a little bit of their silk from their spinnerets (the silk making gland in their bum). "And that silk will catch in the breeze…and off they go!" says Collie. "They’ll go up in the stratosphere, miles and miles up!"

And just by adjusting its position, spiders can change their speed and direction, even when they are miles above the ground.

So, now it’s your turn to make your own spiders and do some ballooning!

3) Scissors - always be careful and have an adult present when using a scissors.

Here’s what you need to do to make your little spider-lings, or slings:

1) Cut two pieces of black thread, each about 4cm long.

3) Cut about a piece of white thread, about 10cm long

4) Lay the white thread on a table and place the folded black threads on top, near one end

5) Using the white thread, tie a knot around the middle of the folded black threads

7) Cut the shorter end of the white thread, right up close to the know. 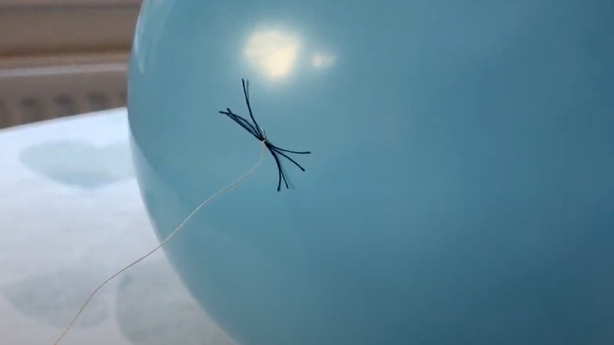 Now grab your balloon and inflate it and secure it so it doesn’t deflate. This is a fun bit, so make sure you’ve got a camera ready: rub the balloon on your head for about 30 seconds. If you can, take a photo of your hair when you slowly take the balloon away!

Now, very carefully, and without touching the spider with the balloon, see if you can "pick up" your tiny spiders with the balloon. You might hear some static clicks. If you manage to pick up your spider, how far can you carry it without it falling off the balloon?

So how does this ballooning spiders game work? When you rub the balloon on your hair you create some static electricity. By rubbing the balloon, you make your balloon negatively charged and your hair positively charged.

If you want to find out more cool things about spiders, like how where the big spiders live, or how long they live for, make sure to listen this episode of Let’s Dive In! up at the top of this article.

We’ve also got a new show on the After School Hub podcast called Maths Matters, which is all about why maths is important in our everyday lives. Expert interesting maths facts, fun maths sketches and dreadful accents!

Our first episode was all about numerals and you can check it out HERE!

Sadly, this is our last episode of this season of Let’s Dive In.

BUT DON’T PANIC! We will be back later in the year with some more episodes. So, if you’ve got any science questions in the meantime, why not send them in to us?

You can use our social media hashtag #LetsDiveIn to send your questions or email junior@rte.ie.

All the Home School Hub podcasts are in one place HERE.