The Muslim festival of Eid al-Adha was celebrated at the home of the GAA, Croke Park, again this year.

The Irish Muslim Peace and Information Council are helping to organise the event and they tell us more about the important festival here.

Watch today's celebration on RTÉ News at the top of this article and read more here!

On Eid al-Adha, Muslims remember the Prophet Ibrahim (called Abraham in the Bible) and his willingness to sacrifice his son for God.

Muslims believe that God tested Ibrahim's faith and when he proved that he was ready to sacrifice his son, God told him to sacrifice an animal instead.

On the day of Eid, as well as praying and visiting family, Muslims still sacrifice animals and distribute the meat to poor families in their neighbourhood so that they can have nice food to celebrate the occasion.

Eid al-Adha also marks the end of the Hajj - the big pilgrimage to Mecca performed once a year. Normally, millions of Muslims from around the world attend, but this year only a few thousand will be allowed to attend once they have been fully vaccinated. 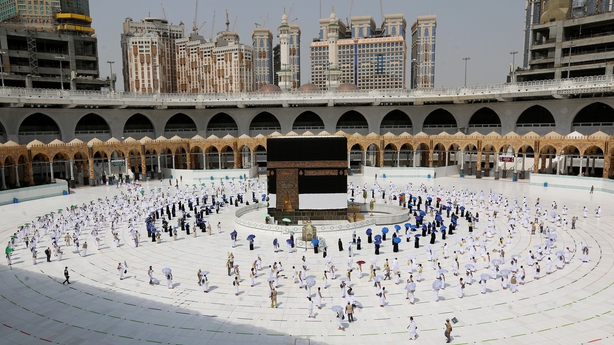 Eid al-Adha is the second biggest festival for Muslims after Eid al-Fitr - the "big" Eid that comes after fasting in the month of Ramadan. The Eid prayer (called the Salat al-Eid in Arabic) is prayed in open grounds or parks, and in some parts of the Muslim world grounds are kept aside all year long for the two Eid prayers.

People wear new and sometimes bright coloured, fancy clothes to the Eid ground. In Ireland, Muslims normally pray the Eid prayer in the mosque, but since last year, they have prayed in Croke Park because of the Pandemic.

After the Eid prayer, families will get together and visit each other, and children will get gifts - called Eidi. Santa doesn't come on Eid but children still have to be well behaved!

Everyone will cook their favourite foods on the day and share big meals as a family. Food is varies throughout the Muslim world. In Arab countries, the lamb is often cooked whole with rice, whereas kebabs are a staple in the Indian subcontinent.

People will remember family members in other countries who they can't see on the day and probably speak to them on video calls to see one another's new outfits.