Hello everyone, welcome back to Let's Dive In! Julie and Phil always love to get questions from you all and this week there is a great one from Harry who asks: Can you walk on Jupiter?

Here Julie is going to tell us more and explain some cool experiments you can try out.

IF we could actually get there, we’d discover that you can’t actually stand on Jupiter. "It would be like trying to walk on a cloud," says Tom McCormack, our expert for this episode.

Tom tells us that theoretically we could fly through the clouds of hydrogen gas on Jupiter, all the way to the middle of the planet and stick a flag in it…but we probably wouldn’t survive the trip.

So what would happen if we had all the cool technology to actually get to Jupiter in a space ship, and go through all the gasses to the middle? What would we see on the way down?

Very little, it turns out.

As you approach from the outer layers, it would start out quite cold because the planet is so far from the sun. But as you travel further into the gas clouds it gets darker and darker. And the pressure gets greater and greater because of the weight of the gas clouds above you.

At this point it would also start getting warmer and warmer, with all those gas clouds squashing you from above, the pressure would start heating things up a bit.

Eventually all the light from the sun would be blocked out, and everything would be completely black.

All the gravitational forces and pressure from the outer layers of gases would be squashing the inner layers of gases so much that they would actually form a hard, central rock, light in the middle of Jupiter. A big ball of solid metal hydrogen, so scientists think. What does this look like? Well, no one knows.

Let’s get the torches out now… 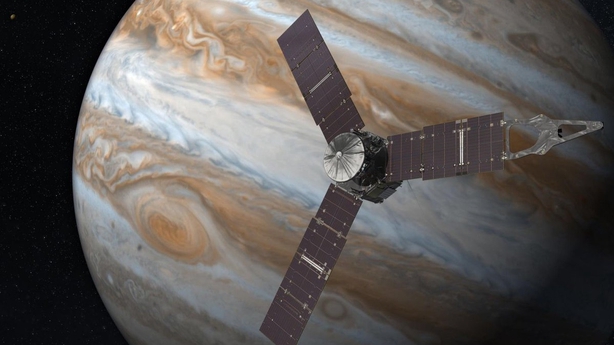 There is actually a spacecraft out there, called JUNO, which is orbiting Jupiter to try to find out more about the planet.

Whilst dipping in-and-out of the planets outer layers of gas, JUNO will be experiencing huge changes in pressure, and in the episode we also do a little experiment to talk about changes in pressure and what impact that might have on materials.
What we’re making is something called Oobleck: and when you apply pressure to this strange liquid, it can behave like a solid.

NOTE: This experiment doesn’t explain EXACTLY what happens on Jupiter, it just gives you an idea of what happens...

What you need to do:

The consistency you’re looking for is a bit slimey. You want the material to feel like a solid ball when you’re squeezing it with your hands, but then when you let it go, it will just flow through your fingers like a slightly sticky liquid.

Have a listen to this episode – I make a giant bucket of this super cool slimey goo for Harry and his friend Dexter so they can pretend to be on Jupiter! Plus you’ll learn a bit more about what JUNO is learning about the planet, and that really, we’re all made of stardust!

Catch up on ALL the shows so far: SUBSCRIBE HERE

And if you have any questions email them to junior@rte.ie.