The real meaning of Bloody Sunday lies not in grand historical narratives but in the personal pain and the legacy of trauma of those who were bereaved.

How did Jerome O'Leary cope with the death of his young son, also called Jerome? He was just ten years of age and from 69 Blessington Street in Dublin. He was murdered as he sat on a wall behind the Canal End goal, watching the early stages of the match between the footballers of Dublin and Tipperary. His body was later identified at the Mater Hospital by his father who said simply: "He was a schoolboy." 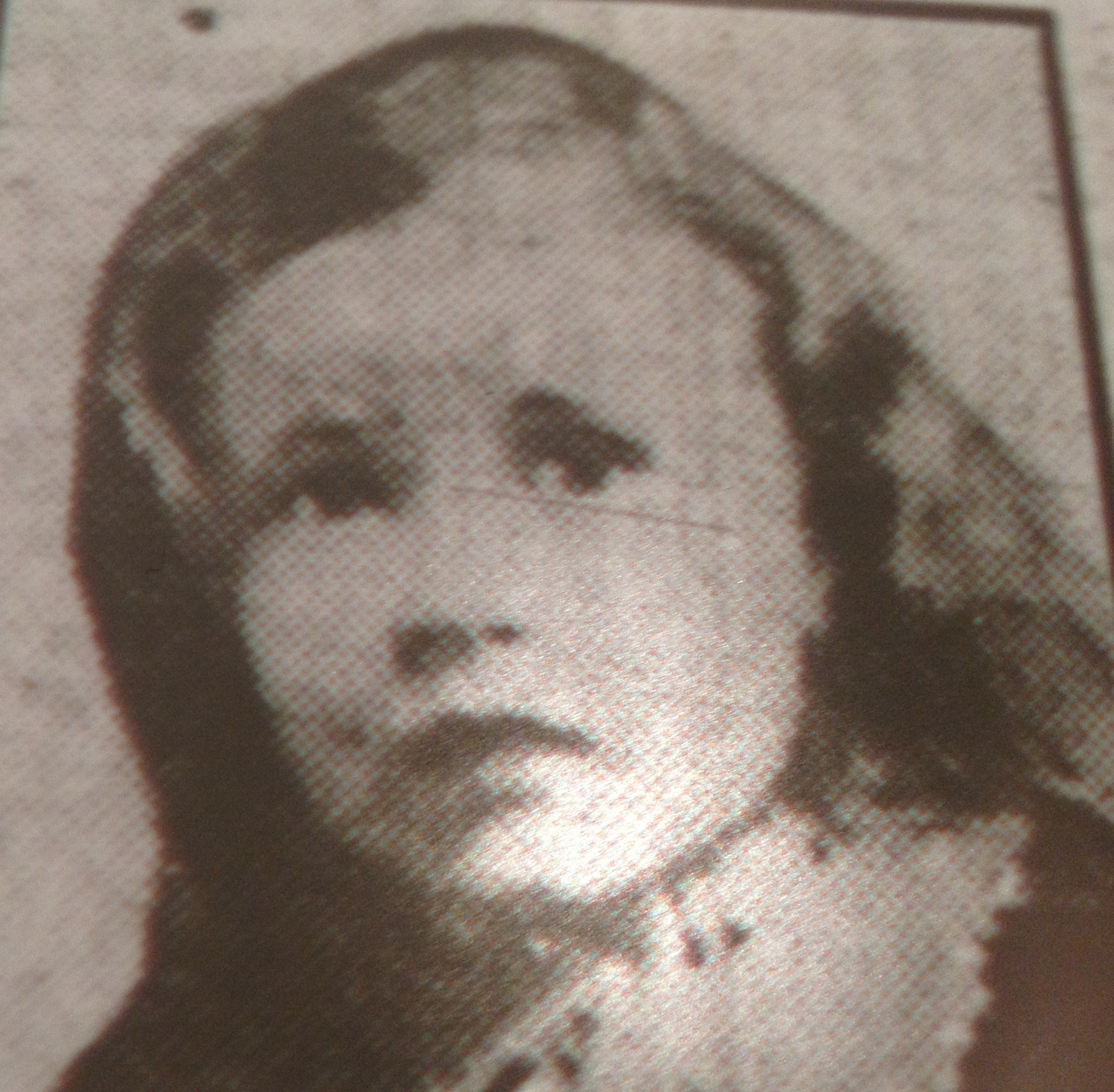 How did Bridget Robinson cope with having to go on a Sunday evening from her house on Little Britain Street across to the old Drumcondra Hospital where her son William lay? William had been sitting in a tree watching the match when a bullet ripped into his chest and out through his shoulder, throwing him to the ground. He fought to survive, but he could not be saved.

Bridget Robinson, herself, was just 29 and her dead son was 11. How did she cope? And how did her husband Patrick cope with having been in that hospital as a surgeon fought to save the life of his son, who was nicknamed 'Perry'?

The events of 'Bloody Sunday' in Croke Park quickly took on a national historical significance which occluded the suffering of the bereaved. This is what ordinarily happens in time of war: the rollcall of the dead is absorbed into a conflict.

Death becomes another thing to be fought over. And once that happens, reclaiming truth becomes almost impossible and protecting the place of the actual people who lost their lives or who had their lives destroyed is subverted.

What happened in Croke Park on Bloody Sunday passed into the story of the Irish revolution. It became a key reference point, presented as evidence of the brutality of the British regime, of callousness and cruelty, of disregard for the lives of the 'mere' Irish.

It was the ultimate indictment of empire. And that the brutality of the murders in Croke Park was compounded by the crass denials and coverups that inevitably followed was further proof of what lay at the heart of British rule in Ireland.

A ticket for the fatal match

Naturally, Bloody Sunday also became a touchstone in the history of the GAA. In independent Ireland, the legacy of Bloody Sunday included a real and genuine desire to remember those people who had been murdered at a Gaelic football match. The naming of the Hogan Stand – after Michael Hogan, the Tipperary player who died in a pool of blood on the field where he was supposed to be playing a game – and the subsequent unveiling of plaques were rooted in a sincere sense of loss.

But Bloody Sunday also got absorbed into the GAA's own history in a very particular way. In independent Ireland, it was pushed forward time and time again as compelling, incontrovertible evidence of the GAA's identification with nationalism and, in particular, with the nationalist struggle which led to the establishment of the Irish Free State.

More than that, it also became something that could be thrown at the GAA's rivals. Down in Waterford in 1931 – in the midst of a dispute between the GAA and soccer – the chairman of the Waterford GAA County Board, Willie Walsh, asked where the Rugby Union, the Soccer Association or the Hockey Association were on Bloody Sunday?

He noted that the Black and Tans had not gone to Dalymount Park or Lansdowne Road to look for rebels. Instead, it was at Croke Park that they 'performed deeds which shocked the civilized world. They knew friend from foe, and it was an unfailing experience. The tans did not run into men like the directors and players of Waterford soccer club.' 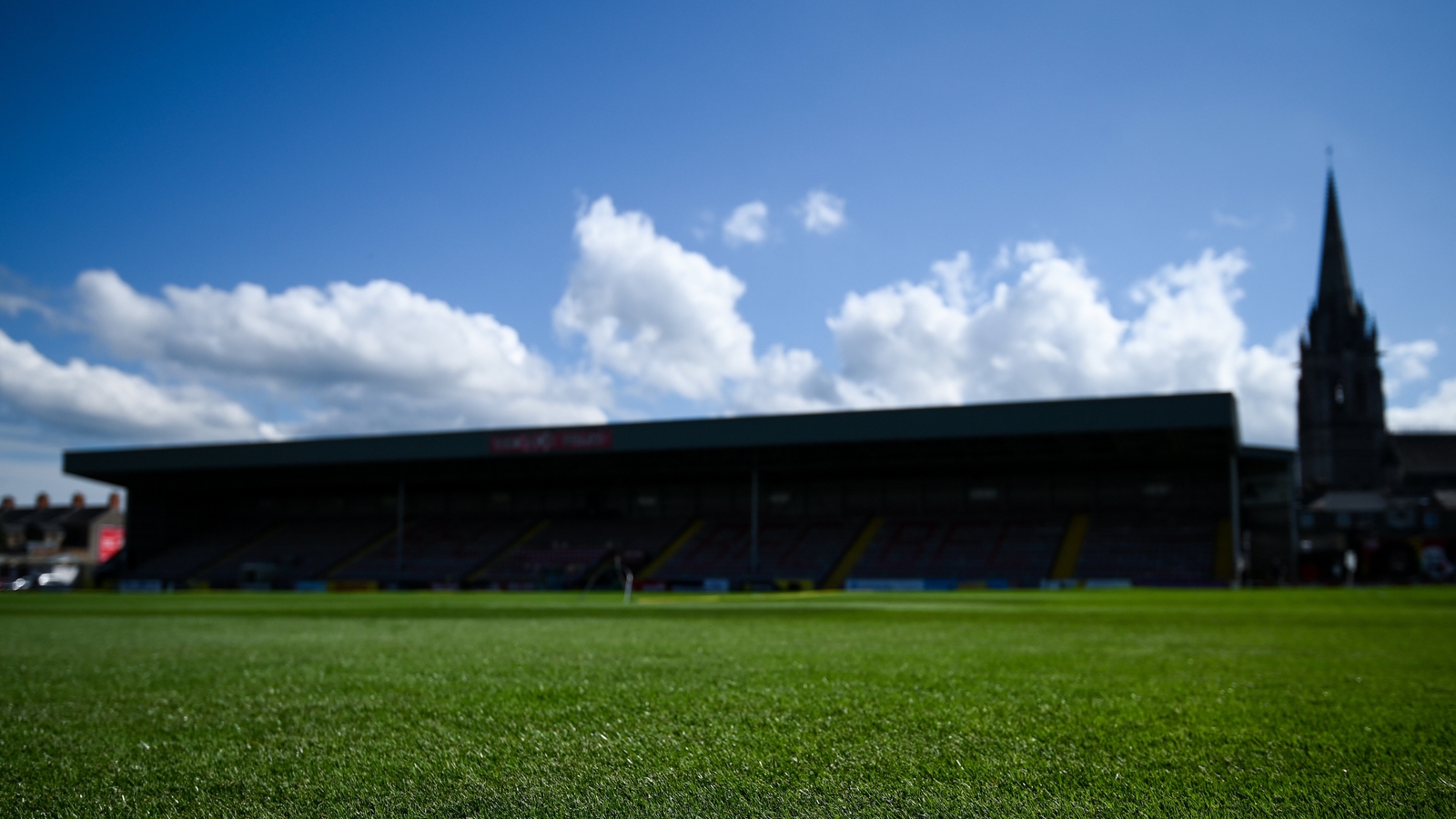 Dalymount Park, Dublin. In the 1930s the GAA pointed out that the Black and Tans had not chosen to go to the soccer pitch there to look for rebels

The backdrop to this was the enduring desire of the GAA to imagine that it was in the vanguard of the revolution. The reality is much more complex. This reality tells the story of an Association which, instead, by 1920, reflected the growing radicalization of Irish society.

There were some GAA members who were radical before and during 1916 – but almost all were not involved in the Rising. Indeed, the number of GAA men who were fighting for the British army in the Great War emphasizes the extent to which the GAA was made up of moderate nationalists.

Perhaps the greatest evidence of how this changed during 1917 and 1918 is to look at the relationship between the British government and the GAA's leading officials. In the immediate aftermath of the 1916 Rising, the GAA sought to engage with the British authorities to safeguard the organization's sporting operations.

The first episode concerned the attempts of the government to enforce an Entertainments tax on sporting and other recreational bodies throughout the United Kingdom. While awaiting a decision that followed a request that the GAA be exempted from this tax, the Central Council of the GAA took the initiative and sent a deputation to General Sir John Maxwell in an attempt to secure GAA exclusion from taxation and to arrange for the provision of special trains to GAA matches.

It speaks volumes for the priorities of the GAA that it should attend a meeting with Maxwell. 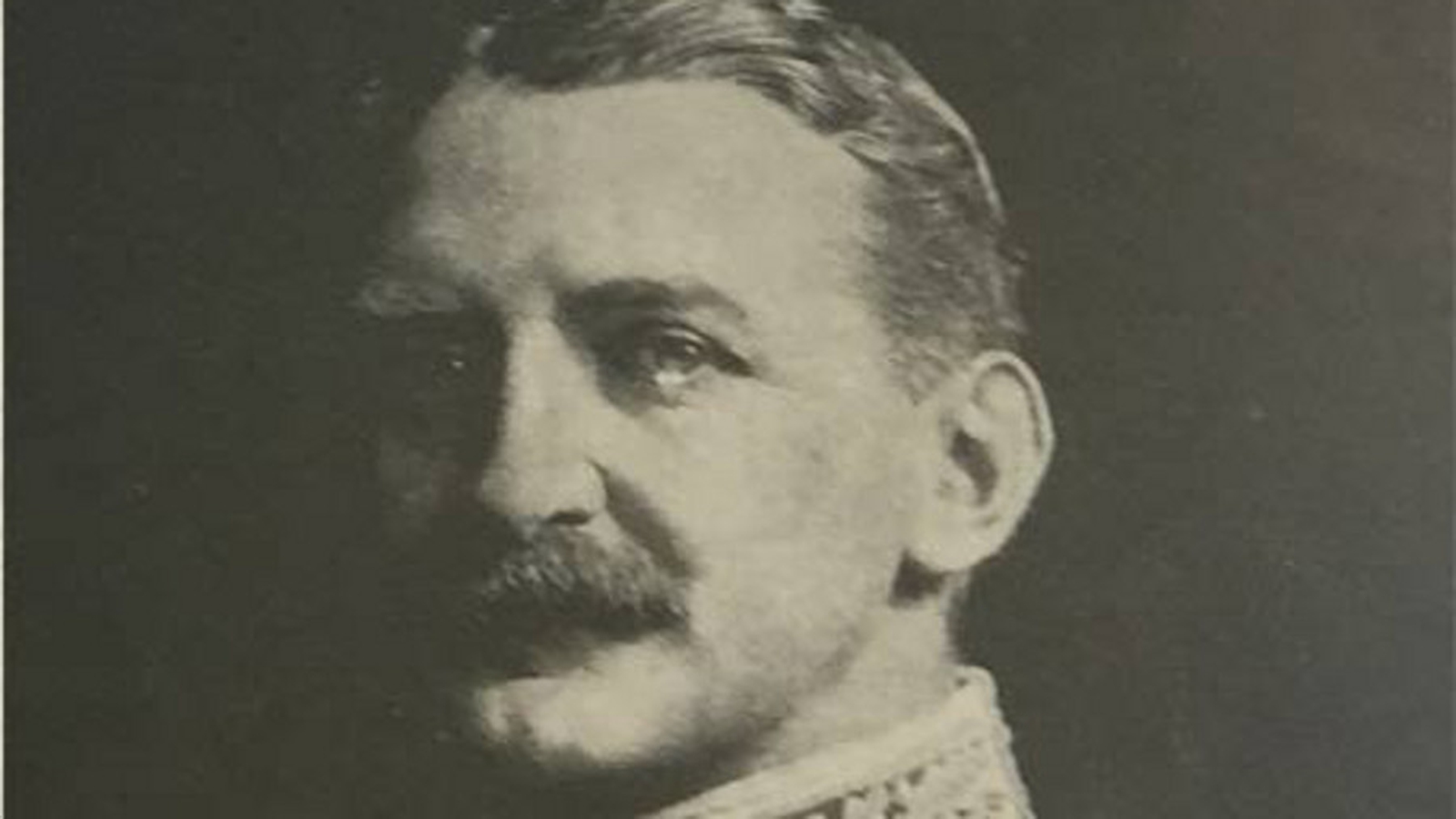 Sir John Maxwell. The GAA sought to meet with him after 1916 to secure GAA exclusion from taxation and to arrange for the provision of special trains to GAA matches.

After all, it was Maxwell who had been appointed Commander-in-Chief of the British Army in Ireland during the Rising. Using extensive martial law powers, he crushed the rebellion. In its immediate aftermath, he was the chief architect of government policy and oversaw a series of courts martial which saw 171 prisoners tried and 90 death sentences imposed.

Fifteen of those death sentences were carried out over ten days in May 1916. It was also Maxwell who had presided over the internment of more than 2,000 of the 3,500 men and women arrested after the rising.  Most of this number had no connection with the Rising and included hundreds of GAA members.

And yet the Central Council of the GAA was prepared to meet Maxwell – and prepared to do business with him.

But as the Great War lingered on and as public sentiment became to change in respect of how the rebels of 1916 were viewed, the GAA began to shift position.  In the week after the 1916 Rising, the GAA had issued a statement denying any involvement and rejecting any suggestion of such involvement.

Now though, as 1917 progressed, it began identifying with the emergence of Sinn Féin as a potent political force, one that was in the process of destroying the old Irish Parliamentary Party.

When Clare paraded before matches in the 1917 All-Ireland Football Championship, they did so in front of a banner which read: 'Up De Valera'; it was a marked change from 1914 when they had paraded behind the name of Willie Redmond, the Irish Parliamentary Party MP. De Valera during the 1917 campaign. The Clare team paraded before matches in the 1917 All-Ireland Football Championship with a banner expressing their support.

A change of attitude

By 1918, any possibility that the GAA might seriously consider negotiating with the British authorities in Ireland had vanished. The upturn in militant nationalist sentiment in the country as a whole permeated the GAA.
When the secretary's position of the Leinster Council of the GAA came up for election in 1917, it boiled down to a contest between the devoutly Republican Jack Shouldice and the apolitical A.C. Harty.

Shouldice had been interned and was spoken for at the meeting by his fellow radical Harry Boland.
The result was victory for Shouldice by 16 votes to 1 (with Harty presumably being the one who voted for himself).

This increased militancy came to the fore in April 1918, when the GAA joined a broad alliance of nationalist bodies and the Catholic Church in opposing British government plans to introduce conscription to Ireland as the Great War dragged on.

The GAA pledged 'to resist by any means in our power the attempt conscription of Irish manhood, and we call on all our members to give effect to the foregoing resolution', and its leaders shared campaign platforms with trade unionists, church leaders, and politicians.

This militancy was further evidenced by the playing of numerous matches in support of the Republican Prisoners' Dependents' Fund, with republican leaders such as Eamon de Valera and Michael Collins frequently in attendance.

It was in evidence also on the retrospective admonishment of the Central Council of the GAA for having entered into negotiations with General Maxwell in 1916. The Central Council of 1918 was not likely to make such a move; indeed, it worked instead to push the GAA towards greater militancy. 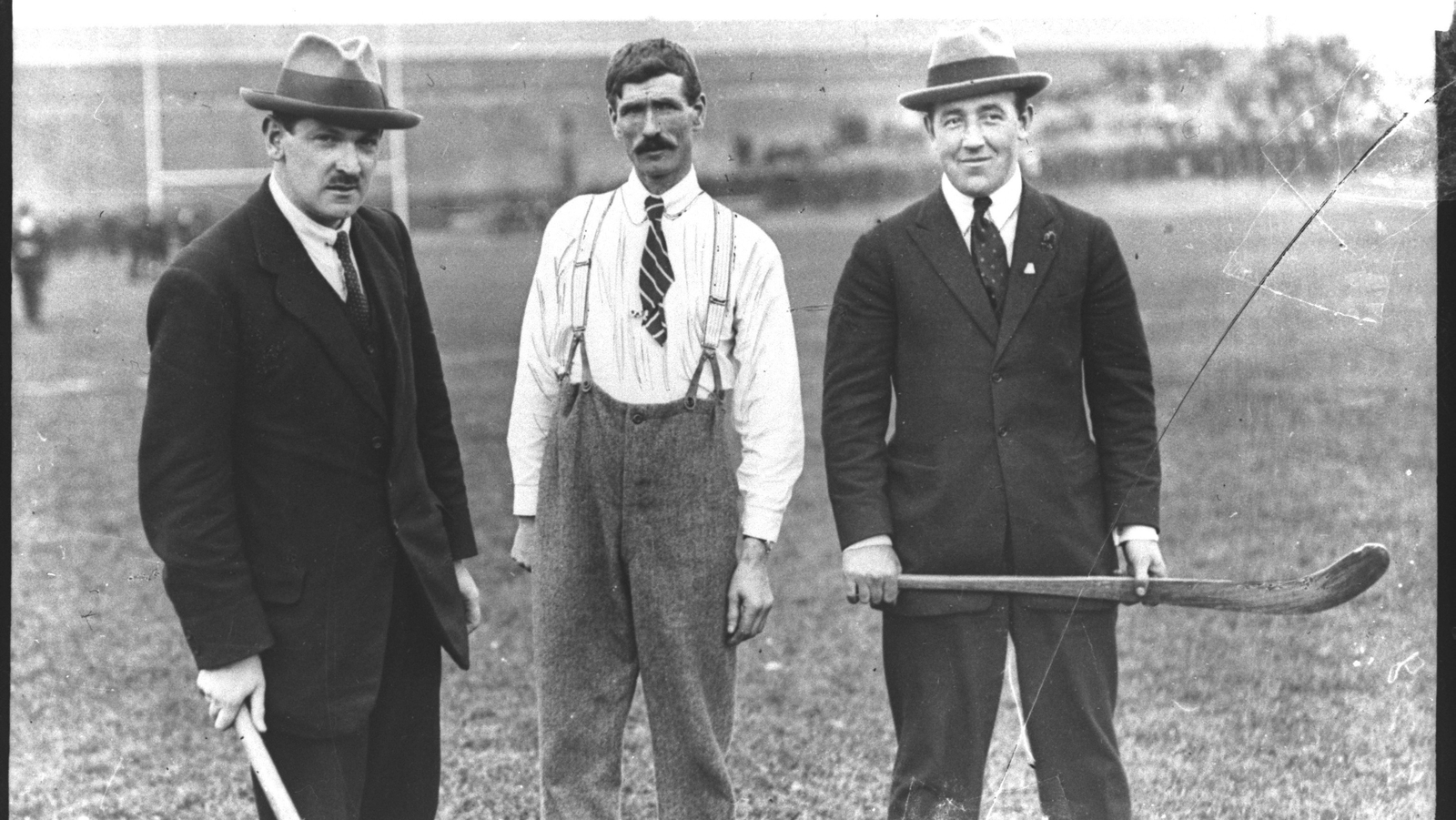 At a meeting in December 1918 it resolved to exclude from membership of the GAA anyone who signed the new Oath of Allegiance, pending a definitive decision by Congress in the spring of 1919. The Oath of Allegiance had been introduced for civil servants and other state employees in early November 1918 under the provisions of the Defence of the Realm Act.

The difficulty for the GAA was that many of its members – including some of its most prominent ones – worked in the civil service or as teachers and were now placed in the invidious position of having to choose between their livelihood and the Association.

It meant that, for example, the president and chairman of the Leinster Council of the GAA now stood down, despite the service they had given the Association for many years.

In early 1919, the Annual Congress of the GAA duly debated whether civil servants who took the Oath of Allegiance should be banned from the Association. There was much opposition to the move but, after a long and acrimonious debate, it was the speech of Harry Boland that was remembered as eventually swaying many delegates in favour of the ban. 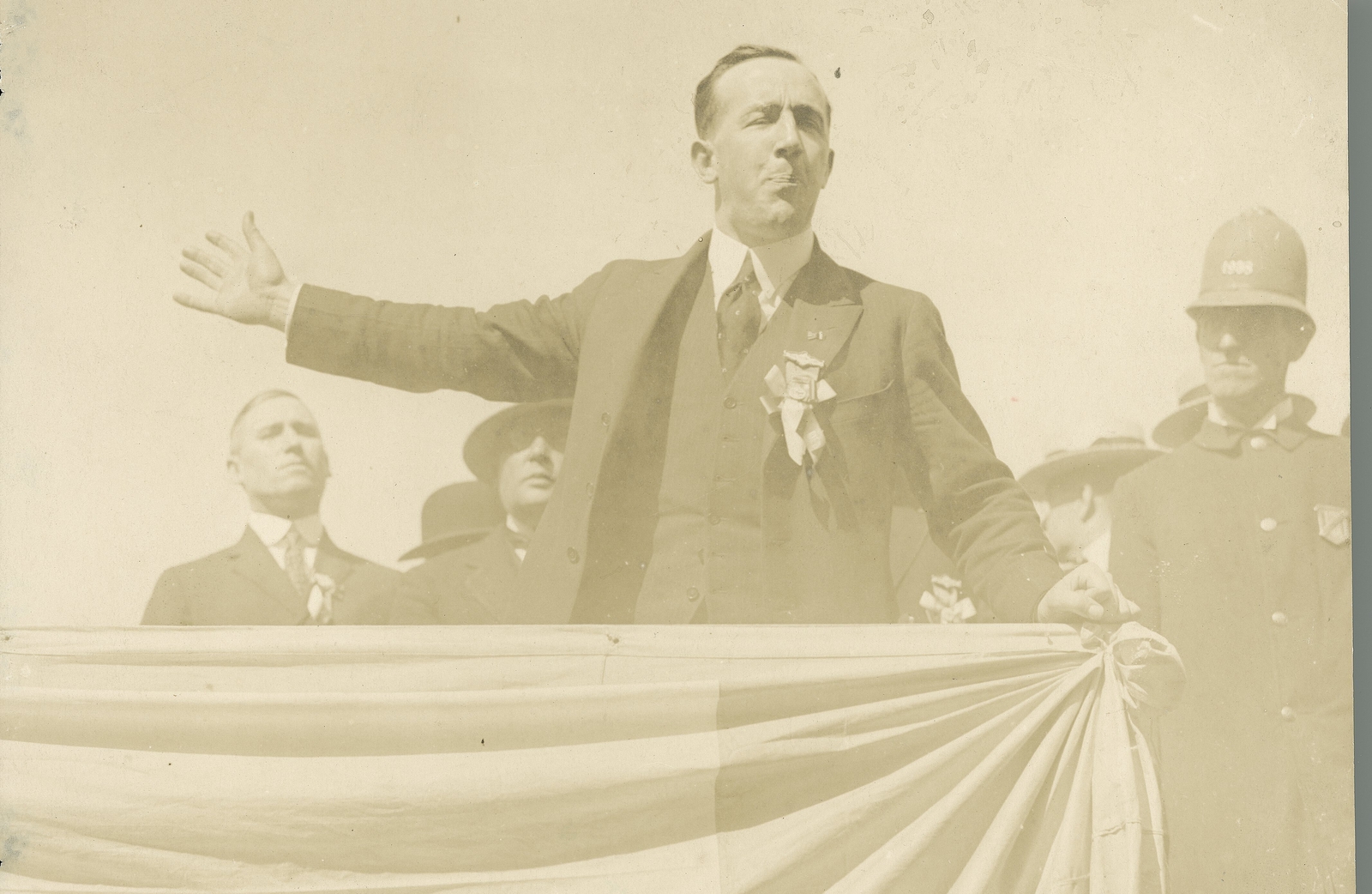 In a passionate oration, Boland claimed that the GAA 'owed its position to the fact that it had always drawn the line between the garrison and the Gael.'

Amidst a torrent of rhetorical patriotism and appeals not to break ranks and capitulate to British designs, the decision was taken to retain the ban on civil servants being members of the GAA.

It says much that for 99 years after Bloody Sunday, Jerome O'Leary lay in an unmarked grave. By then, the story of his murder had been painstakingly told by Michael Foley is his book, The Bloodied Field in a manner which foregrounded the story of all those who died in Croke Park.

Indeed, Foley's book took the personal stories of those who were murdered and humanised them by moving them beyond a simple roll-call of the dead. Most of all, those who died emerged as individuals, rather being assembling into an collection of 14 people who were murdered at a football match in time of war. 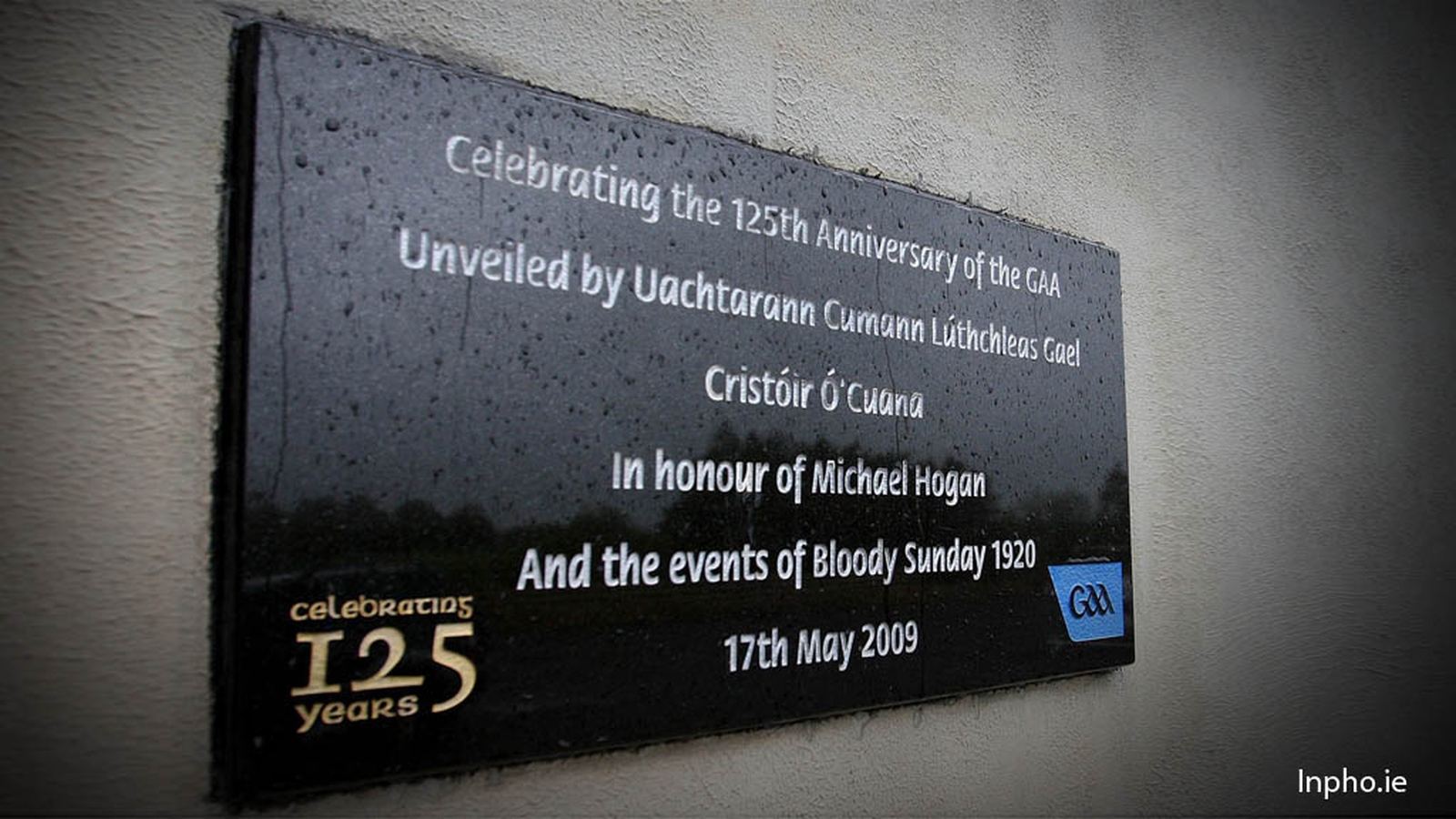 The monument to the dead of Bloody Sunday at Croke Park 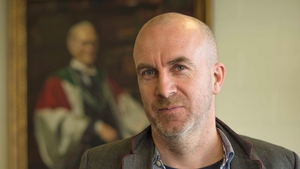 Paul Rouse is professor of history at University College Dublin