Now that the semi-finals are over - hard luck Ireland - it's time to take a look at the six countries that automatically qualify for the Grand Final.

As per usual the so-called 'Big Five' countries (so named because they stump up the most money) and the host nation have already booked their place in Saturday's Eurovision Song Contest Grand Final - but do any of them stand a chance at being crowned the winner?

Recently the Eurovision has seen its fair share of runaway favourites clinch the title (Norway in 2009, Sweden in 2012/2015) and this year Italy is definitely heading in that direction. Since Francesco Gabbani's song (Westerner's Karma in English) was selected, the original version of the song has clocked up an astonishing 100 million plus views online, so it's fair to say the public vote is in the bag.

Not only is it a clever mediation on materialism and appropriation of Eastern philosophy (seriously!) and sung in a native language - it even features a dancing gorilla! At the moment it's not even worth your while betting on it, it's that far ahead with the bookies.

With the second best song of the so-called 'Big Five' France has been going through a bit of a purple patch of late in the Eurovision. Last year's J'ai Cherché by Amir was a huge hit around Europe and came in a very respectable sixth place in the competition.

This year they're back with another strong entry, an addictive and sweet French melody that should secure them another top ten finish.

An apt song title if ever there was. After an abysmal run in the Eurovision in recent years - not helped by their penchant for sending washed-up former stars like Blue, Engelbert Humperdinck and Bonnie Tyler - the UK might just break their rut of finishing in the bottom five with this soaring ditty, sung by a former X Factor contestant and written by former Eurovision winner Emmelie De Forest.

Sure it's no winner, but its a damn sight better than the rubbish they've sent in recent years.

A breezy summer track that's light, fluffy and hasn't a hope in hell of doing that well in the contest, but we think it's a bit of a guilty pleasure. Expect to hear it near a pool later this summer at the very least.

Poor old Germany. They just don't seem to give a fig anymore. After finishing last the past two years, this year's effort is a tad better, but only just.

Robbing a few chords from Titanium might not have been the best move when the song fails to go anywhere and will struggle to be remembered by anyone on the night.

Ukraine are clearly taking a leaf out of the Fr Ted handbook - in other words, 'it was lovely hosting the competition but here's a rubbish song to ensure we won't be asked again'. It gets a bit of kudos for being the only bona fide rock song in this year's competition (did we mention there's a lot of ballads?) but that's where the plaudits end.

Generic metal at it's best, this is something to accompany a montage in a Marvel summer blockbuster at best, not to win the Eurovision. 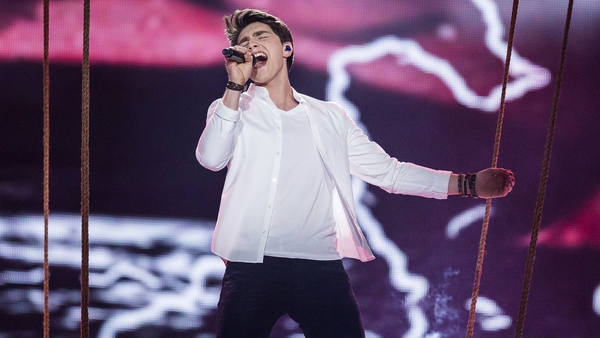 Eur out - Disappointment for Ireland in Eurovision again eurovision 2017